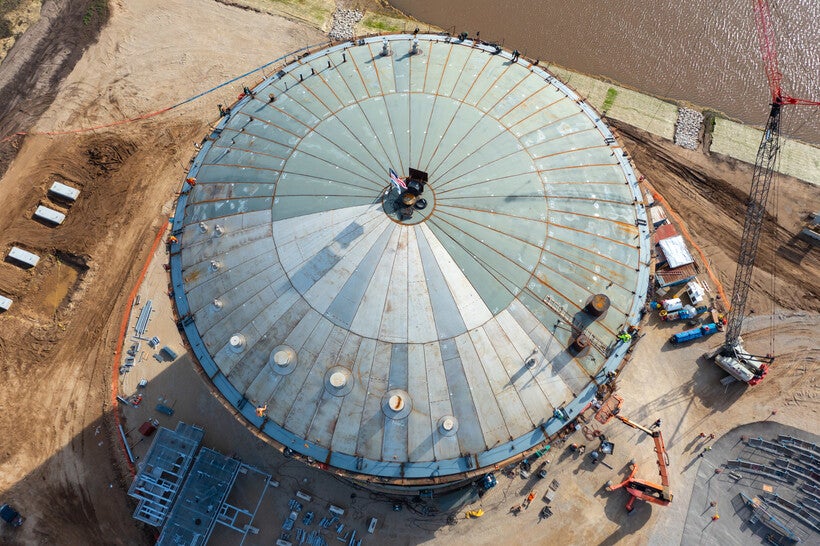 We Energies is constructing natural gas storage plants in Jefferson and Walworth counties, including its Bluff Creek facility in the town of LaGrange. The utility made a call for customers to conserve natural gas in December due to extreme cold and an outage that led to a shortage of gas from one of its suppliers. Photo courtesy of We Energies

Catherine Bresser had canceled plans to travel from Milwaukee to Detroit for Christmas because she didn’t want to risk getting caught in a potential snowstorm. That meant she was stuck at home when We Energies asked customers to lower their thermostats to around 60 degrees amid roaring winds and freezing cold on Dec. 23.

"I'd rather have 60-degree heat than no heat," Bresser said, who already keeps her home at 62 degrees to keep energy bills down. "I guess there were pipeline issues. I don’t know. I'm always leery of when a huge company puts the onus of the problem on the customer instead of taking responsibility."

We Energies made the request of customers after one of its suppliers, the Guardian pipeline, experienced an equipment failure. That resulted in a shortage of 30 percent of the gas promised to the utility. We Energies secured extra gas, and customers helped stabilize the system by conserving energy. The utility lifted its request the next day, and no customers lost heat.

"In the end, we were able to kind of keep everything up and running and avoid any kind of worst case scenarios," We Energies spokesperson Brendan Conway said.

The stretch of extreme cold reduced natural gas output nationwide as wells and pipes froze, according to Bloomberg. That prompted utilities from Texas to New York City to make similar conservation requests of customers to protect supply.

It's important customers heed a utility’s calls for conservation when there’s an outage or shortage, according to Line Roald, an assistant professor of electrical engineering at the University of Wisconsin-Madison. Roald said the natural gas system relies on maintaining enough pressure or gas within pipelines to avoid air leaking into them, which can lead to explosions. Pressure in pipes may drop if there’s not enough supply and people continue to use gas, increasing concern over the system’s ability to operate safely.

"The utilities do their utmost best to avoid this. But, in a very extreme scenario where if people don't heed those warnings, and they are not able to actually get people to conserve, we could essentially lose gas supply," Roald said. "And then it can take a long time to restore."

Utilities are facing mounting concerns over reliability as extreme weather has threatened natural gas supplies and the power grid. As cold constrained natural gas supplies, utilities across the country also struggled to provide enough power around the Christmas holiday, resulting in rolling blackouts for some customers in Tennessee and the Carolinas.

Prior to the cold stretch, the North American Electric Reliability Corporation released an assessment in November that warned the North American grid is at risk of insufficient energy supplies during severe winter weather. It urged utilities to secure fuel supplies and weatherize natural gas facilities.

"It's clear that the extreme weather is happening, and it's clear that industry experts have sounded an alarm, if you will, that the whole industry needs to be more prepared," Tom Content, executive director of Wisconsin’s Citizens Utility Board, said. 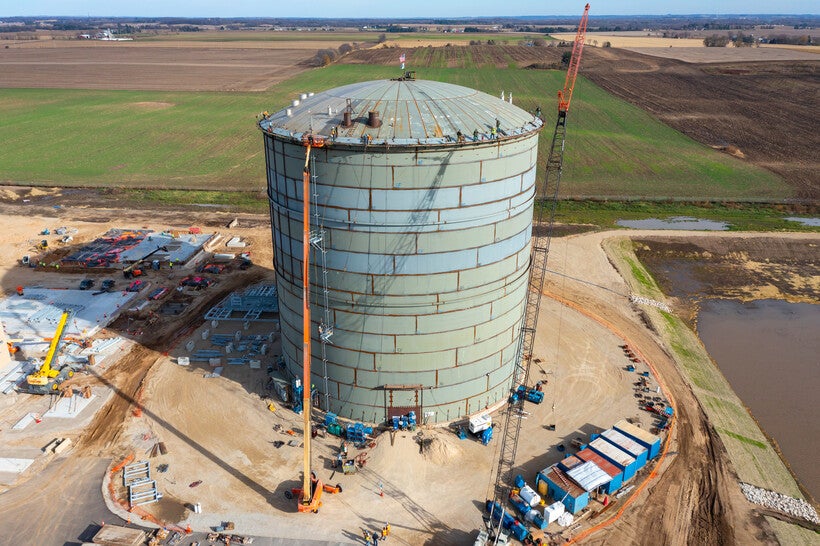 We Energies is constructing natural gas storage plants in Jefferson and Walworth counties, including its Bluff Creek facility in the town of LaGrange. The utility made a call for customers to conserve natural gas in December due to extreme cold and an outage that led to a shortage of gas from one of its suppliers.
Photo courtesy of We Energies

Utilities in Wisconsin already take steps to weatherize facilities, and plants are designed for colder weather. Even so, We Energies said it’s been taking steps to strengthen reliability and supply during times of peak winter demand in southeastern Wisconsin. The utility’s recent rate increase was tied in part to investments in natural gas plants and liquid natural gas storage. In 2021, Wisconsin utility regulators approved its planned $409 million natural gas storage project in Jefferson and Walworth counties. The utility estimates that storage would have saved customers around $100 million when natural gas prices spiked two years ago this February.

"It's not that we were caught unprepared. We've been planning, we've been building. Both of those should be online either this year or next year," Conway of We Energies said. "And actually had those been online, we wouldn't have had to make the public appeal that we did."

Even so, extreme cold threatens to affect power supplies in the Midwest as the regional grid operator’s reserves have dropped 7.6 percent due to the retirement of more than 4.2 gigawatts of nuclear and coal plants since last winter.

In the Midwest, the Midcontinent Independent System Operator manages energy and reliability of the grid for 15 states, including Wisconsin. While it expects to maintain reliable power, higher than normal energy demand combined with outages could result in steps to reduce the load on the system, transferring power from elsewhere, or energy emergency alerts.

The problems facing We Energies and utilities nationwide highlight the pressure that extreme weather and the clean energy transition are placing on energy supplies. UW-Madison’s Roald noted the shift to renewable energy can make it challenging for the grid to operate since power from wind and solar aren’t always available. Many utilities turn to natural gas as a backup fuel to provide power when the wind isn’t blowing and the sun isn’t shining.

Two years ago, Texas experienced heavy demand for both electricity and natural gas during winter storm Uri. Natural gas supply disruptions led to power outages that left millions without electricity and 246 people died due to the storm.

"If you're facing a situation where we have very cold weather, and we need natural gas both for heating and for electricity supply, then that can cause a big strain on the natural gas system, as well," Roald said. "And so understanding those interdependencies between natural gas and electricity is kind of part of the puzzle when it comes to successfully managing the energy transition and keeping people safe throughout that time."

Wisconsin’s largest utilities have proposed billions in renewable projects as they seek to eliminate carbon emissions in their operations to combat climate change. However, they’re struggling to add solar power into the grid due in part to lingering supply chain issues tied to the COVID-19 pandemic. Supply chain constraints and tight energy supplies prompted We Energies and Alliant Energy to delay retirement of coal plants last year.

Chelsea Chandler, climate, energy and air program director for Clean Wisconsin, said utilities should do more to promote energy efficiency programs as one way to place less strain on their systems and avoid outages. She said they can also pair battery storage with solar systems to call on energy when needed, which We Energies and other utilities have proposed with the Paris and Darien solar projects.

"If we're concerned about extreme weather and the grid, fossil fuels are driving climate change, and climate change is driving extreme weather. And we're at the risk of this kind of circular feedback loop," Chandler said. "We just can't be touting fossil fuels as a solution when really they are what has got us into this problem in the first place."

Temperatures Thursday are expected to drop to below negative 10 degrees in the western region of Wisconsin, while the east will see temperatures hover around zero. Wind gusts could reach 50 mph on Friday.