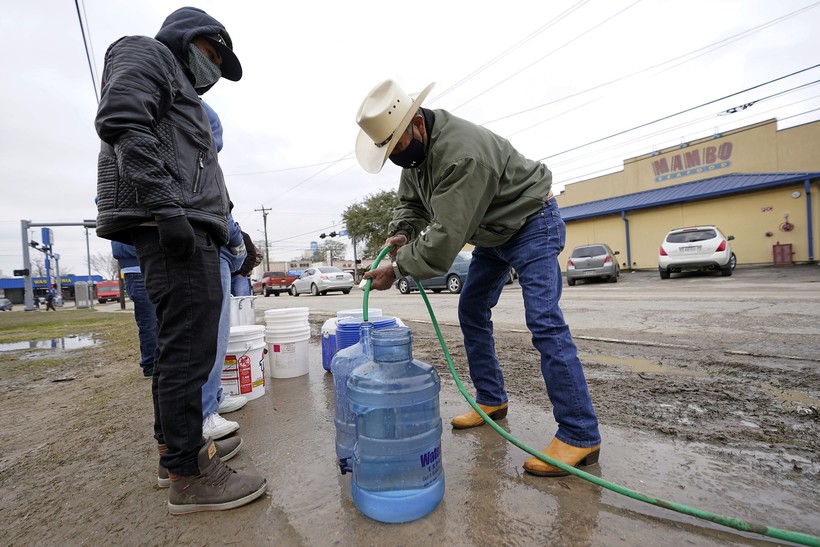 Leovardo Perez, right, fills a water jug using a hose from a public park water spigot Thursday, Feb. 18, 2021, in Houston. Houston and several surrounding cities are under a boil water notice as many residents are still without running water in their homes. David J. Phillip/AP Photo

Experts Say Cold Is Unlikely To Cause Power Crisis In Wisconsin, But There Are Still Lessons From Texas

More than half a million Americans from Oregon to Virginia dealt with power outages Thursday as winter storms continued in parts of the country.

Earlier this week, Texas was hit particularly hard. Frigid temperatures caused demand for electricity to skyrocket, while also preventing the state — which is on its own electrical grid — from generating enough power. Homes have been without electricity, and burst pipes and low water pressure have caused their own problems.

Lindsey Gould moved from Janesville for Rockport, Texas, in 2019, where she lives with her fiance, a native of La Crosse. The couple stayed with friends while the power was out at their house. Gould, an emergency room nurse, said homes in Texas aren’t built to withstand the cold she grew up with.

"People are coming in hypothermic. They're coming in with carbon monoxide poisoning, desperate to keep themselves and their kids warm," she said.

In Rockport, which is three hours south of Houston, temperatures dipped well below freezing on Monday and Tuesday. On Wednesday, it was difficult to get gasoline, and food was scarce at the local grocery store. Fortunately, temperatures there are on the rise.

Demand for natural gas has increased amid the cold weather, but Alliant Energy expects its supply to meet the needs of its customers in Wisconsin and Iowa, said Director of Operations Matt Cole. The utility also provides energy through wind, solar and coal.

"This broad portfolio is purposeful and ensures that we’ve got a diversified approach. What that means is greater resiliency and reliability for our customers every single day," Cole said.

Power plants in the Midwest are designed for cold weather, he noted. Facilities are insulated and enclosed, all outdoor piping has its own heating element and every year Alliant goes through a winter checklist to make sure it's ready for cold temperatures, Cole said.

Madison Gas and Electric Co. builds its equipment and infrastructure to withstand multiple days of 40-below weather, a spokesperson said.

Still, severe weather can impact Wisconsin utilities. It occurs most commonly when a branch falls on a power line or an icy road sends a driver into a utility pole, Cullen said. Customers should always report outages, he said.

"Reporting outages to us is really key because it's that first step in the process of us being able to send a crew out to the area, make the area safe if that's needed, and then begin those repairs and restore service," he explained.

Demand for electricity goes up when temperatures drop, said Dr. Line Roald, an assistant professor of engineering at the University of Wisconsin-Madison. The surprising part of what happened in Texas was that so many generators — from nuclear and natural gas plants to wind turbines — stopped producing energy due to the freezing temperatures, she said. 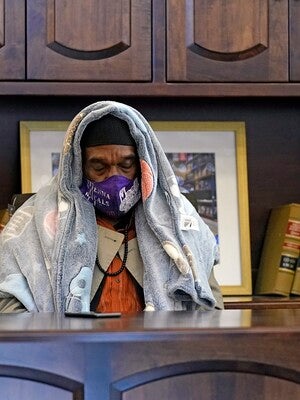 Michael Singletary rests behind a desk at a Gallery Furniture store which opened as a shelter for those without power Wednesday, Feb. 17, 2021, in Houston. Millions in Texas still had no power after a historic snowfall and single-digit temperatures created a surge of demand for electricity to warm up homes unaccustomed to such extreme lows, buckling the state's power grid and causing widespread blackouts. David J. Phillip/AP Photo

In colder parts of the country, it’s easier to plan for high demand in winter, though northern states aren’t immune to natural gas shortages, Roald said. It’s also practical to invest in the type of infrastructure that allows generators to continue producing energy on frigid days.

In the South, where air conditioning is a must in summer and temperatures rarely drop so low, those expensive upgrades are harder to justify, she said. In fact, power plants may even schedule maintenance for the winter months.

What took place in Texas was a "low-probability, high-impact" event, Roald explained.

"Probably, this type of event wouldn’t be too bad in Wisconsin," she said. "We already know we can live normally with colder temperatures, but the question here becomes what are those scenarios that we need to plan for that maybe we haven’t thought about."

It can be a tough trade off, where success goes unnoticed, but failure makes headlines. Roald said had Texas power plants been built to withstand extreme cold, they probably wouldn’t be in the news.

"All we would have heard is that it’s really cold in Texas," Roald said.