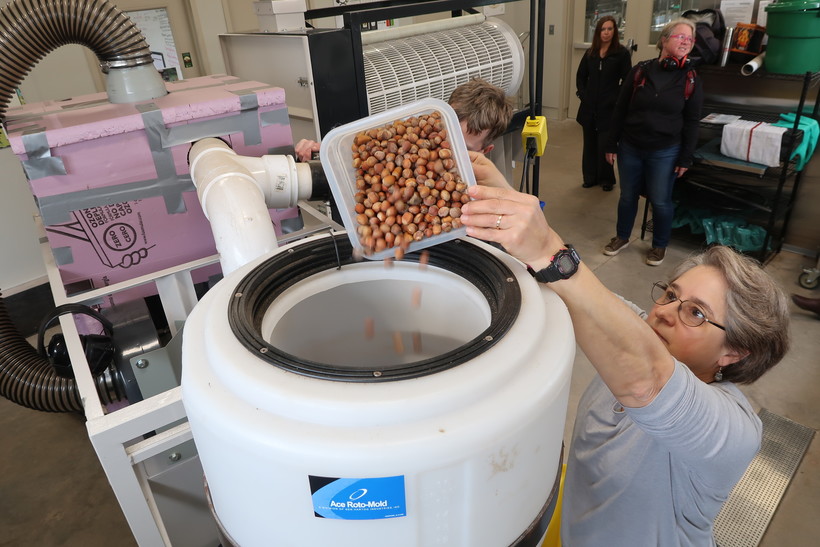 Ariadna Chediack, with the University of Wisconsin-Extension, pours hazelnuts into a machine to process them at Northland College. Danielle Kaeding/WPR

Some nuts might be tough to crack, but Ariadna Chediack has the right tools at her disposal.

Chediack, an agricultural research assistant with the University of Wisconsin-Extension, pours a container full of hazelnuts into a machine called "the cracker." The nuts fall through a funnel from above down to a drill Chediack uses to crack the hazelnut shells. From there, pieces of the shell and the kernels fall onto a vibrating metal tray. Then, the kernels drop into a large plastic container while remnants of the shell are sucked away into an aspirator.

The nuts are being processed at the Northland College Hulings Rice Food Center in Ashland.

Chediack said the work is part of a larger effort to create a sustainable hazelnut industry from the American hazelnut, which grows wild in northern Wisconsin.

"The European hazelnut doesn't grow here. It's not resistant to the harsh cold we have here, and the native ones, they are," she said. "So we are developing hybrids to see which ones are better."

The European hazelnut is one of the most widely used for commercial nut production and is found in countries like Turkey, which grows around 70 percent of the world's supply. Demand for hazelnuts has been increasing across the globe due in part to brands like Nutella and its sugary chocolate spread. Production is also rising in the United States in Oregon, which produces the vast majority of the nation's hazelnuts.

UW-Extension agriculture agent Jason Fischbach said he thinks Wisconsin and the Upper Midwest could tap into the $34 billion hazelnut market. 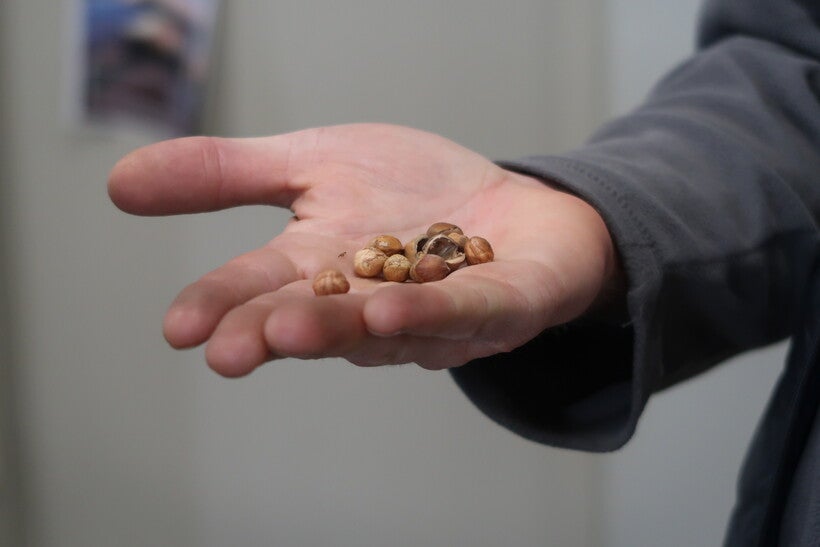 Jason Fischbach, with the University of Wisconsin-Extension, holds a handful of hazelnut kernels. Danielle Kaeding/WPR

"We have no nut economy in Wisconsin and that includes the production and value-added processing," said Fischbach. "It's big business and we don't participate and yet, we have this wild plant that grows throughout northern Wisconsin, (the) American hazelnut."

Fischbach co-leads the Upper Midwest Hazelnut Development Initiative, which was formed by the University of Wisconsin and University of Minnesota in 2007. The initiative has been working with around 150 growers in Wisconsin, Minnesota and Iowa to identify the best hazelnut seedlings for commercial production. Now, they're cloning those seedlings, which will start going out to growers next spring.

Todd Rothe, who manages the food center at Northland College, said hazelnuts are just one crop that could be grown locally in northern Wisconsin to benefit the region.

"If we can identify at least one hazelnut product that can be processed, packaged and distributed from our area that’s going to create jobs, keep dollars circulating locally, help build our local economy here," Rothe said.

As part of that, Fischbach approached Northland business instructor Jennifer Kuklinski about developing ideas for product development. Last year, Kuklinski's class of around 20 students worked in the food center to come up with hazelnut products ranging from cookie dough to ice cream to a hazelnut spread. They then brought those products before the campus community for a taste test.

The Gays Mills-based American Hazelnut Co., owned by about 20 growers, has been working with the initiative to process and market hazelnuts across the Upper Midwest. Brad Niemcek, the company's general manager, said they purchase nuts from their growers and Oregon for processing at Northland College. The kernels are then sent back to the company.

"Which we will market either as kernels or we will make them into oil and a flour, which is a byproduct of the oil pressed by the process," said Niemcek.

Niemcek said around 40 stores and restaurants in the Midwest carry their products.

Fischbach envisions the American hazelnut could follow in the footsteps of another Wisconsin native: cranberries. The state grows more than 60 percent of the nation's cranberry supply. 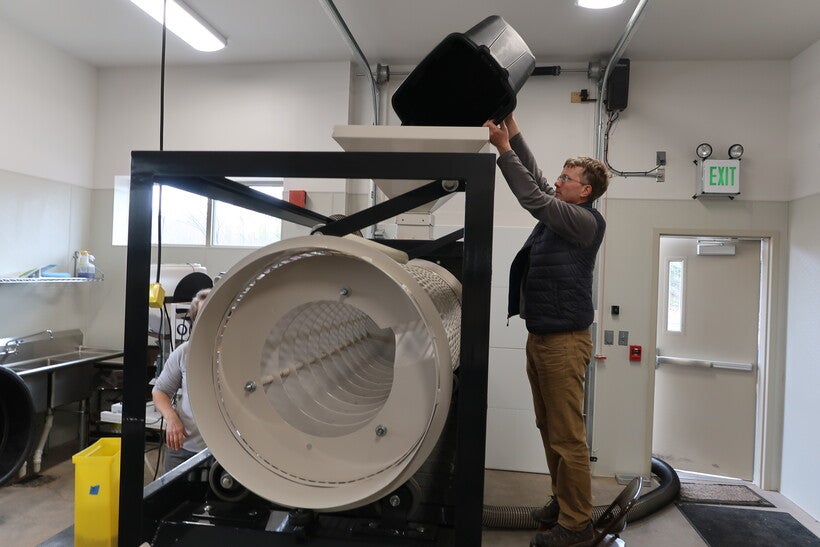 Jason Fischbach, of the University of Wisconsin-Extension, pours hazelnut kernels into a sizer to separate out differing sizes of the kernels. Danielle Kaeding/WPR

"The cookie dough ended up being sort of the most popular. It was actually very good," said Kuklinski. "The students wanted to actually just market the cookie dough, but they ended up baking cookies for the taste testing and they had a lot of positive feedback."

However, hazelnuts take time to grow with no harvest expected until four years after planting. Fischbach said growers aren't expected to break even until after eight years, but he said the upfront costs are similar to fruit crops like apples and blueberries.

Don Wyse, a professor of agronomy and plant genetics at the University of Minnesota, argued hazelnuts have potential to become a major oil and protein crop for the Upper Midwest. Wyse, who is part of the initiative, said farmers can still earn money off the land while the hazelnut trees mature.

"They can be grown in an alley cropping system where you can farm between the rows," said Wyse.

"It's a very good economic opportunity crop, as well as a crop that produces a high level of ecosystem services," he said. 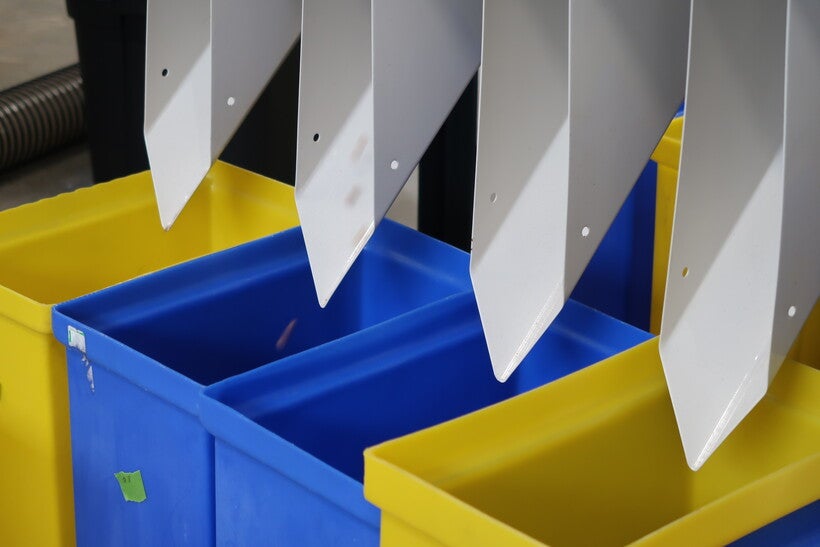 Hazelnut kernels are separated out according to size. Danielle Kaeding/WPR

Niemcek said hazelnuts are one way for farmers to diversify their crops, but he acknowledges it might be a tough sell for those who traditionally grow corn and soybeans.

"But gradually, we're seeing more and more people getting interested in just that kind of phenomenon because it's earth-friendly," he said.

Those involved with the Upper Midwest Hazelnut Development Initiative tout the nut as a crop that has potential to battle the effects of climate change. Fischbach said perennial woody crops like hazelnuts in northern Wisconsin, which has seen three massive floods in the last seven years, could help slow down the flow of runoff during heavy rains and reduce peak flows.

"Every part of the Upper Midwest has their own water quality concerns and hazelnuts fit well into meeting those concerns," said Fischbach.

However, Wyse noted they're still probably about a decade away from large plantings of 50 acres or more. He added hazelnuts or any other crop won’t provide a silver bullet to the environmental challenges or water quality issues that can coincide with agriculture.

Wyse said hazelnuts is one of 13 crops that are being developed through the university's Forever Green Initiative that is designed to create new economic opportunities for farms while enhancing ecosystem services. Other crops include Kernza, an intermediate wheatgrass. Wyse said it's the first perennial grain to be developed in the world.

Other researchers, like horticulture professor Jed Colquhoun with UW-Madison, said they're beginning to explore a variety of native plants, fruits and crops grown in other parts of the world that could hold potential for Wisconsin farmers. He said that includes the Bambara groundnut, which originates in West Africa.

"Unfortunately, we find ourselves not only in the corn, soy, dairy world, but even in the specialty fruit and vegetable crops in an oversupply situation in many cases," said Colquhoun. "What we're really trying to do is figure out what our climate, soils and unique production characteristics can do to give us a niche in agriculture that can’t be replicated as easily elsewhere."

Fischbach thinks hazelnuts will be part of the mix. He said production costs in Wisconsin are lower than Oregon. Plus, he thinks the flavor of native hazelnuts may favor the region.

"When people eat a fresh-harvested, fresh-roasted hazelnut, their eyes explode they're just so excited," said Fischbach. "I mean they just taste amazing."