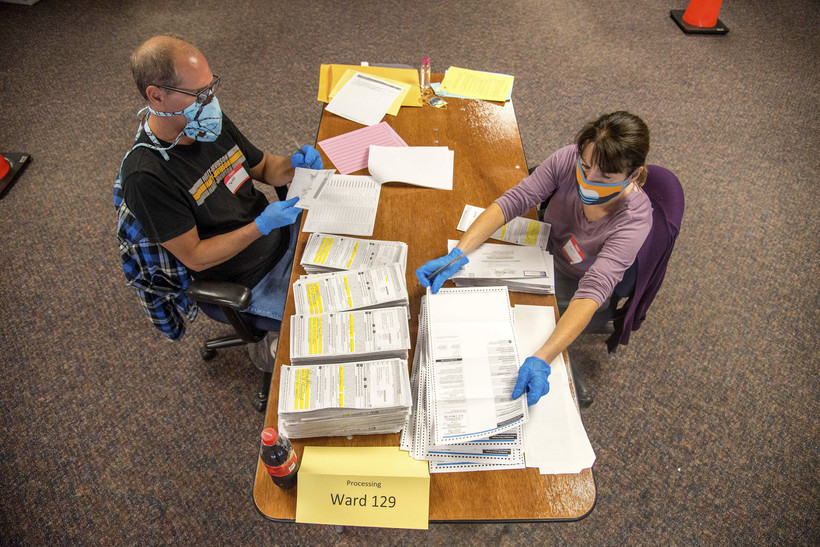 The Wisconsin Supreme Court has rejected an effort by Green Party presidential candidate Howie Hawkins to get on the state's November ballot, clearing the way for clerks to begin mailing more than a million ballots to voters.

Conservative Justice Brian Hagedorn joined the court's three liberals in ruling against Hawkins, writing that his campaign had waited too long to file its lawsuit.

"For this court to order the printing and mailing of replacement ballots containing the petitioners' names would create a substantial possibility of confusion among voters who had already received, and possibly returned, the original ballots," read the majority opinion. "Under the circumstances presented here, it would be unfair both to Wisconsin voters and to the other candidates on the general election ballot to interfere in an election that, for all intents and purposes, has already begun."

The court also lifted its order barring clerks from mailing ballots, meaning those mailings can move forward. The court ordered clerks to stop mailing ballots last week while it considered the case.

"It is ultimate voter suppression when a candidate who presumptively belongs on the ballot is denied ballot access," wrote Ziegler. "Instead of acting swiftly, the court ducks behind its self-created 'it is too late' timeline to preclude a party from ballot access and to prevent voters from choosing the candidate they believe is best qualified."

Hawkins' lawsuit was being watched closely because of Wisconsin's potentially pivotal role in the 2020 election and the prospect that a Green Party candidacy could pull votes from Democratic nominee Joe Biden.

Hawkins' case received renewed attention last week when it appeared that the state Supreme Court might delay the mailing of more than a million absentee ballots and force at least 2.3 million ballots to be reprinted.

Shortly after Monday's ruling, some clerks had already resumed the process of mailing ballots.

"We are in the process of putting ballots in mailing envelopes so we can take them to the mail room first thing in the morning," said Madison City Clerk Maribeth Witzel-Behl said in an email.

Jeff Mandell, the Democratic attorney who led the effort to challenge Hawkins' petitions, called the decision a victory for the rule of law.

"This ruling allows the election to proceed in an orderly, lawful efficient fashion that all voters — in Wisconsin and beyond — can have confidence in," Mandell wrote.

But speaking by phone after the ruling was handed down Monday night, Hawkins struck a different note.

"It's clear we got screwed," Hawkins said.

While the court's majority opinion was critical of the Hawkins campaign for not filing its lawsuit sooner, Hawkins said the campaign did what it could.

"We couldn't find a damn lawyer," Hawkins said. "You know, we went to the usual progressive lawyers and they wouldn't return our calls. So then we had to get on Google and find election lawyers."

"They took the case," Hawkins said. "Where were the progressive lawyers to defend our right to be on the ballot?

Hawkins said the Green Party would launch a write-in campaign.

Monday's Supreme Court ruling did not address a separate effort to get on Wisconsin's ballot by rapper Kanye West, although the decision could potentially shut the door on West's name appearing.

West made last-minute bid to get on Wisconsin's ballot with the help of Republican lawyers, but a Brown County judge ruled late Friday the campaign had missed the deadline for filing nomination papers.

West's campaign could appeal the ruling, although the Supreme Court's decision in the Hawkins case suggested a majority of the court felt that the time for such lawsuits had passed.

"The court today explained that we're simply too far into the election already," Mandell said. "If it's too late for one it should be too late for the other."

Both the West and Hawkins lawsuits stemmed from decisions last month by the six-member bipartisan Wisconsin Elections Commission.

The commission voted 5-1 to reject West's nominating petitions, but commissioners split 3-3 when it came to Hawkins, with Democrats voting to keep him off the ballot and Republicans voting in his favor.

At issue were hundreds of petitions that listed different addresses for Angela Walker, Hawkins' running mate. After the petitions were challenged, the Hawkins campaign did not file a formal response.

Justices who dissented Monday argued that the Elections Commission had a duty under state law to presume that the petitions listed accurate addresses, but the majority opinion did not address that point, focusing instead on the timing of the case.

Monday's ruling was at least the third high-profile case where Hagedorn split from his conservative colleagues on the court.

Karofsky's win trimmed the court's 5-2 conservative majority to 4-3, meaning conservatives can have their way on the court, but only if all four of them stick together.