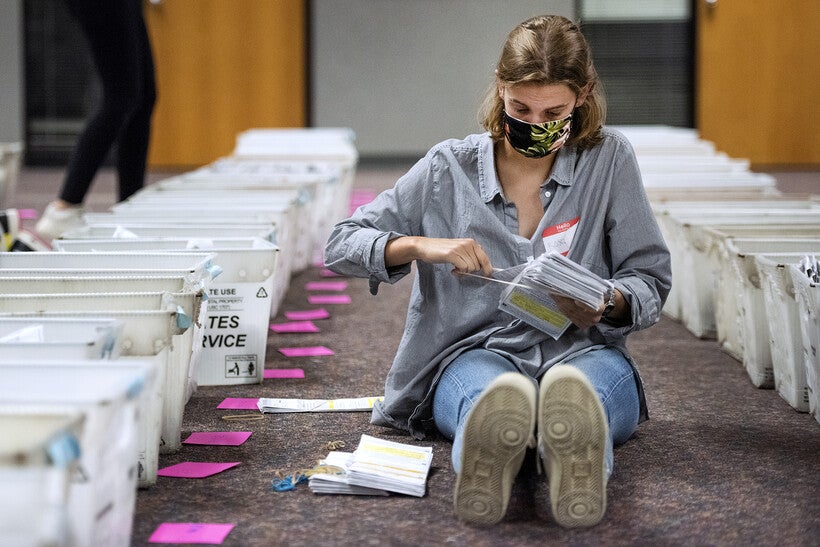 Roxanne Drewry puts a rubber band around a stack of absentee ballots in envelopes after she ensures they’re in the correct order Tuesday, Aug. 11, 2020, in Milwaukee. Angela Major/WPR

Green Party Effort To Get On State's Presidential Ballot Could Force Millions Of Ballots To Be Reprinted
By Shawn Johnson
Share: 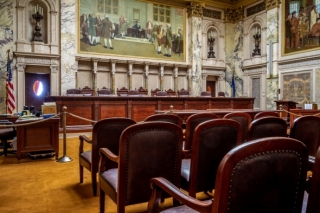 Conservatives on the Wisconsin Supreme Court issued an order Thursday that will keep clerks from mailing absentee ballots to voters while justices consider a lawsuit by the Green Party's presidential ticket.

The move could set up a last-minute change to ballots with state and federal deadlines closing in, prompting warnings from county clerks across the state. According to documents filed with the court on Thursday night, at least 2.3 million ballots have already been printed.

Rapper Kanye West, who is running for president as an independent candidate, filed a separate lawsuit in Brown County Circuit Court after the Elections Commission kept him off the ballot. A decision in that case could come any day.

The Elections Commission had warned previously that clerks were already printing ballots in an effort to meet the deadlines, but on Thursday, justices said they wanted to know more.

"We conclude that the respondent Commission should be required to provide the court definite factual information about whether and when absentee ballots have, in fact, been printed, requested, and mailed," wrote the court's 4-3 conservative majority in an unsigned order.

In a sworn affidavit filed with the court just hours later, Elections Commission Administrator Meagan Wolfe said she had no personal knowledge of whether any ballots had been mailed, but she cautioned that the state's information was limited because of the tight deadline imposed by the court and the fact that most municipal clerks are part-time employees.

According to a state database shared with the court by the Elections Commission, as many as 378,482 ballots had already been "sent" to voters, but that list included 77,035 in the city of Madison. Maribeth Wietzel-Biehl, Madison city clerk, said in an interview that her office had received and sorted its absentee ballots, but it hadn't yet mailed them to voters as of the state Supreme Court's order Thursday.

"We have printed over 77,000 labels, so far," Wietzel-Biehl said. "We'll just be on the edges of our seats waiting to see if we can get these ballots in the mail."

'It's Potentially A Huge Disaster'

County clerks said a last-minute move by the court to add the Green Party to the presidential ballot would almost certainly cause them to miss state and federal deadlines for mailing ballots and could undermine the integrity of the election.

"It's a potentially a huge disaster for Dane County," said Dane County Clerk Scott McDonell in an interview.

Clerks from around the state also shared their concerns in a document filed with the court, saying a ruling by justices now would stress their budgets and upend a process that has been in the works for weeks.

"I hate the words fair and unfair but I find it unfair that County Clerks were/are put in this position of trying to make decisions when the courts are not acting expeditiously," wrote Chippewa County Clerk Jaclyn Sadler. "This should not be happening the week before ballots are to be mailed out."

"It will be difficult for counties to absorb the cost to reprint," wrote Douglas County Clerk Susan Sandvick. "It may not be possible to meet the mailing deadlines. Plus much voter confusion if some have mailed out ballots. We are too far in the process for this to occur."

"Making clerks reprint ballots would put us in the position to fail," wrote Kewaunee County Clerk Jamie Annoye. "Not to mention would cost a ton of money to have ballots reprinted & reproofed."

McDonell said the Green Party had a right to contest the Elections Commission's vote that kept it from the ballot, but he said the party should have acted more quickly, and so should the court. The Elections Commission ruled against Hawkins and Walker on Aug. 20, but the campaign didn't file a petition with the state Supreme Court until Sept. 3.

"If they had stepped in and made a decision last week or least four or five days ago, I think we could try to manage it," McDonell said. "But by acting as if time stands still, they're really jeopardizing the integrity of this election."

Staff at the Elections Commission recommended keeping the Green Party off the ballot after hundreds of petitions were turned in listing an old address for Walker, and the Green Party missed a deadline to address the discrepancy.

The six-member Elections Commission split 3-3 on whether to allow Hawkins and Walker on the ballot, with all Republican members in favor and all Democrats opposed. The tie vote kept them off Wisconsin's ballot and teed up their lawsuit.

Third-party candidates are being watched closely in Wisconsin, which is considered one of only a handful of toss-up states in the presidential election.

The Green Party's Jill Stein captured 31,000 votes in Wisconsin four years ago as President Donald Trump won the state by just 23,000 votes on his way to the White House.

Republicans have taken a particular interest in helping West get on the ballot in Wisconsin and other states. West, who has supported Trump, has said that his candidacy could pull Black votes from Democrat Joe Biden.