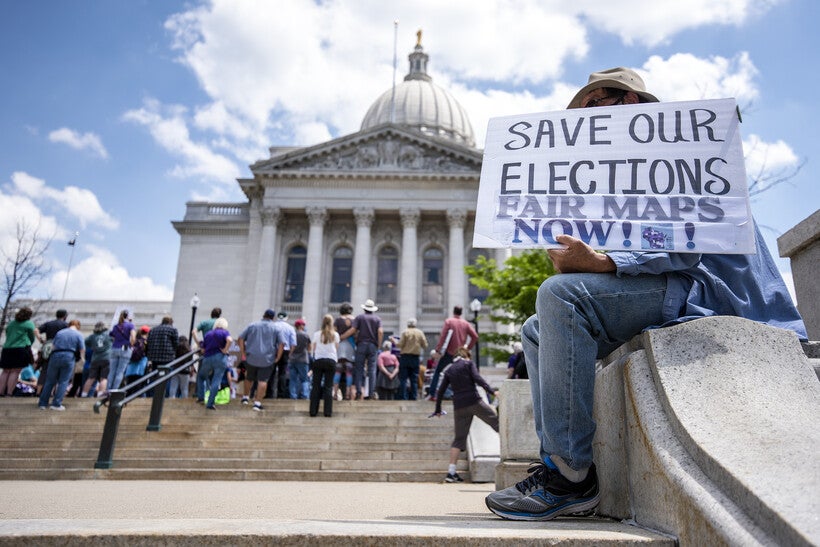 Conservative justices said they would favor a 'least changes' approach to the map Republicans drew in 2011
By Shawn Johnson
Share:

The Wisconsin Supreme Court’s conservative majority has said it favors a "least changes" redistricting plan, but precisely what that means could be in the eye of the beholder.

Justices will hold a lengthy hearing Wednesday on several redistricting proposals that could form the state’s political district lines for the next decade. It will be the first time the state Supreme Court has drawn a map since 1964.

With Democratic Gov. Tony Evers and the Republican Legislature unable to agree on a new map, Democrats had hoped a federal court would handle redistricting this cycle. But in November, the Wisconsin Supreme Court handed Republicans a major win, ruling that they would endorse new maps based in part on how closely they adhere the ones Republicans drew in 2011.

"The Supreme Court's decision that the new maps must closely match those old maps just means that the gerrymander drawn in 2011 will continue into the next decade," said Marquette University redistricting expert John Johnson.

That said, the proposed maps justices are weighing are far from identical. Johnson analyzed all of the proposals before the court based on different metrics justices might consider.

Several people and groups have submitted redistricting plans to the court, including Gov. Evers, the Legislature and Democratic Senate Minority Leader Janet Bewley. Others submitting maps include a group of plaintiffs led by Black Leaders Organizing for Communities, or BLOC, and another group led by Lisa Hunter, the lead Democratic plaintiff in the first federal redistricting lawsuit. Wisconsin’s Republican congressional delegation has also proposed maps.

When looking exclusively at which plan moves the fewest people from one Assembly district to another, Johnson said the map submitted by Evers comes out on top.

"I was surprised to learn that the Evers map actually succeeds in changing the fewest things, sort of moving the fewest people from one district to another in the state Assembly," Johnson said. "So they have a strong argument to make that they are the map with the least change of all the ones that were presented."

Evers’ proposal is different than the one endorsed by his People’s Maps Commission. That proposal, which would have made dramatic changes to the current Republican-drawn map, was defeated in the Legislature.

Republican leaders did not adjust the map that they passed and Evers vetoed in November. While that map would change more than Evers’, Johnson said it fared the best among all the plans when it comes to the average population difference from district to district, known as population deviation. Johnson said justices may focus on that metric if they’re inclined to favor Republicans.

According to Johnson’s analysis, the plans differ substantially when it comes to how they would address the federal Voting Rights Act. Republicans and Sen. Bewley’s maps would include more Assembly districts (four) where Black voters make up a majority of the voting age population. Both BLOC and Evers would take a different approach, drawing seven districts where Black voters make up at least 40 percent of the district, giving them a chance at electing their candidate of choice.

Once justices are finished with their map, a federal court could consider a Voting Rights Act challenge from any of the parties who think the state Supreme Court got it wrong.

Should the state Supreme Court approve the map submitted by Republicans, it could give them a chance at a veto-proof supermajority in the Legislature, but all of the maps would give the GOP a huge edge over the next decade.

Johnson said that was all but decided when the court agreed to the "least changes" framework.

"The partisan implications of that are clear," Johnson said of the court's conservative justices. "They knew what they were doing."