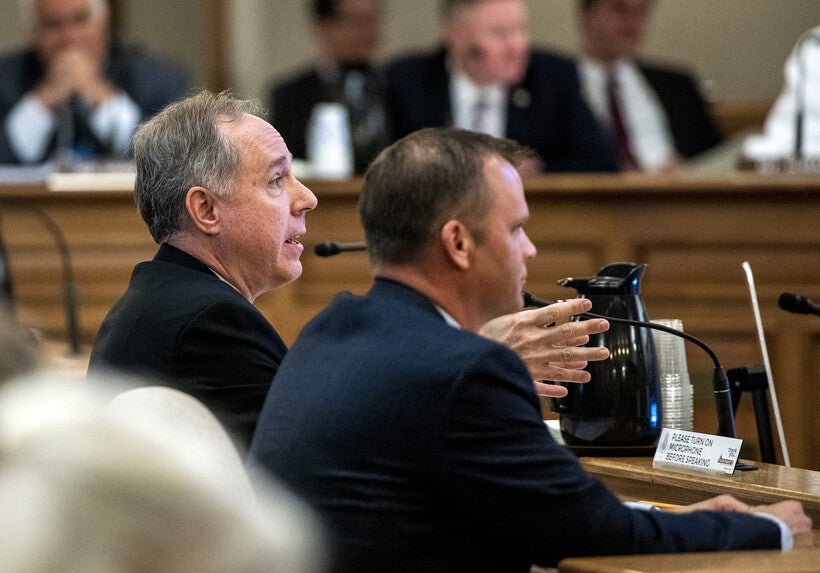 The move will set up a veto by Gov. Tony Evers that could send the matter to the courts
By Shawn Johnson
Updated:
Thursday, November 11, 2021, 5:30pm
Share:

Republicans in the Wisconsin Assembly passed their versions of new political maps Thursday, setting the stage for vetoes by Democratic Gov. Tony Evers and moving the state’s redistricting fight to the courts.

The debate also revealed sharp differences among Democrats, many of whom joined Republicans in rejecting maps drawn by a redistricting commission Evers formed.

While it's unclear what Wisconsin's final maps might look like once a legal battle is complete, the versions that passed the Assembly would cement Republican majorities in the Legislature for the next decade. GOP leaders have described their proposed legislative map as a "least changes" plan, meaning it preserves many of the features of map they drew in 2011. Experts have widely described that plan as among the most pronounced Republican gerrymanders in the country.

The Assembly also gave final passage Thursday to the latest Republican-drawn congressional map, which would make it easier for Republicans to pick up six out of eight of Wisconsin's congressional seats, up from the five they hold currently. Both maps passed the state Senate on party-line votes Monday.

Republicans said the maps they passed were legal under traditional redistricting criteria, like keeping districts compact and contiguous.

"It is the duty of the state Legislature laid out in our Wisconsin Constitution — not appointed commissions or the executive branch — to draw legislative districts," said Assembly Speaker Robin Vos, R-Rochester. "The Republican caucus took this seriously."

But Democrats accused Republicans of trying to skew the state's politics, giving themselves lopsided majorities in the Legislature despite statewide elections that are as close as they come.

"It is not normal in a 50-50 state to have 64 seats drawn to be more Republican," said Assembly Minority Leader Gordon Hintz, D-Oshkosh. "You baked in a map with an advantage. Now you're trying to make it a permanent advantage at the expense of democracy in our state."

Evers has already promised to veto the maps, calling on Republicans to instead pass the proposals drawn up by his People's Maps Commission, which are more competitive with a smaller GOP edge.

But during Thursday's Assembly debate, it was Democrats who had the harshest words for the People's Maps Commission plan, with some attacking the commission for drawing districts that dilute the voting power of Black voters.

Rep. Sylvia Ortiz-Velez, D-Milwaukee, criticized the People's Maps Commission plan at length, saying it would make it harder for Black and Latino voters to elect the candidates they want.

"I have to come to the conclusion that there's a national effort to dilute minority communities to create more Democratic seats," Ortiz-Velez said, pointing specifically to the involvement of the National Democratic Redistricting Committee run by former U.S. Attorney General Eric Holder.

Ortiz-Velez said the plan clearly violated the federal Voting Rights Act, and that her efforts to get that changed by the People's Maps Commission were ignored.

"It was all a show," Ortiz-Velez said "The people have been fooled and betrayed."

Rep. LaKeshia Myers, D-Milwaukee, echoed many of the same concerns, saying she would not support a map that she felt violated the federal Voting Rights Act.

"I'm not willing to vote for any map that dilutes and or erases African American or Latino representation," Myers said. "I don't care who wrote it."

Evers spokesperson Britt Cudaback said in a statement that the Voting Rights Act is an essential part of democracy.

Cudaback's statement also addressed concerns from some lawmakers who felt they were not given enough of a say in the People's Maps Commission process.

"The literal point of a nonpartisan redistricting commission is for the outcome not to be determined by sitting elected officials," Cudaback said.

The Assembly voted 77-21 to reject the People's Maps proposal, with 17 Democrats joining 60 Republicans to oppose the plan.

The GOP redistricting plans for the state Legislature and Congress both passed on 60-38 party-line votes, with all Republicans in favor and all Democrats opposed.

Courts likely to have the final say

Once the maps are formally sent to the governor's desk and Evers vetoes the plans, it would send the proposals to court, but it's still unclear which court will resolve the dispute.

Republicans want the matter handled in the Wisconsin Supreme Court, where conservatives hold a 4-3 majority. Democrats want it dealt with in federal court, which has a long history of resolving redistricting during times of divided government.

The three-judge federal panel hearing Wisconsin's case had initially indicated it would hold a trial in January, but has since backed off, indicating that it will yield to the Legislature, governor and state courts for now.

Federal judges could still step in and take the case if they decide the state process is moving too slowly. Candidates are scheduled to begin circulating nomination papers for next year's partisan primaries on April 15, 2022.