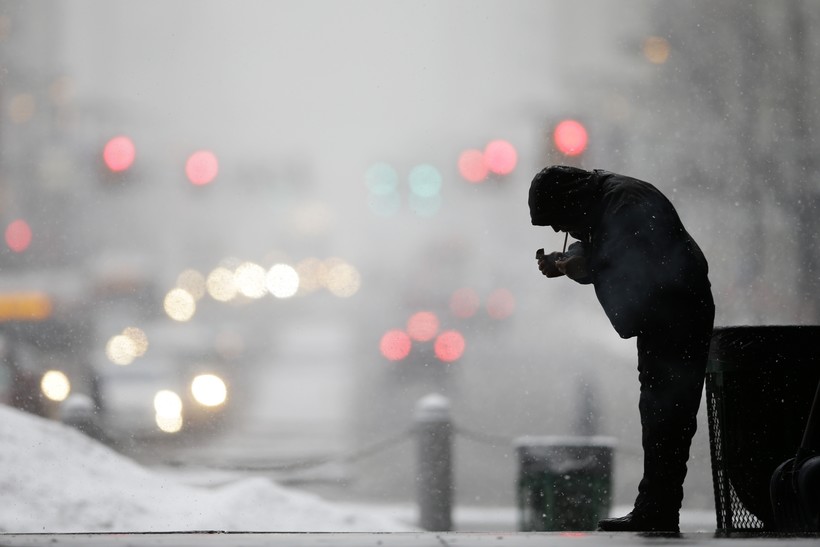 A man lights up a cigarette Thursday, March 5, 2015, during a winter storm in Philadelphia. Matt Rourke/AP Photo

Percent Of Low-Income And African-Americans Who Smoke Also Going Down But At Slower Pace
By Shamane Mills
Share:

For tobacco control advocates, their work in recent years has been like a game of whack-a-mole. Just when progress is made in one area, another issue crops up.

Fewer Wisconsin adults are smoking than ever before. The state's overall smoking rate has dropped to 16 percent, the Wisconsin Department of Health Services reports. That's higher than the national rate of 14 percent. 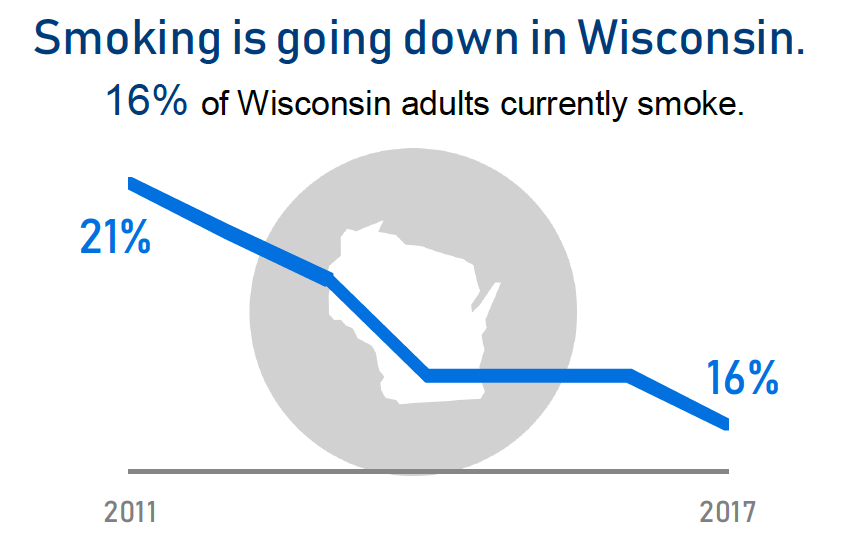 It's a trend that — despite Wisconsin's smoking rates being higher than the national average — makes Dona Wininsky, of the American Lung Association in Wisconsin, hopeful.

"While that isn’t necessarily great news for Wisconsinites, what is good news is that we're still on the downward trend. Our numbers here in Wisconsin are continuing to decline from over 30 percent, to 20 percent and lower," Wininsky said. "We were very excited when Wisconsin hit 18 percent a few years ago."

Despite the overall trends, low-income residents and African-Americans in the state continue to smoke at much higher rates. And many young people have begun to use flavored tobacco products or e-cigarettes.

"We see a very large uptick in e-cigarette use. While it isn't tobacco, it contains nicotine. It also contains flavors making it attractive to youth," Wininsky said.

Smoking among adults has been consistently high among those who earn less than $25,000 a year. Twenty-nine percent of low-income people smoke traditional cigarettes, according to DHS. That number has gone down slightly but not as quickly as smoking overall in the state. The same goes for African-Americans in Wisconsin.

But Lorraine Lathen, director of the Wisconsin Tobacco Prevention and Poverty Network, said even a small decline adds up.

"(The African-American smoking) rate had been nearly double the state average and it has actually declined a bit as well. (It) used to be at 31 percent, and it’s now at 28 percent," Lathen, who also directs the Wisconsin African American Tobacco Prevention Network, said. "These declines are small victories that add up to larger victories."

As for why people smoke, Lathen said many users cite stress as a reason for their habit. But marketing also plays a role.

"There are more tobacco retailers in low-income communities, two to three times more. And people are encountering tobacco advertising all the time," she said. "So, if you’re trying to quit and you walk into a gas station or convenience store and they’re promoting their products, those are triggers (to smoke)."

A combination of grassroots efforts and innovative partnerships are trying to bring resources into communities where there are more smokers.

One example is a new federal rule implemented in July that requires smoke-free policies in all public housing.

In Milwaukee, Lathen said they talk with residents of public housing about the health benefits of quitting smoking and provide onsite cessation clinics where pharmacists also talk about medications that can help people quit.

While there has been progress in reducing cigarette smoking in Wisconsin, there continues to be challenges in figuring out the next big product that could entice new smokers.