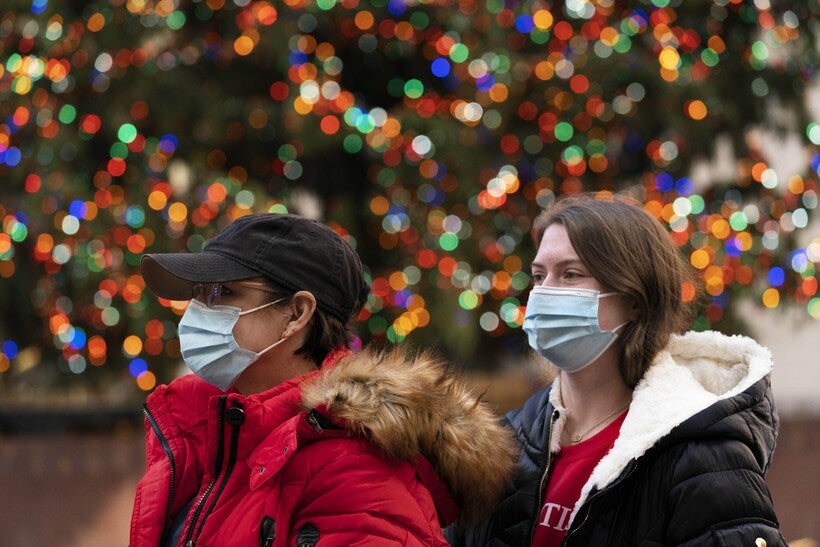 People walk by the Rockefeller Center Christmas Tree, Thursday, Dec. 3, 2020 in New York. What’s normally a chaotic, crowded tourist hotspot during the holiday season is instead a mask-mandated, time-limited, socially distanced locale due to the coronavirus pandemic. Mark Lennihan/AP Photo

Wisconsin has set a new single-day record for COVID-19 deaths.

The latest data from the state Department of Health Services reported 120 new deaths on Tuesday. The previous single-day record was 107 deaths on Dec. 1.

Of the people who got tested for COVID-19 over the past week, 26.2 percent were positive for the disease, according to DHS. That rate has been declining for several weeks.

Gov. Tony Evers and DHS Secretary Andrea Palm announced a new at-home COVID-19 testing program Tuesday. The state has contracted Vault Medical Services to send saliva collection kits to Wisconsin residents regardless of whether they have symptoms. The state will pay for the new testing service and residents can order a collection kit on the DHS website.

Palm said the at-home collection is just as accurate as a nasal swab at a clinic or community testing site.

"We are excited to continue to diversify our options and expand access to testing in Wisconsin," Palm said. "This is more important than ever. In recent weeks we've seen a decrease in the number of people seeking COVID-19 tests."

On Sept. 30, DHS also introduced an alternative positivity rate, one that measures the percentage of tests that are positive, instead of the percentage of people who get a positive result. The new metric takes into account people who have been tested multiple times. The seven-day average for that number is at 9.1 percent.

According to the Wisconsin Hospital Association, there were 1,308 COVID-19 patients hospitalized as of Monday. A total of 20,355 people have been hospitalized because of the disease, or 4.4 percent of all positive cases.

The latest figures bring the overall total of positive cases in Wisconsin to 461,015, according to DHS. A total of 4,545 people in Wisconsin have died from COVID-19.

Wisconsin's daily testing capacity — based on the availability of test supplies and adequate staffing — has grown from 120 available lab tests in early March to 59,185 as of Tuesday. The number of actual people with new test results reported Tuesday was 6,852.