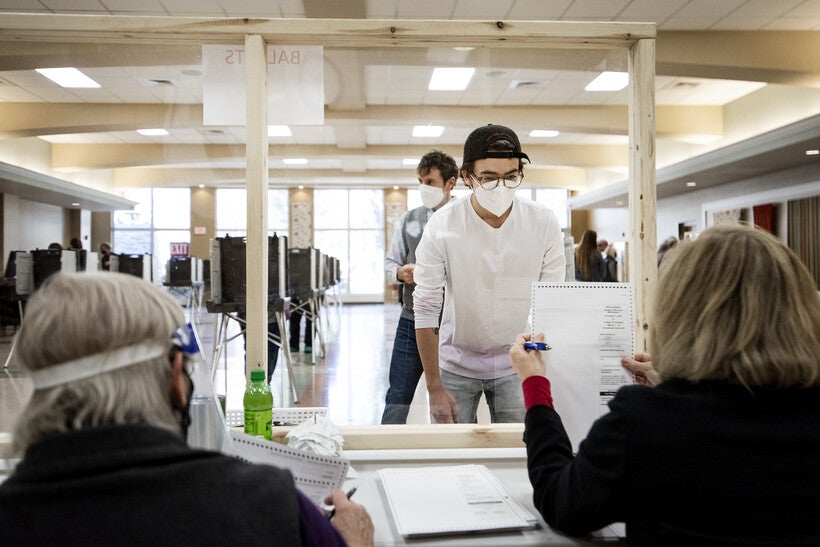 Maxx McGinnis listens to instructions on how to fill out his ballot Tuesday, Nov. 3, 2020, at St. Charles Catholic Church in Hartland. The issue of climate change motivated him to vote for the first time. Angela Major/WPR

Voters at some Wisconsin precincts experienced little to no wait Tuesday. Still, voter turnout was high across the state, thanks in large part to mail-in and early voting numbers.

In the April election, some Wisconsin residents reported waiting more than four hours to cast their ballot in the presidential primary. The long lines and concerns over the coronavirus changed how people voted in the general election.

As of Monday morning, about 1.9 million Wisconsinites already returned their absentee ballots, according to the state Elections Commission, about twice as many than were returned in 2016. The large number of absentee votes delayed election results in some areas of the state, since Wisconsin law prohibits clerks from counting ballots before Election Day.

As of 1:15 a.m. Wednesday, the Associated Press reported close to 2.9 million votes had been counted in the state's election, close to the approximately 3 million tallied in 2016. Absentee ballot returns were still being counted.

Milwaukee was one place with delayed results. Four years ago, about 250,000 city residents voted in the presidential election. More than two-thirds that number of votes were cast by absentee ballots there this year.

By midnight, Milwaukee County counted all votes cast on Election Day. City officials said more than 200,000 additional absentee ballots might not be tabulated until 4 a.m.

Compared to 2016, turnout was up this year in two of the three "WOW" counties — Waukesha, Ozaukee and Washington — which form a Republican stronghold in the Milwaukee suburbs.

While results from Milwaukee and Brown counties were slowed by the large number of absentee ballots, Dane County managed to complete its count shortly after midnight. Turnout was up significantly from 2016, when about 82 percent of residents visited the polls. This year, that number was closer to 90, according to the county clerk.

Randall Wildman voted for Democratic presidential nominee Joe Biden at Madison Public Library's Hawthorne Branch, where there was a line of about 10 people Tuesday afternoon.

"I think he’s kind of middle of the road, and I really like that," Wildman said.

In nearby Rock County, nearly 89 percent of registered voters participated in the 2020 general election, a small increase from four years ago, according to the county clerk.

About 10,000 more votes were cast in Outagamie County, part the hotly contested Fox Valley region, compared to 2016. Nearly 87 percent of registered voters there took part in this year’s general election, siding largely with Republicans, though the city of Appleton swung in favor of Biden.

"Not only do I think voting is good, but I think people my age, around the 20s area, should be voting," Cano said.

Turnout wasn’t as high in other parts of the state. The Eau Claire County clerk said about 70 percent of eligible voters participated in the general election there.