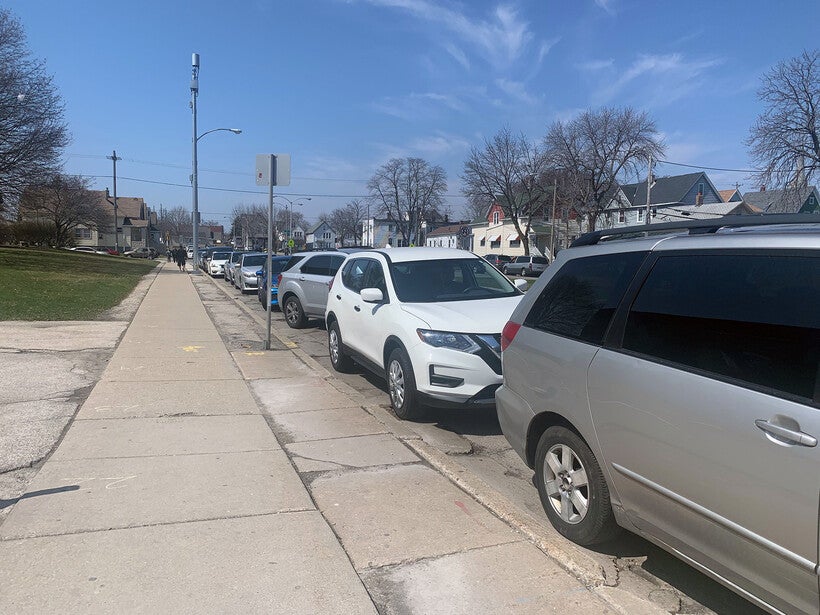 Cars line up to vote curbside on Tuesday, April 7, 2020, at South Division High School in Milwaukee. The city usually has 180 polling places, but on Tuesday, the city only had five. Alana Watson/WPR

Wisconsin Schools Had More Than $1.6B On Tuesday's Ballot, But Results Are Still A Ways Away

Referendum Results Could Come In As Late As April 23
By Madeline Fox
Share:

As of late January, when school districts were finalizing and submitting the language for 57 school funding referendums across the state, 2020 was looking like a promising year for primary election turnout in Wisconsin.

It was before the Iowa caucuses, with a still wide-open Democratic primary looking likely to drive voters to the polls. The United States had already had its first confirmed case of COVID-19, but the total number of positive tests nationwide was still in the single digits — and states had yet to impose any of the shelter-in-place mandates that have cascaded across the country over the past several weeks.

When 48 school districts were getting their referendums on the ballot the required 70 days before election day, they weren’t expecting anything like Tuesday’s election. And districts won’t know how much the global pandemic impacted results until at least next week. Election results are expected on April 13, but referendum results could come in as late as April 23.

Even for those who did make it to the polls, the pandemic has caused unexpected financial pressures that put school districts’ requests to hike property taxes into a new perspective.

"I think it opens up these questions, because I’ve taken a 25 percent pay cut," said Milwaukee resident Caleb Neiswander, who waited more than two hours at Riverside High School to cast his ballot Tuesday. "You want to help the schools, but there’s so much uncertainty right now — it’s so hard to balance those two things."

The Milwaukee Public School District asked for $87 million over three years to raise teacher pay, boost career and technical education programs and expand art, music, physical education and language programs. It's the school district's first referendum since 1993, when a $366 million measure failed. Since then, the school district has been losing more students and funding to voucher programs.

A December poll showed support for an MPS referendum, with about three out of five polled in favor — but that predated the pandemic’s effects on turnout or families' finances.

Even if referendums pass, schools could be looking at a different financial picture as a result of the coronavirus outbreak than they were planning for in January.

In the short term, Wisconsin schools’ two funding sources — state money and property taxes — are already set, with the state budget already hammered out in Madison and property tax levies already determined. Moving forward, though, school funding could take a hit as the state budget tightens in response to a dip in income and sales taxes, according to Wisconsin Policy Forum President Rob Henken.

"There's huge question marks around whether the existing levels of state aids for schools are going to be able to be sustained," he said.

Henken noted that cities could also see a spike in unpaid property tax bills, and possible foreclosures, as employers cut back on jobs and hours in response to the pandemic. That, in turn, could cut school districts’ property tax revenue.

The Tuesday ballot measures follow several good years for raising school funding caps. In 2016, voters passed about $1.7 billion for facility improvements and programming, followed by $1.3 billion in 2018 — voting "yes" for a majority of the referendums on the ballot both years.

This April's referendums included more than $1.6 billion in requests for everything from $95,000 per year for a school resource officer in the Waterford Union High School District to $16.84 million in bonds for a new school building and other upgrades in the Sturgeon Bay School District.

Some school districts, like Milwaukee, are asking to permanently raise their revenue limits. Others are angling for increases that will expire in a year, or several years.

The Racine Unified School District's referendum was both the largest and the longest lasting, asking voters to authorize up to $1.3 billion over the next 30 years for renovations, new school buildings and school closures outlined in RUSD’s long-range facilities master plan. The plan includes improvements for all district schools that aren’t set to close.

School district leaders have stressed that the $1.3 billion is a ceiling, not a floor — they have promised to try to keep the tax rate flat as they try to fund $598 million worth of projects and debt service.

Dan Rossmiller, director of government relations for the Wisconsin Association of School Boards, said RUSD does have a history of staying below its maximum levy.

"To use a cliché, it has a history of leaving money on the table," he said. Still, he notes that it’s a bold move to get out of school districts’ common cycle of coming to voters again and again with new school referendums.

RUSD’s most recent referendum, for $41.7 million in 2019, passed — but the sticker shock this time around has made some local officials wary.

Rossmiller said it's hard to judge what Tuesday's unusual election will mean for the referendums' chances of passing, as early indications show that turnout may have been lower than usual.

"I think this is a unique election, because we don't know how the pandemic affected the mix of people who showed up at the polls," he said. "And I think there's been a paucity of media coverage of the referendums — everything's been COVID-19, 24/7 — and that would be a little unusual."