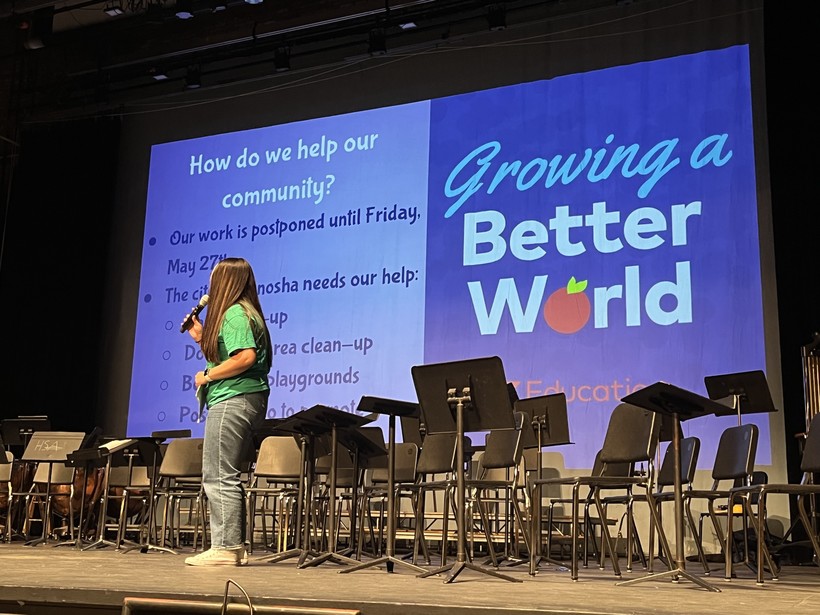 'We can use this, in the community, to make this a better place for people,' one Kenosha junior said
By Madeline Fox
Share:

Four Kenosha schools were set to spend their Friday cleaning up 10 local parks. And although rain delayed their plans, the students instead used the day to think of ways to make their worlds better.

The schools, all in the national EL Education network, were celebrating "Better World Day" by identifying service projects they could do within the community.

"Kenosha has been through a lot, so we’re in the process of repairing our community and coming back together," said Kayla Mitchell, a junior at Harborside Academy. "Maybe we can use this, in the community, to make this a better place for people, to feel more welcome and to want to come out in the community."

Harborside and three elementary schools partnered with the city to choose parks to clean up on Friday — but pouring rain kept them inside.

With their outdoor activities postponed, students from the Kenosha schools instead gathered in the auditorium at Harborside to celebrate their schools and talk about how to improve their community. They rocked out to the 2010 version of "We Are The World," — the students screamed with delight when they recognized younger versions of modern celebrities, and high schoolers turned on their phone flashlights to sway along with the music, in the style of concertgoers waving lighters. 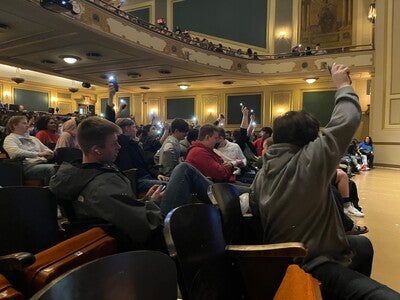 Students wave their phone flashlights as they watch a 2010 performance of "We Are The World." Madeline Fox/WPR

The park cleanup will take place at the end of May, but students on Friday were still thinking about ways to improve their corners of the world.

"I think it just comes down to really working together to solve the problems, and all being on the same page to get things done," said Suzel Gonzalez, a junior who started the school’s environmental club this year.

The environment was top of mind for several students.

"I like cleaning so I sometimes go outside and pick up garbage and stuff," said fifth-grader Dannya Sacta. "Mostly to keep the world clean so you can save lots of animals in the sea." Dannya said she’s particularly concerned about maintaining a good environment for turtles.

Kayla, from Harborside, said her vision of a better world is a more equitable and inclusive one.

"We spend most of our time between August and June ... in school for like eight hours a day, so it’s like, why shouldn’t we feel like we belong here?" she said. "We want to be comfortable here, we want to be able to express our feelings, so that’s what I’m striving for."

Wisconsin has had one of the largest Black-white student achievement gaps in the nation for years. Kayla, who is Black, said she worries about Black students being put in a box where they either struggle and are written off as part of the achievement gap statistic, or are touted as having "beaten the odds," rather than getting to succeed on their own terms.

"Sometimes I’m like, 'I don’t want to be put on display,' like 'Oh, here’s this African American student, she did it, you can, too,'" she said. "We need to shine the light on the things that our children can do, and what they’ve done so far, not what they’re lacking."