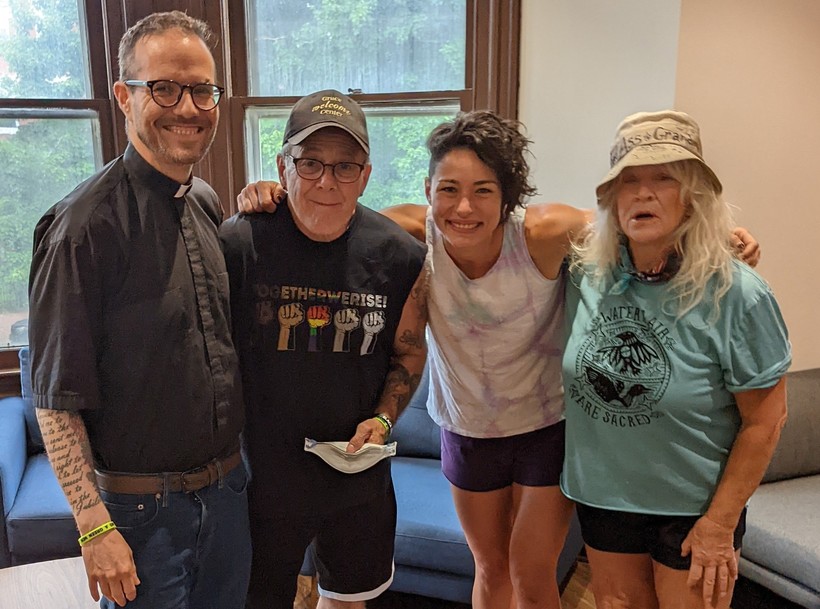 The Rev. Jonathan Barker and four members of his Kenosha Lutheran church are in Washington to rally support for climate action
By Rob Mentzer
Share:

The Rev. Jonathan Barker drove to Washington, D.C., this week fully expecting to break up the congressional baseball game.

The Kenosha pastor has made climate change activism a part of his ministry. For nearly two years, he’s been fasting two days a week as part of his climate protest. In 2020, he wrote a book called "Jesus Would Demand a Green New Deal." He and four members of the congregation he leads at Kenosha's Grace Lutheran Church traveled to the nation's capital for what they called "direct action."

"We thought it was abhorrent that they would be playing baseball while our families, while our children, while their livable future has not been solved by them taking climate action," Barker said.

Then, just hours after the group arrived, Senate Democrats announced a deal on the Inflation Reduction Act of 2022, which would provide nearly $370 billion in funding for energy and climate provisions — the single largest investment in clean energy by the federal government in U.S. history.

Barker is careful to say that the deal’s announcement is not the same as the bill’s passage. He’s fasting and praying Friday, as he has every Wednesday and Friday since the new Congress was sworn in. But like other climate activists, he says he's "beyond thrilled" at the prospect of major legislation intended to speed the transition away from fossil-fuel energy and mitigate the effects of climate change.

"It certainly isn't all of what we need," Barker said, "but this is a tremendous opportunity."

On Thursday evening, a smaller group of activists did disrupt the congressional baseball game. Barker and the members of Grace Lutheran were not among them.

The announcement of the deal came after a legislative push by President Joe Biden for a sweeping social spending bill known as Build Back Better failed last year. At $370 billion, the new bill is much smaller than the nearly $2 trillion Build Back Better proposal, and it strips out many of that bill’s social insurance provisions while focusing on policies intended to fight climate change and lower the cost of prescription drugs.

For activist Jill Ferguson, a Grace Lutheran member who is one of those traveling with Barker, the prolonged legislative debate has been infuriating.

Legislative Republicans are expected to be united in opposition to the bill. A statement from Derrick Van Orden, GOP congressional candidate in the 3rd Congressional District, said "this deceptively named bill will only make our economy worse."

Democrats say the bill will not contribute to inflation because new government spending is paid for through tax increases on corporations.

Polling shows that a majority of Wisconsin voters, including many Republicans, say fighting climate change is important. But the issue has been a victim of partisan gridlock for years.

Now, Barker and other activists say they're hopeful that the announced deal means the logjam is broken and a response to climate change through federal policy is possible. Barker said the group will stay in DC to attend a planned rally meant to keep pressure on legislators.