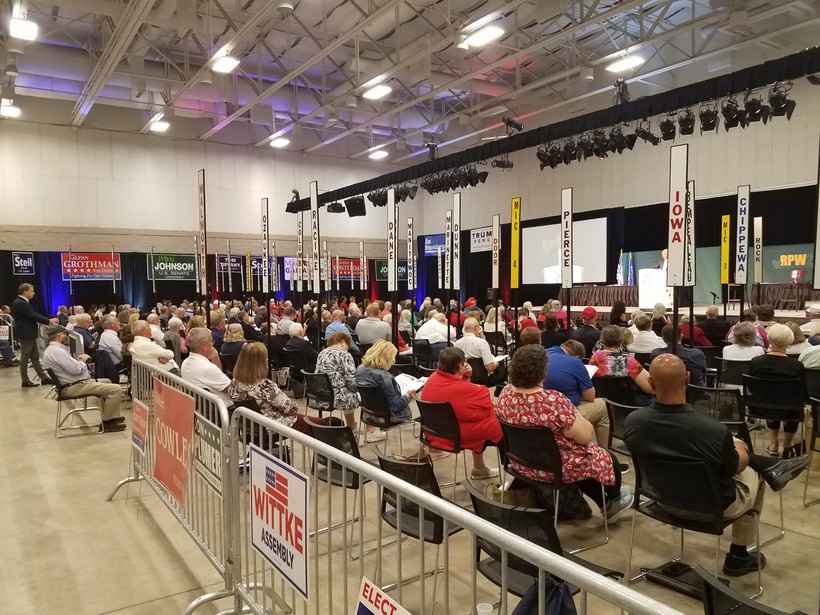 Hundreds of GOP activists gathered for the annual Republican Party of Wisconsin Convention in Green Bay, WI on July 11, 2020. While organizers offered free masks, most in the crowd declined to wear one. Will Kenneally/PBS Wisconsin

Wisconsin Republicans warned against anarchy and socialism at their annual state convention Saturday, gathering by the hundreds in Green Bay at a time when other large events have been canceled because of COVID-19.

GOP leaders who spoke at the event, which was livestreamed by the WisconsinEye public affairs network, repeatedly linked the Democratic Party to protests that have sprung up throughout the United States, warning delegates that the 2020 election represents a turning point for the country.

"We have seen violent mobs take to our streets in order to erase our history and reject our founding principles," said U.S. Rep. Mike Gallagher, R-Green Bay. "They are trying to tear things down. And so we must stand up."

Few speakers made mention of the coronavirus pandemic that has defined Donald Trump's presidency in 2020, although the state Republican Party warned people to stay home if they were feeling sick.

"As with any public activity, there are risks assumed," stated a flier handed out to conventiongoers. "By attending the RPW State Convention you acknowledge and assume any potential risk and liability for your own health."

The state GOP said 322 people attended the convention held indoors at the KI Convention Center. While the party offered free face masks to everyone, Wisconsin Public Television reported that only about a dozen attendees chose to wear one.

Mostly, Republicans talked about other issues that have dominated the news this year, including the debate over police force following the death of George Floyd in Minneapolis.

"We will not defund the police and this president will stand on the side of law and order," said Mercedes Schlapp, a senior advisor for the Trump campaign who made the trip to Wisconsin.

State Rep. John Nygren, R-Marinette, the co-chair of the Legislature's budget committee and a close ally of Assembly Speaker Robin Vos, R-Rochester, said Republican campaigns would focus on how Democrats have moved to the left in recent months.

"The protests in the streets, the destruction of the Capitol, defunding the police — I think we're going to try to contrast with how liberal and how far left Democrats have gone," Nygren said.

Nygren also raised the prospect that Republicans could elect enough new state representatives and senators to reach a two-thirds majority, which is the threshold needed to override a governor's veto. Democrats warned of that prospect at their own convention, held virtually last month.

"The veto-proof majority in both houses is within reach," Nygren said.

U.S. Rep. Tom Tiffany, R-Hazelhurst, who won a May special election for the 7th Congressional District in northern Wisconsin, devoted much of his speech to Madison, criticizing both the protests and Dane County's restrictions aimed at slowing the spread of the coronavirus.

"You go down to places like Dane County, they'd rather let the criminals out and lock down those that want to go to church," said Tiffany, who faces a likely rematch with Democrat Tricia Zunker in November.

U.S. Rep. Glenn Grothman, R-Glenbeulah, gave the most forceful defense of Trump at the convention, beginning his speech by yelling the president's name so loudly that he momentarily lapsed into a coughing fit.

"It is a disaster for this country if he loses," Grothman said. "It'll be open borders. I'm afraid we won't get it back."

Grothman praised Trump's record on renegotiating trade deals, putting work requirements on benefits like Food Share, and restricting immigration. He also criticized the Democratic Party for aligning itself with the Black Lives Matter movement, which Grothman said was Marxist.

"Marxists have always been opposed to the family," Grothman asserted. "It shows what danger we are in if we would lose."

Republican U.S. Sen. Ron Johnson did not attend the convention, saying he was on a trip his son had planned for his birthday. But in a video message, Johnson drove home some of the same warnings heard repeatedly during this year's convention.

"Many far-left activists have hijacked protests over the reprehensible death of George Floyd and turned them into dystopian displays of anarchy," Johnson said. "This is another moment of choosing. Will we descend down a path of growing lawlessness and destruction, erasing our history in a futile pursuit of a socialized utopia that history proves does not exist? Or do we come together, acknowledge our shortcomings, and work to help every citizen pursue and achieve the American dream?"

While most Republicans focused on 2020, others criticized Democratic Gov. Tony Evers, who is up for reelection in 2022.

"I don't think he wanted the job, and quite honestly, I don't believe that the governor is up to the job," said Sen. Majority Leader Scott Fitzgerald, R-Juneau, who is running for Congress.

Around the same time Fitzgerald and others were criticizing Evers, the governor's official Twitter account urged people to wear a mask when in public to stop the spread of the coronavirus.

While nothing is final, there are signs that both parties will also take different approaches at their national conventions, which draw much larger crowds from all over the country.

Democrats have already announced that the Democratic National Convention, which was originally expected to draw tens of thousands of people to Milwaukee, will be mostly virtual this year.

Republicans moved the Republican National Convention from North Carolina to Florida because of its looser coronavirus restrictions, although there are signs the event may not be as large as originally planned.