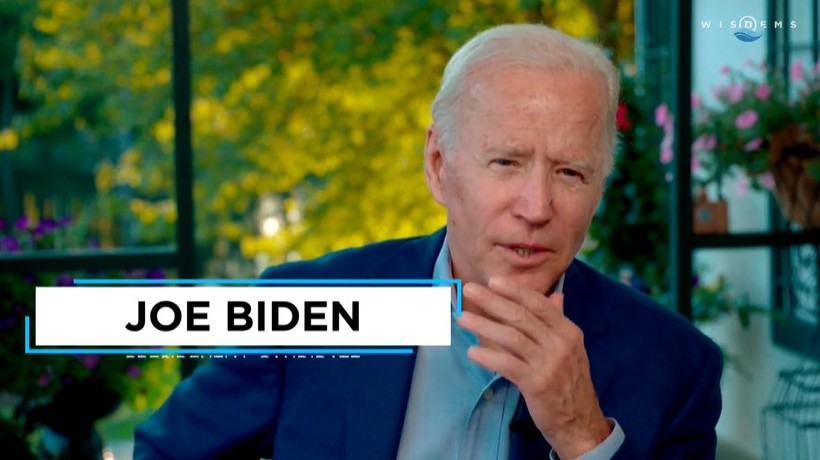 Biden To Wisconsin Democrats: It's Time To Face Systemic Racism

Democratic presidential nominee Joe Biden told Wisconsin Democrats Friday that George Floyd's death and the coronavirus pandemic had created multiple national crises and that the "very soul of America" was at stake in this year's election.

Biden delivered his message in a recorded video for the Wisconsin Democratic Party's annual convention. Democrats held the convention virtually this year in an effort to prevent the spread of COVID-19.

Biden began his speech by recalling the dying words of Floyd, who said "I can't breathe" as a Minneapolis police officer kneeled on his neck late last month.

"It's outrageous and it's enraging," Biden said. "And none of us can turn away. None of us can be silent. We're dealing with multiple national crises, and we need real leadership right now."

Biden told Democrats the country needed leadership that would bring everyone to the table to root out systemic racism.

"It's time for us to face the deep, open wound of systemic racism in this nation," Biden said. "Nothing about this is going to be easy or comfortable, but if we simply allow this wound to scab over once more without treating the underlying injury, we will never truly heal."

Biden told Democrats they needed to stand up "with black and brown communities" to win the battle for the soul of the nation.

The former vice president spoke for just two-and-a-half minutes, a remarkably short address by the standards of a usual convention keynote address.

Likewise, other speakers kept their remarks short, including Biden's recent opponent in the Democratic presidential primary, Vermont U.S. Sen. Bernie Sanders. Sanders said Democrats needed to defeat President Donald Trump, but he also called on them to consider what kind of country they wanted to become.

"I urge all Democrats to fight to make sure that we have an economy that works for all of us," Sanders said, reiterating his support for a Medicare-for-All single-payer health care system.

Like Biden, Wisconsin Democrats also signaled their support for the protests that have sprung up in the wake of Floyd's death.

"Let us unite today in solidarity with the Wisconsinites in the street," said Felesia Martin, the Democratic Party of Wisconsin's first vice chair.

Several Democrats also highlighted the importance of preventing Republicans from picking up more seats in the Legislature. If Republicans pick up three seats in the Assembly and three in the Senate, they'd have supermajorities, which would let them override Democratic Gov. Tony Evers' vetoes.

"We have to ensure that my veto stays intact," said Evers.

The governor's veto could prove especially important next year during the next round of redistricting.

In 2011, Republicans controlled both the governor's office and the Legislature, which let them draw legislative district lines that helped Republicans win elections for a decade.

As things stand now, Evers has the power to veto any map Republicans draw next year, but he could lose that control if Republicans pick up more seats.

"They want more power so that they can get more power," Wikler said of Republicans. "They want to re-gerrymander our maps."

While Democrats were roundly critical of systemic racism at their convention, they didn't offer many specifics about how they plan to address it.

"Wisconsin Democrats' virtual 'convention' format conveniently lets them and their presidential nominee hide from cries to defund the police, their blatant lack of transparency and their disastrous record of failing Wisconsin," Hitt said.

While the COVID-19 pandemic forced Republicans to reschedule their annual state convention, the state GOP is still planning to hold an in-person convention in July.

And Democrats are still planning to hold the Democratic National Convention in Milwaukee in August through a combination of virtual and in-person events.