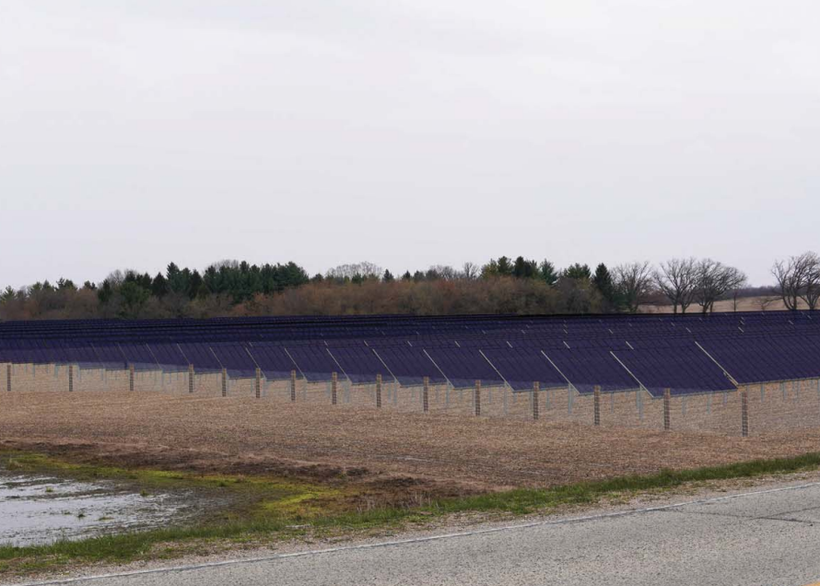 This is a rendering of what the Darien Solar Energy Center could look like. The $451 million project took another step forward last week when the Public Service Commission of Wisconsin unanimously approved Wisconsin Public Service’s purchase. Photo courtesy of the town of Darien

Project is part of parent company's goal to become carbon neutral by 2050
By Joe Schulz
Share:

A $451 million solar and battery project is moving forward in southern Wisconsin, the latest in a series of developments from utilities working to meet goals to cut carbon emissions.

The solar center is under construction on 2,000 acres in Rock and Walworth Counties. It will feature 850,000 solar panels, and will generate enough energy to power about 75,000 homes. It will also feature 75 megawatts of battery storage.

"The battery storage component that's part of this facility will be able to store that solar generated energy and then discharge it to the grid so that our customers can use that solar energy even after the sun has gone down," said Matt Cullen, senior communications specialist for Wisconsin Public Service.

Construction on the facility began earlier this year, and it is expected to come online by late 2024. Cullen said the project is part of a larger goal by the parent company, WEC Energy Group, to invest $5.4 billion in renewable energy over the coming years.

"The steps that we're taking will help us create a bright, sustainable future, while also providing our customers with approximately $2 billion of savings over the next 20 years," he said. "Those are really the impacts that our customers will see: Reducing cost to them, reducing carbon emissions and preserving that diverse mix of facilities we can use to provide them with energy."

As part of its approval, the Public Service Commission will require WEC Energy Group to provide updates on efforts to hire Wisconsin-based construction laborers at the project site.

That reporting requirement was proposed by Commission Chairperson Rebecca Cameron Valcq. She said it was important to report the local jobs created, especially when the utility is "touting economic benefits of (the) project to a host community."

Commissioner Tyler Huebner agreed. He said the requirement would not be difficult for the utility.

"It sheds a light on — in a good way — how successful are we? Because we've got a lot of Wisconsinites that can work in this industry," Huebner said. "And I think that that’s important."

In a statement, WEC Energy Group President and CEO Scott Lauber said the utility was appreciative of the commission’s review and approval of the project.

"Combining utility-scale solar with battery storage will allow us to extend the benefits of renewable energy and provide our customers sunshine after sunset," he said.

WEC Energy Group spokesperson Brendan Conway added that the Darien Solar Energy Center is the second of WEC’s large-scale solar and battery projects to be approved in recent years.

The previous project was the Paris Solar-Battery Park in Kenosha County, which was approved in March 2022 and features 110 megawatts of storage. That site is scheduled to go into service next year.

"These are important as they come online, creating green jobs," he said. "(It’s) really exciting to continue to kind of see these plans go in as we are really moving aggressively to reduce greenhouse gas emissions."

"We've been able to partner with Madison Gas and Electric on a number of our other renewable energy facilities that we've brought into service, specifically solar energy facilities," Cullen said.

Those past partnerships include the Two Creeks Solar Park in Manitowoc County, the Badger Hollow Solar Park in Iowa County and the Paris Solar-Battery Park.

Cullen said solar energy has become a key area of investment for WEC Energy Group as it works to become net carbon-neutral by the end of 2050.