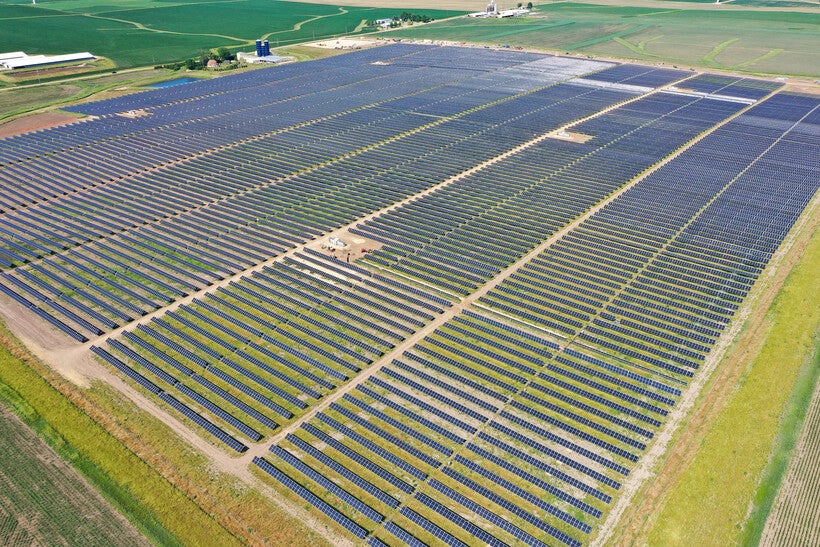 We Energies, Wisconsin Public Service and Madison Gas and Electric are acquiring the 200-megawatt solar project that will produce enough power for around 60,000 homes, as well as provide 110 megawatts of battery storage.

Chicago-based developer Invenergy is building the 1,500-acre project in the town of Paris. We Energies and WPS, owned by WEC Energy Group, will own 90 percent of the project while MGE would own the remaining 10 percent.

The three utilities say the project is part of efforts to go carbon-neutral by 2050, which is in line with Gov. Tony Evers' goal for utilities to produce carbon-free electricity in the next 30 years. Construction is set to begin this year, and the project will begin operating in 2023.

"The Paris Solar-Battery Park is part of our commitment to invest $3.5 billion in renewable energy projects in the coming years. These investments will help us aggressively reduce greenhouse gas emissions while providing affordable, reliable and clean energy for a sustainable future," said Scott Lauber, president and CEO of WEC Energy Group, in a statement.

Jeff Keebler, president and CEO of Madison Gas and Electric, said in a news release that the first addition of utility-scale battery storage is "a new and important technology" that will aid the company's transition to clean energy.

Even so, ratepayers advocacy groups raised affordability and reliability concerns with the project. Many of those concerns revolved around the multi-billion dollar plan by We Energies and WPS to retire and replace around 1,600 megawatts of fossil fuel plants.

Wisconsin's Citizens Utility Board argued utilities failed to consider alternatives and conduct a specific review of the project to show whether it was cost-effective. Wisconsin Industrial Energy Group also questioned the cost and speed of the transition by We Energies and WPS over the next three years, as well as the use of battery storage that hasn't been tested at the utility-scale in Wisconsin.

PSC Chair Rebecca Valcq shared the groups’ frustrations with the plan. Even so, Valcq said state law limits regulators in what they can consider when approving such proposals. While she approved the project, Valcq put utilities on notice that more robust reviews of alternatives should be conducted on future projects.

"The need to have this multi-billion dollar generation reshaping plan done in a matter of two to three years is not being driven by any law in Wisconsin," Valcq said. "I think the applicants need to do better. I think they all owe it to their customers."

PSC Commissioner Ellen Nowak said she didn’t share the same concerns about utilities' review, highlighting long-term savings for customers. We Energies and WPS have said their plan to transition to renewable energy will save customers more than $1 billion over the next two decades.

"There's not a statutory mandate to do it, which I'm glad there's not. But, I also think that if we said, 'Well, let's not do it now, and wait,' there's going to be criticism that why is Wisconsin so far behind on other states (and) not moving to renewable energy," Nowak said.

Scientists have urged governments to accelerate efforts to cut carbon emissions as the effects of global warming are occurring faster than expected.

"Before those plant closures occur, the flow of electricity from the Paris project will displace fossil-fueled generation elsewhere, which will measurably reduce the volume of airborne pollutants and greenhouse gases discharged from Wisconsin sources," Vickerman said.

Even so, the Citizens Utility Board argued utilities failed to consider energy conservation, alternative sites, and varying sizes of solar panels and battery storage. Tom Content, the board's executive director, said the commission could have taken time to request more information from utilities, but he said it was heartening that commissioners echoed the group's concerns.

"By shutting down coal, you should get savings. But given the rate pressures that customers are under today, it's incumbent to really evaluate every single project as carefully as you can to make sure it's needed and cost-effective," Content said.

He said a lack of planning has led to overbuilding of power plants in the past, adding Wisconsin's energy costs are higher than the Midwest and national average. The group had urged a broader review including a wider range of natural gas prices "to understand how the proposed project would withstand gas price unpredictability and, ultimately, to protect customers."

Last fall, the U.S. Energy Information Administration forecasted higher natural gas prices during the winter months. While prices fell in the Midwest this week, Russia’s invasion of Ukraine is placing upward pressure on prices. Content said that illustrates the need for a broader review of utilities’ plans.

PSC Commissioner Tyler Huebner said natural gas prices didn’t concern him. He said higher prices would mean that solar power and battery storage offered through the Paris project would only yield more benefits for customers. Even so, he agreed utilities should be considering a wider range of prices.

"Because we don't know what the future is going to hold," Huebner said. "Obviously, the last month has shown us there are international events that will be unseen and out of our control that will affect those prices."

We Energies and WPS disputed claims brought by customer advocacy groups in comments filed with the commission, highlighting energy conservation alone won't make up for lost capacity as plants are retired. The utilities argued its modeling is designed to represent a range of possibilities rather than every change that may occur "no matter how unlikely."