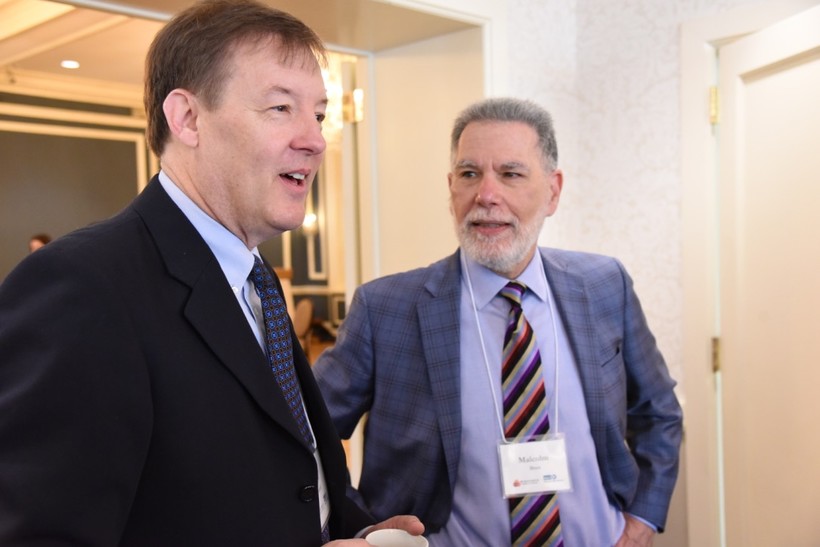 The director of Wisconsin Public Media, Gene Purcell, has died following a traffic crash in Madison. Friends and colleagues say they're heartbroken by the sudden loss of a man who lived a commitment to public broadcasting with humility and authenticity.

For well over a decade, Purcell has played major roles in supporting the organizations that contribute to what audiences know as Wisconsin Public Radio and PBS Wisconsin.

Purcell became the director of Wisconsin Public Media in 2018. The organization, which provides statewide access to WPR and PBS Wisconsin, is a division of the University of Wisconsin-Madison. Prior to that, he was executive director of the Educational Communications Board, which licenses and maintains the statewide network of public radio and television stations.

On Saturday, Purcell succumbed to injuries sustained in a crash outside the ECB offices in Madison. He was 61 years old.

Before entering management, Purcell transitioned from reporter to news director at the independent public radio station WLSU in La Crosse. In 1997, he headed the station's merger with WPR.

Longtime friend Kathy Landsinger told WPR she met Purcell as a mass communications student at UW-La Crosse during the 1992-93 school year. She was having problems with equipment in the campus radio lab one evening and walked into the hall to see if anyone could help.

"I ran into this guy and I said, 'Hey, do you know anything about radio?' And this guy says, 'I know just enough to get by.' Well, that was your humble Gene Purcell," said Landsinger.

Michael Starling was another mass communications student who became a close family friend to Purcell and his wife, Ruth. Starling said the two of them worked together at UW-La Crosse's student newspaper, The Racquet, where Purcell dabbled in satire in addition to reporting.

"He wrote a very funny weekly column for us about college life called 'Tales of the Mundane,'" said Starling. "He was La Crosse's answer to Dave Barry before we even knew there was a Dave Barry."

ECB Executive Director Marta Bechtol said she's heartbroken to lose such a good friend and colleague. She said Purcell served as a mentor when he was director of the agency and she served as a deputy. Bechtol said they encouraged employees and management to view the various agencies, bureaus and networks that make up WPR and PBS Wisconsin as a single effort, not separate organizations.

Bechtol said Purcell loved talking about the history of public radio, WPR, PBS Wisconsin and the network of transmitters and computer servers known as ECB. She said part of the job is advocating for public broadcasting through lobbying of state and federal lawmakers.

"And honestly, it's one of the few times Gene ever put a tie on," said Bechtol.

Bechtol said Purcell's ability to listen to and connect with lawmakers, engineers and others helped to take over ECB when Purcell transitioned to director of Wisconsin Public Media.

"I'm wound up a bit tighter than Gene," said Bechtol. "And just sort of feeling him relaxed and seeing him look relaxed taught me how to do that more comfortably as well."

WPR producer and reporter John Davis became friends with Purcell in the late 1980s when he was a student at UW-La Crosse. After graduation, Davis said he worked briefly at commercial radio stations in Iowa and southeastern Minnesota, but it wasn't a good fit for him. Purcell eventually hired Davis as a reporter for WLSU, which led to a full-time job with WPR when the station merged with the statewide network.

Davis said the two of them "spent a lot of nights" sharing drinks, shooting pool and telling stories after the workday was over.

"I've heard these stories a million times," said Davis. "What I wouldn't give to sit down with him with an adult beverage and hear the same stories over and over again."

WPR regional manager Dean Kallenbach called the suddenness of Purcell's passing "hard to fathom." He said Purcell brought a solid vision and commitment to putting state and local programming on the air.

"And that's been the case in his positions with the Educational Communications Board and UW-Madison," said Kallenbach. "He had a dedication to making sure that we served the audience of Wisconsin."

WPR Director Mike Crane said he looked forward to his many meetings with Purcell after joining the radio network in 2007, which would often include stories from their early days in broadcasting.

"And he was just so truly genuine, unpretentious," said Crane. "People even today talked about how they felt like he never put on airs, that he just was really very interested in listening to you and talking with you."

Gene Purcell is survived by his wife, Ruth, his mother, Toni, along with three brothers and a sister. A Wisconsin Public Media statement said a celebration of Purcell's life will be scheduled at a later date.