Wisconsin public defenders say creative solutions are needed to deal with a backlog of thousands of criminal cases in the state's courts.

Last month, Wisconsin State Public Defender Kelli Thompson told WisPolitics a shortage of public defenders means it will take years to get through a 35,000-case backlog. She said her agency, which had around 615 full-time equivalent positions in the 2019 fiscal year, is around 20 percent short of being fully staffed.

The consequences of being short-staffed are far-reaching.

Around four out of five criminal defendants have to rely on court-appointed lawyers and public defenders because they lack the means to hire their own attorney, according to the American Civil Liberties Union.

Kate Drury is the regional attorney manager for the Stevens Point area of the Office of the Wisconsin State Public Defender.

"Workload is absolutely a factor," Drury said Wednesday. "So (are) other factors like access to child care or financial incentives that the private sector is able to offer to our attorneys that the public defender agencies simply can't compete with."

Drury said she represents "people who've had really difficult lives who've dealt with habitually frequent poverty and find themselves on the wrong side of the issue by making a bad choice."

"My role is really to sit with the client and talk to them, talk about the case, talk about who they are, and help the court system try to problem-solve the issue that brings the individual into court," Drury said.

"We take our responsibility to defend our client very seriously," Drury said. "We might be forced to request a continuance or a delay as a result of that, because prosecutors are also experiencing these higher volumes of cases, too. They're in a similar boat as public defenders."

"The friction of being in a room together frequently and building towards that trial date has a huge impact on how we're able to resolve cases and how cases are able to get kind of clarified," Cardamone said.

Cardamone said some attorneys in his office are handling more than 200 cases at a time. He told "The Morning Show" he believes mentoring would help offer support for public defenders.

"I see my colleagues, you know, bearing that weight every day, and they're incredibly brave and strong advocates, and they hold themselves to the highest standard," Cardamone said. "Mentorship ... not only helps them to be better lawyers, it gives them confidence, it helps them weather through some of the storms that they're going to face and some of the difficulties they face being public defenders managing high case loads."

Cardamone said "efficiency means a lot" with the backlog being as significant as it currently is.

"When they have lawyers that have been around, have the confidence and the experience and frankly, the discretion to be able to act quickly, that experience is really vital," Cardamone said. "If we lose that experience, we're going to have a really hard time getting back on top of what is already a very difficult situation."

"We have the ability to see people in that moment and see beyond it," Cardamone said. "If the system is going to work, and if it's going to work right, we have to make sure that the other players in the system like the prosecutors and the judges can see that human being, and that's why our job is so important."

Thompson told WisPolitics work is ongoing with lawmakers to address the budgetary issues that feed into the backlog.

Defending the constitutional right to counsel 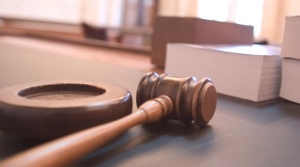 It will take years to clear a backlog of 35,000 cases pending in the Wisconsin court system, according to reporting by WisPolitics. What does that mean for defendants awaiting trial, and the public defenders who represent them? We hear from two public defenders about their job on the ground.