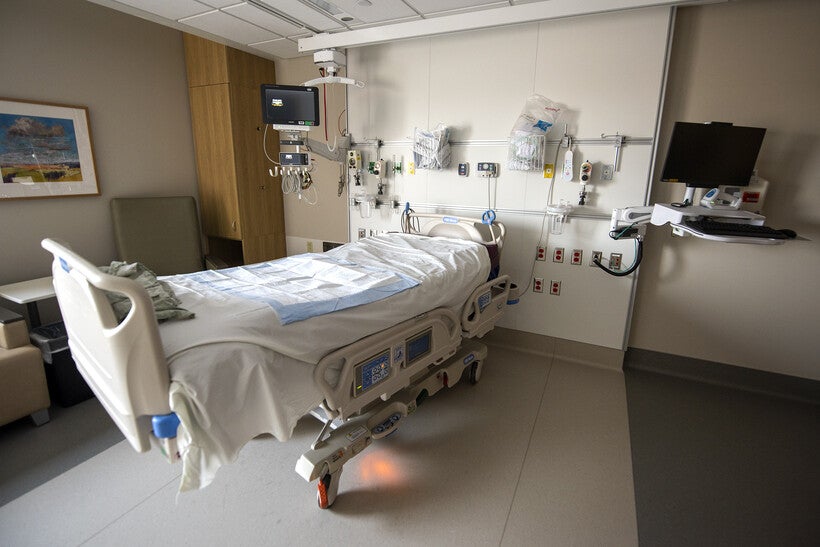 An empty room in the ICU on Wednesday, Jan. 5, 2022, at Meriter Hospital in Madison, Wis. Angela Major/WPR

The state is projected to be 20K nurses short by 2035.
By Leah Treidler
Share:

As the demand for nurses grows across Wisconsin, nursing education programs are struggling to churn out enough graduates — but not for lack of applicants. Instead, schools are facing dwindling numbers of faculty and limited classroom space, forcing them to turn away prospective students.

"There's just no way we're ever going to really get out of the shortage. Most of the nursing programs in the state, including (Edgewood College), have increased their enrollment as much as they can. But without faculty and sites and classrooms, we're really limited on how much we can admit," said Margaret Noreuil, the dean of Edgewood College's school of nursing in Madison.

Around 3,000 Wisconsin nurses join the workforce each year, and at that rate, the state is projected to be short almost 20,000 registered nurses by 2035.

Each year, Edgewood College's undergraduate nursing program receives about 200 applications for only 90 spots, Noreuil said, forcing them to turn away more than half of the prospective students. Across the country, according to the American Association of Colleges of Nursing, nursing schools turned away 80,407 qualified applicants in 2019.

Part of the problem is there aren't enough qualified faculty members to teach at nursing programs, Noreuil said. According to a 2019 AACN survey, there were 1,637 unfilled faculty positions across 892 nursing schools in the U.S.

"What we're seeing now is a dual problem that there's an increasing need for nurses in practice. Simultaneously, it's hard to ramp up availability for spots for nurses coming into the profession," said Jill Guttormson, the dean of Marquette University's College of Nursing.

One reason, she said, is education. While nurses need an associate's or bachelor's degree to practice, Guttormson said, nursing educators need at least a master's degree.

"That's typically an additional two to three years on top of the four years of the bachelor's degree," she said. "So it's additional education, which comes with additional costs."

Despite the added education and student loans, she said, nurse educators tend to make less money than practicing nurses. According to the Bureau of Labor Statistics, nursing instructors and teachers in Wisconsin make an average of $78,850 per year, whereas nurse practitioners earn $116,990 on average.

And now, the shortage of nurse educators is set to get worse, Guttormson said.

"Many current nurse educators are approaching retirement in the next 10 years or so," she said. "So we may start to see people leaving education. So we really need to work to support nurses coming into educating the next generation of nurses."

"We're going to reach a crisis with a nursing shortage soon if we do not really address this at all fronts, which is increasing capacity for training nurses, looking for creative models of care that allow nurses to really function at their highest level of practice in the healthcare setting," Guttormson said, "and supporting those that really have passion for education to have a viable path to be a nurse educator."

But while the shortage of faculty grows, the demand for nurses is expected to rise, too, said Gina Dennick-Champion, the executive director of the Wisconsin Nurses Association.

"The older population is certainly emerging," she said. "And with that, more demand for care, anywhere from the acute care setting to the community."

Since the start of the pandemic, nurses have had to face a lack of respect by patients and families, along with rising workplace violence, Dennick-Champion said, leading many to shift from working in hospitals to other settings, like primary care clinics and telehealth services. That makes critical bedside positions harder to fill.

But there are programs in the state aiming to solve the shortage, according to Dennick-Champion.

That project, the Nurse Educator Loan Program, received $5 million, she said. For people to receive the money, she said they have to commit to working as an educator in a school of nursing in the state for at least three years after graduation.

A new project at UW-Green Bay is also working to fill the gap, according to Missy Hughes, the CEO of the Wisconsin Economic Development Corp. The university recently received a $376,000 Workforce Innovation Grant to develop an instructor program for nurses, Hughes said.

"This program through UW-Green Bay and partners in the health care industry in the Green Bay area is really going to ramp up the number of (nursing) teachers we have," she said, "and in that way, we'll be able to then have more nurses."