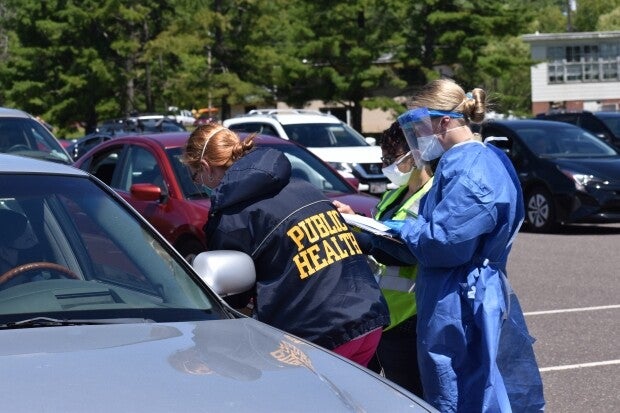 The B.1.617.2 Variant Is Still Rare In Wisconsin, But Experts Urge Vaccination To Slow Spread
By Madeline Fox
Share:

The Wisconsin Department of Health Services on Thursday began tracking the number of COVID-19 cases caused by the B.1.617.2 variant, also called the delta variant, after it was designated a "variant of concern" by the Centers for Disease Control and Prevention.

According to DHS's Thursday numbers, there have been 35 cases traced to the delta variant in Wisconsin, out of 16,024 total coronavirus genomes that have been sequenced in the state. An additional 4,261 sequenced genomes were attributed to other variants of concern. Variants are designated "of concern" by the CDC if they show evidence of causing more severe illness, being more contagious or are more difficult to treat using known methods.

"Our sequencing data suggest that the new delta variant has been relatively rare in Wisconsin, but we saw it become the dominant variant in the U.K. very quickly," said Thomas Friedrich, professor in the Department of Pathobiological Sciences at the University of Wisconsin-Madison’s School of Veterinary Medicine. "The proportion of cases caused by the delta variant throughout the U.S. is increasing, so it's only a matter of time before it becomes more common in Wisconsin, I expect."

The United Kingdom put off its next planned relaxation of coronavirus-related restrictions in response to the spread of the delta variant in Britain. The strain was first identified in India in samples from October 2020, and is one of several circulating variants of concern, both worldwide and within Wisconsin.

"Wisconsin continues to report an increasing proportion of COVID-19 cases across the state that are variants of concern," DHS Secretary-designee Karen Timberlake said in a news release. "We urge Wisconsinites to protect themselves, their families, and their communities by getting vaccinated. The sooner people get vaccinated against COVID-19, the less opportunity for the virus to keep mutating."

As much of the world remains unvaccinated, there are more possibilities for the coronavirus to spread, mutate and develop in ways that may make it harder for people's antibodies to detect and fight off, or that may cause more severe disease.

"The more infections there are, the more chances the virus has to pull the handle of the evolutionary slot machine, and so the greater the likelihood it will hit on some combination of mutations that helps it," said Friedrich. "As long as there are places in the world where there's a high burden of infections and a lot of people are getting sick — and unfortunately that's still most places in the world where there's not a lot of vaccination — we're still going to see the emergence of new variants."

"It has some immune escape mutations that might make it a little bit harder for our antibody responses to recognize this virus," said Friedrich. "I should say, though, that there's also new data suggesting that the existing vaccine should protect us very well against infection and severe disease even with this delta variant."

Additionally, for people in families where not all members are vaccine eligible, or for whom underlying conditions mean they either cannot get vaccinated or vaccines are not as effective, the same tools that were used to slow spread before vaccination was widely available in the U.S. are also effective in slowing variants — social distancing, wearing masks and moving as many group activities outside or into very well-ventilated areas as possible.

"The ideas aren't new — being outside is safer than being inside, having smaller gatherings is safer than having larger gatherings, and as long as kids are still susceptible, thinking about ways to protect them using masking and distancing is going to remain important," he said.