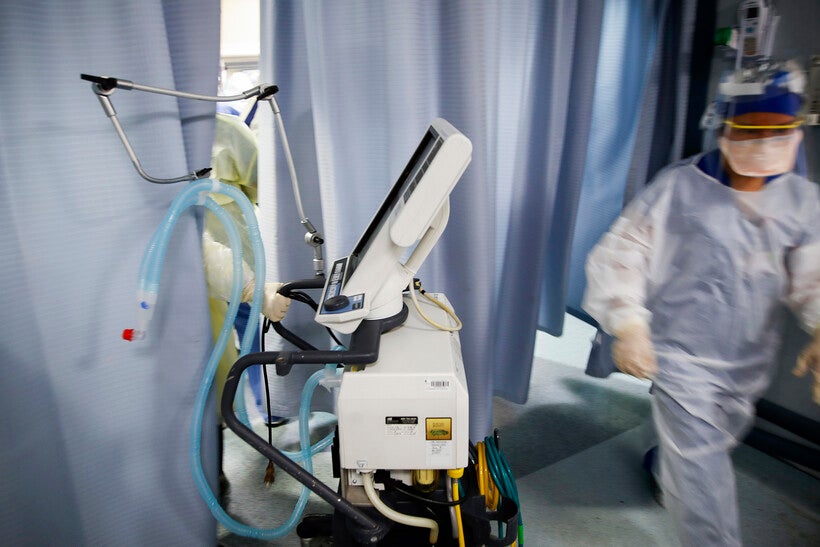 In this April 20, 2020, file photo a nurse pulls a ventilator into an exam room where a patient with COVID-19 went into cardiac arrest at St. Joseph's Hospital in Yonkers, N.Y. John Minchillo/AP Photo

New Cases Of COVID-19 In Wisconsin Continue To Climb
By WPR Staff
Share:

DHS reported 7,048 new cases of the disease Wednesday, bringing the average for the past seven days to 5,984 daily cases. Daily new cases have been rising since early September, when the average was less than 700.

There were 62 new deaths from COVID-19 reported Wednesday. On Wednesday, 10,424 tested negative.

According to DHS, there were 2,102 COVID-19 patients hospitalized as of Wednesday. A total of 13,507 people have been hospitalized because of the disease, or 4.7 percent of all known positive cases.

The high numbers of patients hospitalized with COVID-19 has strained hospitals across the state, causing stress on health care workers and infrastructure, said Dr. Ryan Westergaard, the chief medical officer for DHS, in a panel discussion Wednesday hosted by Wisconsin Health News.

So far, Wisconsin hasn’t seen hospitals overwhelmed to the point that they are not able to care for non-COVID patients who require emergency medical help. Advances in medical treatments have also contributed to lowering the mortality rate, and as a result "the case fatality rate is kind of low, relative to what we’ve seen elsewhere," Westergaard said.

"But there’s real danger," he said. "We’re close to a tipping point, where this could get much worse quickly."

That tipping point would come when hospitals and health systems are overwhelmed to the point that they cannot care for those who are seriously ill, whether with COVID-19 or other illnesses.

"We are truly all at risk if we have hospitals and health systems that aren’t able to be there for us when we need them," Westergaard said.

Nearly 36 percent of people who got tested for COVID-19 over the past week were positive for the disease, according to DHS. That rate is at an all-time high.

On Sept. 30, DHS also introduced an alternative positivity rate, one that measures the percentage of tests that are positive, instead of the percentage of people who get a positive result. The new metric takes into account people who have been tested multiple times. The seven-day average for that number is at 18 percent.

Wisconsin's daily testing capacity — based on the availability of test supplies and adequate staffing — has grown from 120 available lab tests in early March to 59,197 as of Wednesday. The number of actual people with new test results reported Wednesday was 17,472.