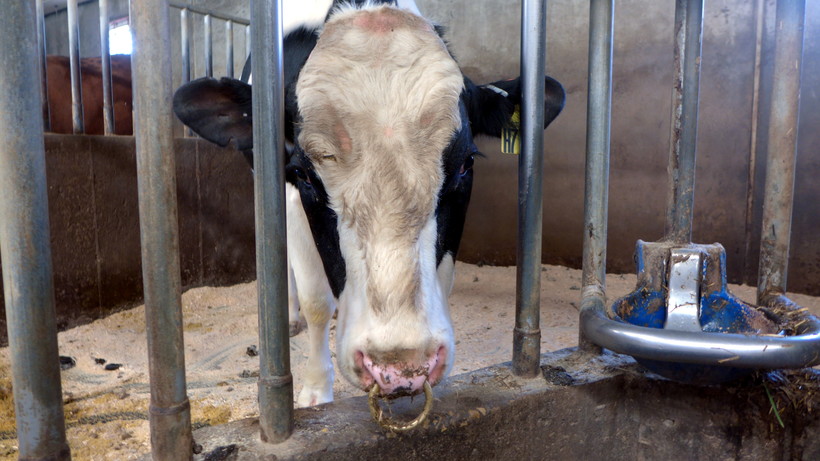 15-month-old Jump is one of Accelerated Genetics' top bulls.

State Accounted For More Than Half Of U.S. Bovine Semen Exports In 2014
By Maureen McCollum
Share:

On a recent day at Accelerated Genetics’ production facility in the western Wisconsin community of Westby, some of the company’s 200 bulls were resting after a hard day’s work. Herd manager Ron Herricks and his staff had earlier collected semen from dozens of the bulls, taking two to four collections from each cow.

"Every bull has a personality just like we do. There are some that can produce a lot more than others. That’s just the way it is — that’s the way God created them," said Herricks.

Accelerated Genetics is one of the largest genetics companies in the world, selling semen and embryos in 96 countries, plus the United States. The European Union is its biggest customer.

In fact, while Wisconsin is known for cheese and cranberries, the state is also a top exporter of cattle genetics. The history and quality of Wisconsin’s livestock has made the state’s genetics a sought-after product.

Accelerated Genetics, along with other companies across Wisconsin, accounted for more than half of all U.S. bovine semen exports last year. Those Wisconsin exports had a value of almost $91 million. Wisconsin also sold millions of dollars in embryos overseas last year.

Data courtesy of the Wisconsin Department of Agriculture, Trade and Consumer Protection

Dr. Dan Hornickel is the co-founder of Whitewater-based Sunshine Genetics, one of the first companies to sell dairy cow embryos to farmers.

"The demand for embryos and semen around the world is really motivated by the fact that our genetic level in the United States, and especially in Wisconsin, is quite high," Hornickel said.

He said Wisconsin producers have a history of breeding quality livestock, and farmers around the world want those genetics: "People have found this as a tool to improve the meat and milk production in their own countries."

Wisconsin’s top genetics customers outside of the U.S. are Brazil, the United Kingdom, and China. Enrique Gandara is an international economic development consultant with the Wisconsin Department of Agriculture, Trade and Consumer Protection. While demand is growing in countries with existing trade deals, he said there are opportunities to open new markets.

"When it comes to Wisconsin genetics, I tell you what: We’re exploring and we’re realizing that, believe it or not, countries like Morocco, Iraq, there’s a huge number of opportunities," said Gandara.

South Africa is another country where the genetics market could expand, according to Gandara.

Companies like Shawano-based Genex Cooperative are confident new markets will open up and demand will grow worldwide.

"What we used to refer to as former third-world countries, as their economies improve, one of the first things they do when their income rises is they want to eat better. So that’s increased consumption of typically protein — beef, meat, and dairy products," said Dr. Glen Gilbert, the vice president of production at Genex.

Rules surrounding semen and embryo exports vary by country and can change on any given day. Politics can create huge barriers. For example, Ukraine and Turkey had been purchasing more bovine semen from Wisconsin, but closed the door to all imports as turmoil spread in those countries.

Valerie Gaffney said the idea of moving into the international markets is intimidating, but she wants to take those challenges on. Her family breeds Angus beef cows in Barneveld, west of Madison. They sell some embryos domestically.

In five to 10 years, Gaffney said they may hire someone to expand their genetics operation.

"It would involve us having a different mindset within our operation of creating the embryos, gathering the semen, and being able to meet the health guidelines to get it beyond U.S. doors and get into markets we need to get to," said Gaffney.

And with semen and embryos going for hundreds or thousands of dollars a pop, Gaffney said it could bring in a lot more money to her family farm.

Here's a rundown of the top 10 importers of Wisconsin bovine semen in 2014:


Data courtesy of the Wisconsin Department of Agriculture, Trade and Consumer Protection