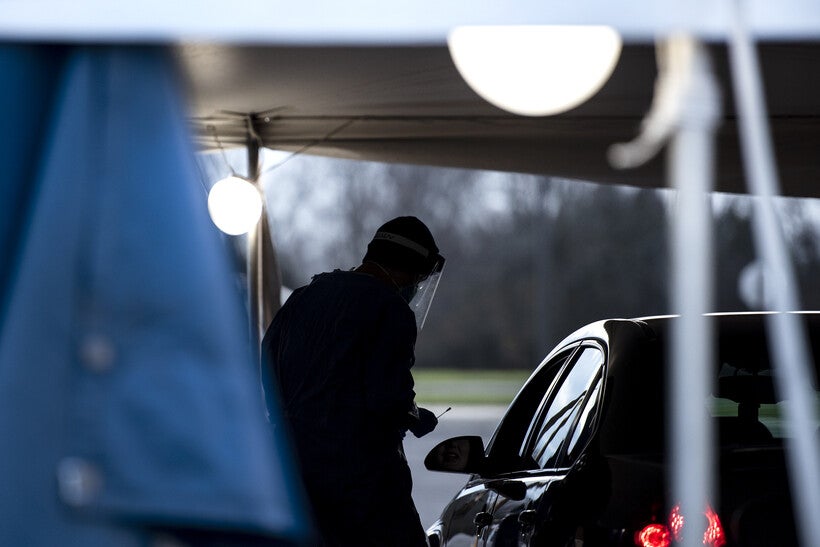 The Wisconsin Hospital Association is calling on Gov. Tony Evers and the Republican led state Legislature to work together and take immediate action to slow the spread of COVID-19 and help hospitals struggling to care for a growing surge of new patients.

Borgerding said no one is more "burned out" from COVID-19 than health care workers at the state's hospitals.

"But their exhaustion, and increasingly their frustration, is compounded by the still unmitigated spread of COVID," Borgerding wrote. "The spike in cases, surge in hospitalizations and increasingly strained health care workforce is a devastating combination that calls for unity and action."

In an interview with WPR said it's hard to overstate the long hours and emotional stress doctors and nurses are facing.

"This is an awful situation," said Borgerding. "And the toll it's taking on our health care workforces is really tragic."

On Thursday, the Wisconsin Department of Health Services reported 83 deaths from complications associated with COVID-19. That's the second highest single-day death total since the pandemic began. DHS reported 2,217 patients are currently hospitalized with the disease across the state.

"With few tools available right now to curb spread other than increasingly urgent public appeals, our COVID numbers are growing rapidly and predict, quite accurately so far, a health care crisis in Wisconsin that without significant, swift and unified action will become a catastrophe," Borgerding wrote in the letter.

The WHA letter outlined a series of steps lawmakers could take to both slow the rate of community spread and help the state's health care system treat those requiring hospitalizations.

Borgerding said the spread could be slowed with things like a statewide mask policy and affirming local governments' right to enact local policies aimed at reducing COVID-19 transmission.

To increase hospital capacity, Borgerding said state-elected officials can enact policies that would make it easier to bring in health care workers from outside Wisconsin by providing financial assistance to help pay for more expensive traveling doctors and nurses known as "agency staff." The letter applauded the state for providing $80 million to long-term care facilities in the form of $2,900 payments to nursing homes that take residents who are ready to be discharged from the hospital. Borgerding said lawmakers "must now respond with a similar commitment for our state's severely challenged hospitals."

The WHA letter also praised the state's decision to open and maintain an alternate care facility at the Wisconsin State Fairgrounds in West Allis that provides a space for recovering patients that are not well enough to go home. Borgerding said building others around the state would make it easier for hospitals outside southeastern Wisconsin to transfer patients there.

Borgerding told WPR he believes all state lawmakers want to do what they can to protect the state's residents amid the pandemic though they may disagree how to get there. But he said now is the time to find common ground.

"Because all or nothing, from either side, means more often than not, nothing," Borgerding said. "And that's that's not what Wisconsin needs right now."