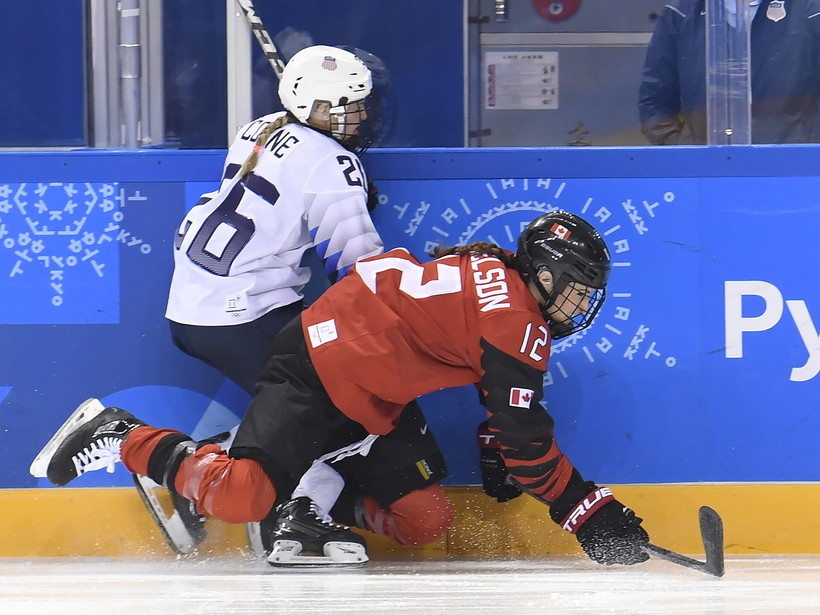 Wisconsin Hockey Represented On Both Sides Of Gold Medal Game

Once again the Olympic women's hockey tournament comes down to Team USA and Team Canada.

This will be the fifth time in six Olympic women's hockey tournaments that these two teams have met in the gold medal game.

For Wisconsin hockey fans, the game has a lot to offer because players with ties to the state are on both teams' rosters. Three members of Team USA are Wisconsin natives, while both U.S. and Canadian players have connections to the University of Wisconsin-Madison hockey program.

Todd Milewski: She did win a national championship with the Badgers. She was the Patty Kazmaier Award winner as the top player in Division I women's college hockey in 2012, the No. 2 overall goal scorer for the Badgers in their history and second in points.

This is her second Olympics. She's become, really, a mainstay on that team and is one of the alternate captains, the reason for that being she has this positive impact on teammates, on the ice and off the ice.

BC: One of the players who points to Brianna Decker is Alex Rigsby, who's in goal for Team USA and who still trains in Wisconsin.

TM: Alex is a top goaltender in the college ranks. She still leads the Badgers in saves and wins and games played in her four-year career. She had one national championship. She was a senior in college the last time the Olympics were played in 2014, so this was the goal she had set, and she's made the roster now.

It kind of depends on when she's going to get a call to play in the games — it's a really competitive situation the U.S. has in goal — but she's put herself in a really good position through what she's done in world championships and other events with USA Hockey in the last two years.

BC: Madison native Amanda Kessel was on the 2014 team and is back this year. In between, though, there was a time she didn't expect to be competing anywhere, much less at the Winter Games. What happened?

TM: She had troubles with concussions.

She played at Minnesota from 2010 to 2013 and then was gone for a couple of years. Obviously one of those was for the Olympics, but then she had troubles with concussions, and it looked like for a while that might have been the end of her career. But she did come back and play again for Minnesota in the second half of the 2015-16 season and helped them to a national championship again, which was her third with the team.

It kind of reinvigorated her career and now she's back in her second Olympics — and (it) really seems like (she) hasn't missed a beat from that injury. Players from the United States gather before the preliminary round of the women's hockey game against the team from Russia at the 2018 Winter Olympics in Gangneung, South Korea, Tuesday, Feb. 13, 2018.Frank Franklin II/AP Photo

But then you also have five players that played for the Badgers on this year's Canadian women's hockey team.

One of them played a few years back ... Meaghan Mikkelson, a veteran defenseman. And then (there are) some more recent players: Blayre Turnbull, who was a captain here in 2015; and then three players just from last year's team, Emily Clark, Renee Desbiens and Sarah Nurse.

Emily Clark actually has one more year of eligibility with her, so she will come back next season and play for the Badgers again.

BC: The current UW hockey team has been ranked No. 1 in the nation for much of this season. Are there current Badgers players you wouldn't be surprised to see on the ice for Team USA or Team Canada or another team in four years?

TM: That's what you expect out of this program now. It really has become a training ground for an Olympic team, and you don't have to look much farther than the head coach for a reason why: Mark Johnson, who was an Olympian on in the 1980 "Miracle On Ice" team. He also coached the U.S. Olympic women's hockey team in 2010 in Vancouver.

I think there's a standard set, there's a level that is expected that players will reach that will at least get them in contention for a national team. And there are some players, maybe on this year's team, maybe on next year's team, that will be in that conversation four years down the road.

See you at the semifinal, @usahockey! 😉🙌🇺🇸 #GoTeamUSA