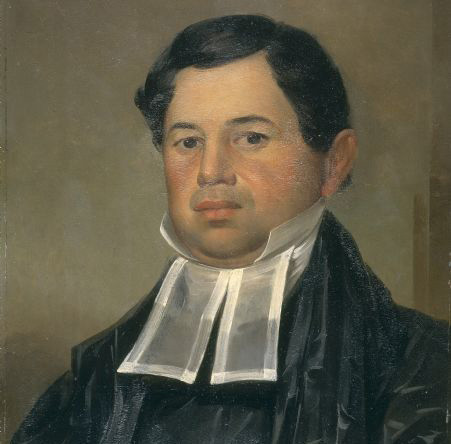 Photo Credit: The Wisconsin Historical Society, WHI 3021 | Eleazer Williams first thought he would be an Indian emperor, then made himself out to be a French prince. All while living in Wisconsin.

Eleazer Williams Was Determined to Be An Emperor
By Judith Siers-Poisson
Share:

As the saying goes, sometimes truth is stranger than fiction. And when taking a closer look at Wisconsin history, that often seems to be the case.

One of the real people who seems more like a flamboyant fictional character is Eleazer Williams. Erika Janik, a historian and the author of several books, including "Odd Wisconsin: Amusing, Perplexing, and Unlikely Stories from Wisconsin's Past," has made a study of Williams' life.

Born in Quebec, Williams grew up in New England and served as an interpreter for native tribes there. Williams then came to Wisconsin the 1830s with the Oneida and other tribes that were losing their land in the east due to expanding white settlement. Once in Wisconsin, Williams acted as an agent for the tribes, serving as a mediator, negotiator, interpreter and more.

Janik said it isn’t clear how much the tribes wanted or appreciated his efforts, but Williams thought highly of his own work. In fact, he convinced himself that once the lengthy negotiation wrapped up, the tribes would welcome him as their emperor.

Much to his surprise, Janik said, "It didn’t work that way. Once the negotiations were done, the Oneida said 'Thanks, but no thanks,' and sent Williams packing."

This might have been a setback to a less creative man. But as Janik explained, "In middle age, he came up with a new idea of how he could be an emperor."

This new scheme was to purport that he was the "long-lost son of Louis XVI and Marie Antoinette (of France), who’d been brought to America for safekeeping during the French Revolution," she said.

To further his story, Janik explained, "He actually tricked his mother into saying that he was adopted."

To lend credence to his claim, his started signing his letters "Louis, Dauphin." (As defined by the Merriam-Webster Dictionary, dauphin is the "title of the eldest son of a king of France, the heir apparent to the French crown.")

While it seems incredible that anyone would believe a story made up later in life, with no evidence to prove it, Williams was able to live off of the charity of his supporters for the rest of his life, Janik said. Perhaps. it isn’t that surprising when one considers the assessment that a fellow advocate for the tribes provided of Williams. Albert Ellis called Williams "the most perfect, adept at fraud, deceit, and intrigue that the world ever produced."

Besides writing books, Janik writes frequently for the Wisconsin Magazine of History and other publications. She is also a producer for the "Wisconsin Life" segments that air on both networks of Wisconsin Public Radio.