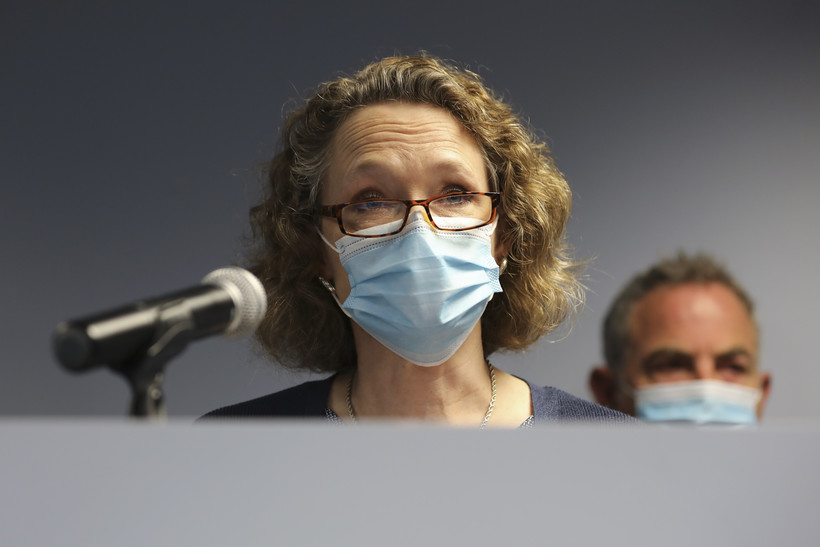 Department of Health Services Secretary-designee Karen Timberlake speaks before Gov. Tony Evers called on the Wisconsin Legislature to meet in special session to expand BadgerCare, the state's health care program for the poor, during a press conference at the Benevolent Specialist Project Free Clinic on May 19, 2021, in Middleton, Wis. Coburn Dukehart/Wisconsin Watch

Timberlake has been in the post since January 2021 and led COVID-19 vaccine distribution across the state
By Jenny Peek
Share:

Gov. Tony Evers made the announcement Friday, saying Timberlake's last day would be Jan. 2, the end of the governors' current term.

Timberlake joined DHS in January 2021 as the COVID-19 vaccine became widely available to Wisconsinites. Evers' statement said she joined the agency at a "critical time" during the pandemic.

"We owe her our gratitude for returning to this role during an incredibly challenging time for our state, and there’s no question that she helped us save lives," Evers stated.

Timberlake previously served as DHS secretary under former Gov. Jim Doyle during the 2009 H1N1 pandemic virus response. She took over for former DHS secretary-designee Andrea Palm who left for a job in President Joe Biden's administration in January 2021.

"This has been an extraordinary time to be in public service," Timberlake stated. "Thanks to Gov. Evers’ leadership and the creativity and dedicated efforts of our colleagues across the cabinet and throughout the agencies, Wisconsinites and communities are bouncing back from the effects of the COVID-19 pandemic, and the state’s future is full of potential waiting to be realized."

Like a number of other Evers appointments, Timberlake was never confirmed by the Republican-led state Legislature.

Timblerlake is the second member of Evers' cabinet to announce they will not be returning for his second term. Wisconsin Department of Natural Resources Secretary Preston Cole retired last month.

Evers has not named replacements for either post, according to The Associated Press.

The head of the Wisconsin Department of Natural Resources is retiring next week after Gov. Tony Evers named him to the post four years ago. Preston Cole has served as secretary of the DNR since Evers was sworn into office in 2019.