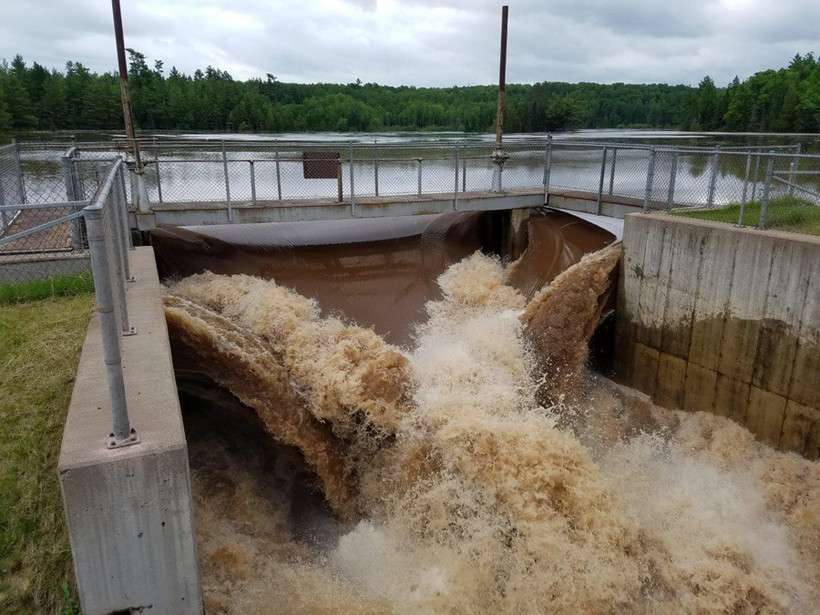 Portions of a dam washed out at Pattison State Park, south of Superior in June 2018 due to unusually heavy rainfall. Photo courtesy of the Wisconsin Department of Natural Resources

Parts of northern Wisconsin witnessed up to 15 inches of rain during Father’s Day weekend in 2018. The deluge caused severe flooding that washed out roads and bridges and caused more than $13 million in damage to public infrastructure, as well as the failure of several dams.

Three dams failed in Douglas County after heavy rains and flooding that weekend, including a dam on the Cranberry Creek Flowage.

"The water just kept swirling and eating away, eating away," said Jon Harris, the county’s forestry director. "Then, it finally just chiseled away at that stuff and the dikes completely failed and the water went around the concrete structure."

The dam, comprised of earthen dikes and concrete, was built about a half-century ago and one of eight to fail during severe storms and flooding in 2018. Since 2008, there have been 14 dams that have failed statewide, said Tanya Lourigan, state dam safety engineer with the Wisconsin Department of Natural Resources.

"There was a high number that failed in 2018," said Lourigan. "Those eight were subsequent to some very heavy rainfalls in those areas."

Nationwide, there were 1,688 high-hazard dams — dams where there’s a potential for property damage or loss of life downstream — rated in poor or unsatisfactory condition as of last year. Of them, six can be found in Wisconsin, according to the Associated Press and Wisconsin State Journal.

Lourigan said the state has roughly 4,700 dams, of which 920 are large dams regulated by the state. More frequent, intense storms have put more pressure on structures, some of which were built decades ago and not designed to handle such heavy rains.

Harris said Douglas County, which owns seven dams, decided to remove rather than repair the aging Cranberry Creek dam last year, noting a complete replacement would cost at least $175,000. He said the dam was originally constructed to provide wildlife habitat.

"It’s very costly to maintain dams in this day and age. I think the county just looked at the cost-benefit of that," said Harris. "Everyone knows in the county we have a lot of competing needs."

Now, Harris said they’re seeking financial assistance from the state to perform the less costly removal of the dam, hopefully sometime next year.

The DNR provides $4 million through grant programs for repair or removal of dams in Wisconsin. But Lourigan said funding has remained stagnant since 2008.

A Monroe County official told WPR’s "Newsmakers" program in October that the county was applying for a federal grant to study the Coon Creek watershed where three dams failed as the result of flooding last year.

"We’re going to look at the big picture. The structures were a solution for a long time. Do we need to go back to that when it’s going to cost us millions of dollars per structure and we have three of them to replace? Or are there other things we can do in the landscape to change that course of action when it comes to flooding?" said Bob Micheel, the county’s land conservation director in the interview.

Lourigan said Vernon and Monroe counties are stabilizing their sites to minimize erosion while working on the watershed plan.

"Those owners have been attentive to the dams," she said. "It’s not that they were listed in poor condition or had been neglected over a period of years."

The state inspects high-hazard and significant-hazard dams once every 10 years, but Lourigan said the DNR has the authority to conduct more frequent inspections as needed.