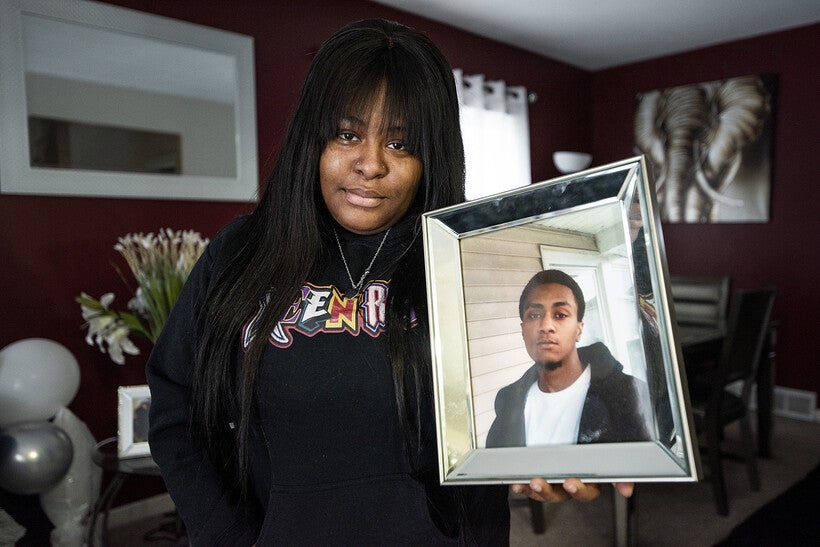 Kenosha resident Romonda Thomas holds a photo of her brother, Turando Long, who was killed in 2021. Angela Major/WPR

Experts say the reasons vary, from too many guns on the street to the effects of COVID-19 to human desperation
By Corrinne Hess
Share:

Long turned 28 on Feb. 14, 2021. For his birthday, his mom and sister gifted him new workout clothes and a pair of headphones, knowing he'd get good use out of them.

On Feb. 15, 2021, he put on the new jumpsuit and his headphones and headed out for a walk. Hours later he was found in the street outside a store on Kenosha's south side. He was dead, shot three times in the stomach.

"He always walked early in the day, never late at night, or anything like that, so he never worried about anything," said Thomas, 23.

Long's death was the first homicide in the city in 2021. Kenosha ended the year with 16 homicides, up from six in 2019. It's a trend that's reflected in statewide numbers, which show a 70 percent increase in homicides since 2019.

Wisconsin had 315 homicides last year, up from 185 in 2019, according to the state Department of Justice.

Law enforcement experts say the reasons for the ongoing increases in homicides vary from too many guns on the street to the ongoing effects of the COVID-19 pandemic to human desperation. 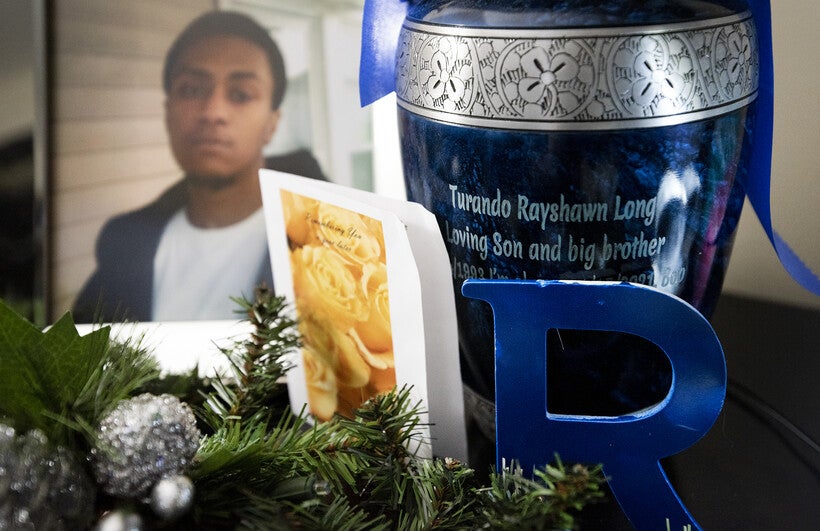 An urn and a photo of Turando Long are displayed on a table Thursday, Feb. 3, 2022, in Kenosha, Wis. Angela Major/WPR

In Long's case, Kenosha’s interim Police Chief Eric Larsen said it was one of mistaken identity.

Video surveillance from a nearby home showed Long leaving a convenience store near 61st Street and 22nd Avenue on Feb. 15, 2021, when three men sitting in a parked car called to him. Thomas said she believes her brother thought he was being asked for directions. Instead, at 9:15 a.m., he was shot.

No one has been charged in Long's murder, but the men believed to be responsible were from Illinois and were looking for someone else, according to Thomas. The suspected shooter was later killed in Illinois, Thomas said. Larsen confirmed that detail, but couldn't comment further because the case is still open.

Larsen said Kenosha has seen an increase in violence from people coming in from out of town. And in domestic violence cases, he said guns have become the fallback in arguments, leading to more deaths.

"We've seen that in many circumstances, whether it be taverns, arguments on the streets, all these situations, including some of the domestics," Larsen said.

Like Kenosha, Milwaukee County has also seen a staggering increase in homicides.

In 2021, Milwaukee County led the state with 202 homicides, nearly 100 more murders than in 2019. According to the Milwaukee Homicide Review Commission, 181 of the deaths in 2021 were by firearm.

And this year is already off to a deadly start. As of Monday, there were 40 homicides in Milwaukee. Last year it took until April 12 to get to 40 homicides, according to the Milwaukee County Medical Examiner's Office.

Some politicians, now in the throes of their own election campaigns, are using the statistics as talking points.

Acting Milwaukee Mayor Cavalier Johnson has asked the state for help. He would like to see a portion of the $2.9 billion budget surplus used to address Milwaukee’s unprecedented challenges with public safety.

"So they are sitting on a pretty handsome surplus of billions and billions of dollars, and so we are asking them to be the partner that we need, not just here but across the state," Johnson said.

But Gov. Tony Evers has said he's already invested $45 million in the state for public safety, $8 million of which went to Milwaukee. Evers pushed the issue to the Republican-led Legislature and called for an increase to shared revenue payments to municipalities — funding that helps cities invest in law enforcement, violence prevention and other basic city services.

"We’ve had great trouble with the Republicans getting shared revenue getting increased in the state," Evers said during a February interview with WPR's "The Morning Show." "That’s the money those municipalities use to do their work including fire and police protection."

Funding aside, University of Wisconsin-Milwaukee criminology professor Theodore Lentz said he's not surprised violence increased in 2020 and 2021. He said people feel like their needs aren’t being met, and they lack confidence in public safety — which are precursors to violence.

"We kind of had the perfect storm," Lentz said. "We had the COVID-19 pandemic, and when you couple that with the massive amount of social unrest that we had — the protests and additional incidents with police shootings — that just kinda kept that spark thriving."

Violent crime in the United States peaked in the 1990s. Criminologists aren't exactly sure why the crime wave of the 1990s slowed, and they don’t know what will make this spike in homicides go down, Lentz said.

"Violence is concentrated in a population of a certain subset of people," Lentz said, pointing to urban centers with high levels of poverty. "It’s thinking about who is at the highest risk for violence, and if we make some positive changes, are they part of that positive change?"

Back at the Thomas home, Long's memory lives on in photos scattered across the living room. The family's Christmas tree is still up — well into February. Thomas said her brother loved Christmas, so they kept the tree up through his Feb. 14 birthday.

"He came and wrapped all of our gifts, and then it was his birthday, so we’re holding onto that last piece of him," she said.

Like many people who have experienced violence firsthand, Long's death has reshaped how Thomas sees her hometown.

"We now know that we live in a world where you can’t go anywhere and be anywhere at any time," she said. "Because you can be walking down the street at 9 in the morning and be killed. You aren’t really safe."