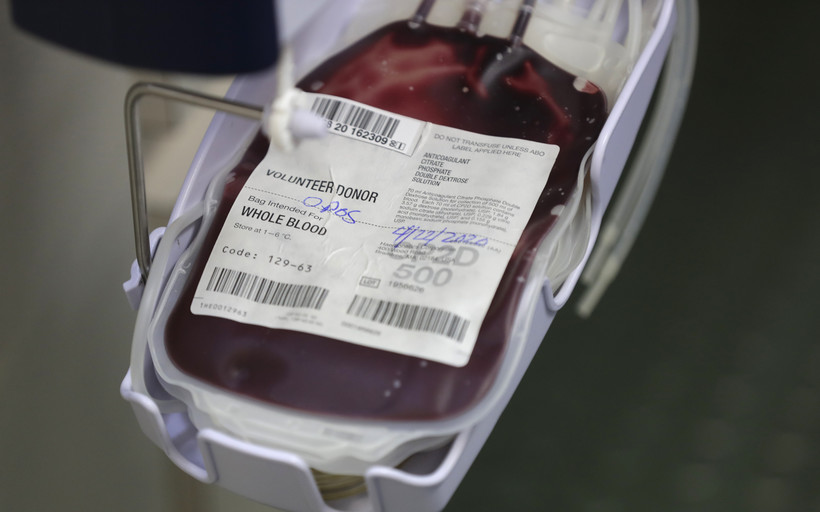 Donated blood fills into a collection bag aboard a OneBlood blood donation bus, Wednesday, April 22, 2020, in Miami. Due to the COVID-19 pandemic, thousands of blood donation sites have been closed and the need for blood is now critical. Wilfredo Lee/AP Photo

As Wisconsin residents get back to normal summer activities this year, blood donation centers in the state are reporting a shortage of blood.

Justin Kern, communications director for the American Red Cross of Wisconsin, said his organization usually sees a dip in appointments over the summer.

But he said part of 2020 was the exception. After blood drives were canceled last spring over concerns about COVID-19, more people began to donate starting in the summer because science surrounding how the disease spreads became clearer.

"As scary as it was at the start, it really ended up turning around and people also found it was the kind of thing they could do," Kern said. "People were looking for ways to give back."

With COVID-19 cases now at low levels across the state, Kern said his organization is seeing the usual summer decline right as the demand for blood is increasing. He said hospital systems are working through the backlog of elective surgeries put off during the pandemic and traumatic events such as car accidents and violent crime have increased.

"Those kinds of factors, all combining in the last few weeks here, have really kind of stripped down the supplies of blood that hospital partners have had," Kern said.

Nationally, the Red Cross is reporting a severe blood shortage. Kern said the organization needs to collect more than 1,000 additional blood donations per day across the country to meet the expected need.

In Wisconsin, that need is especially great in La Crosse, where donation appointments have fallen to concerning levels, and in the Milwaukee area, which tends to see more traumatic events and needs a larger supply of blood.

Kristin Paltzer is public relations manager for Versiti, a blood donation company with locations in Marshfield, La Crosse, and the Milwaukee area. Versiti’s blood supply has been down over the last year because it relies on mobile blood drives at schools, businesses and churches, she said.

"A school that would annually host a really wonderful large blood drive for us wasn’t necessarily able to because either they were remote or restrictions weren't allowing people inside the building," Paltzer said. "That has been a big issue and one of the main reasons why the blood supply is lower at the moment."

She said they are seeing more organizations signaling that they are open to once again hosting a drive. But the return of blood drives and improved supply likely won’t happen until the fall when the new school year starts and people continue to return to their offices.