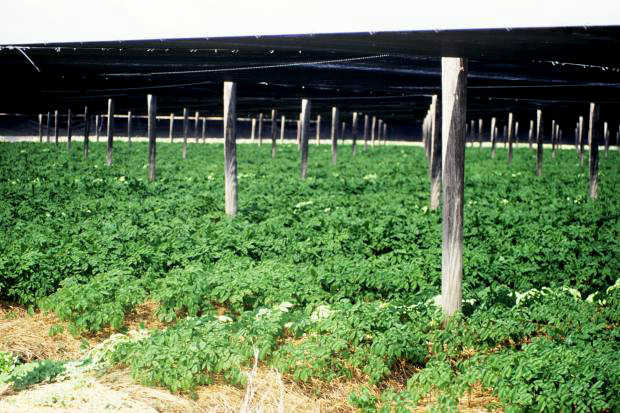 Wisconsin ginseng is grown almost exclusively in Marathon County, and the majority of its market is in Chinese exports. Wisconsin Department of Natural Resources (CC-BY-NC)

Wisconsin Ginseng Has Been Target Of Escalating China Tariffs
By Rob Mentzer
Share:

Wisconsin's ginseng growers say it's good news that the United States will freeze tariffs and reopen new trade talks with China, but it's too soon to say what the impact on Wisconsin's economy will be.

President Donald Trump on Saturday announced that trade talks will resume and said without providing specifics that China would purchase U.S. agricultural products. If that signals a winding down of trade tensions, it could mean relief for central Wisconsin ginseng farmers, who have been rocked by retaliatory tariffs in the escalating U.S.-China trade war of the last two years.

But that relief is still a long way away, cautioned Jackie Fett, executive director of the Ginseng Board of Wisconsin.

"There's still no end in sight," she said. "The talks could continue on for quite some time."

Ginseng exports are worth tens of millions per year to Wisconsin farmers. The crop is located almost exclusively in Marathon County, where climate and soil conditions support the cultivation of the root. Because the great majority of the crop is exported to China, these growers have been extremely vulnerable to Chinese tariffs. Fett said China has repeatedly targeted ginseng for new tariffs and that Chinese fees overall now add as much as 40 percent to the price.

And Chinese buyers aren't always willing to pay that increase. At a June panel discussion in Wausau, ginseng farmer Will Hsu said some buyers simply expect U.S. farmers to absorb the increase themselves, while keeping consumer prices stable.

Fett said Tuesday that members of the Ginseng Board are working with the U.S. trade team to make local farmers' voices heard.

"From our perspective, it's a good thing if we can just start talking again and hopefully that's what they're going to do, and hopefully they'll come up with a resolution that is beneficial for everybody," Fett said.

"Generally when we add additional tariffs, China retaliates," she said. "And every time they retaliate, ginseng is on the list."

Fett said the Ginseng Board will continue to advocate for Wisconsin farmers. Trump on Saturday tweeted about the trade negotiations, "I am in no hurry, but things look very good!"