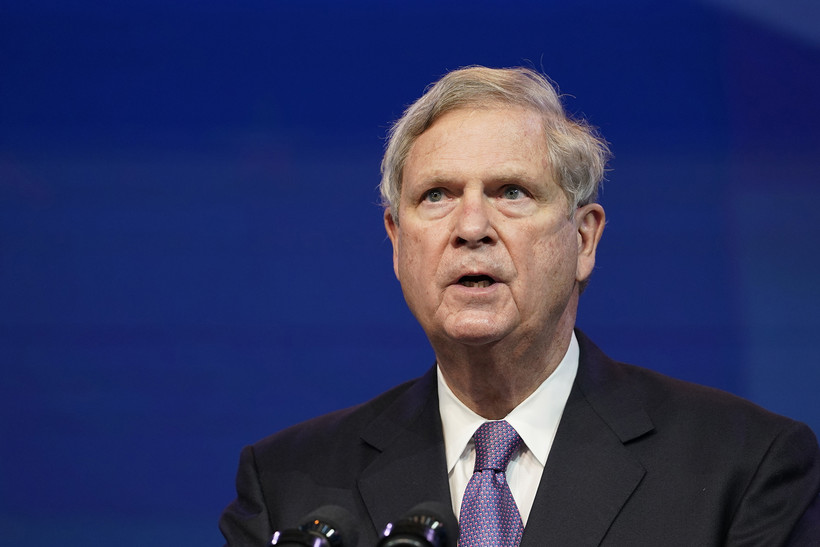 Former Agriculture Secretary Tom Vilsack, who the Biden administration chose to reprise that role, speaks during an event at The Queen theater in Wilmington, Del., Friday, Dec. 11, 2020. Susan Walsh/AP Photo

Wisconsin farm groups are largely applauding President-elect Joe Biden’s nomination of Tom Vilsack to once again head the U.S. Department of Agriculture. But some organizations caution the incoming administration will have to answer to disappointment from minority farmers and certain advocacy groups.

Vilsack was secretary of agriculture for eight years under the Obama administration and is a former governor of Iowa. Since 2017, he has served as president of the U.S. Dairy Export Council.

"That really gives him a keen understanding of the opportunities that dairy provides globally. So I think it would be a good fit for us," Trotter said.

Trotter said he thinks Vilsack’s nomination shows that the incoming Biden administration is looking to provide continuity for the USDA.

"We’re hopeful that the new administration will build on those strengths that we have with (the U.S.-Mexico-Canada Agreement) and really monitor that everything gets implemented correctively," Trotter said.

Jeff Lyon, general manager of FarmFirst Dairy Cooperative, also celebrated Vilsack’s nomination, saying he had the "ideal set of qualifications to advocate for the dairy industry."

"As the former governor of Iowa, Vilsack knows the economic importance of agriculture to the Upper Midwest. This personal knowledge will ensure that dairy farmers from the Upper Midwest will receive solid representation under Vilsack," Lyon said in a statement.

But Nick Levandofsky, government relations director for the Wisconsin Farmers Union, said Vilsack’s nomination came as a surprise to many farm groups given the attention shown to other candidates for the position, including former U.S. Sen. Heidi Heitkamp of North Dakota and Ohio U.S. Rep. Marcia Fudge. (Biden nominated Fudge to lead the Department of Housing and Urban Development.)

"It was a real mixed bag, so to speak, when it came to the possible candidates and diversity really led the way," Levendofsky said. "There were a lot of minority candidates, female candidates. And then to just go and select someone who has already been there and already done that I think caught a lot of people off guard."

Levendofsky said Vilsack is a "safe choice" and has support from Republicans in the U.S. Senate.

He said the former secretary has the experience needed to jump right into the job and has a strong history of working with groups like National Farmers Union and American Farm Bureau Federation.

But Levendofsky said many people in the Black farming community as well as food security advocates and environmental groups will still be disappointed that the administration didn’t choose a more progressive candidate or someone from a more diverse background.

He said the pandemic has also highlighted the importance of the Supplemental Nutrition Assistance Program and other federal nutrition programs that are housed under USDA.

"I think you’re going to see Secretary Vilsack evolve in a way and learn to talk to not just farmers and their organizations but also to groups that deal with food security and food systems, environmental groups and those others," Levendofsky said.

Levendofsky said he hopes part of that evolution comes in Vilsack’s thinking about the future of the dairy industry. He said the former secretary has previously voiced doubts about the viability of milk supply management, an idea that the Wisconsin Farmers Union and other progressive groups have embraced as small dairy farmers continue to struggle financially.

"There's going to be some areas where we’ll see some disagreement between other ag organizations when it comes to dairy policy and that. But I look forward to how we can sit down together, have a seat at the table and work these issues out," Levendofsky said.

American Farm Bureau President Zippy Duvall said in a written statement that he looks forward to working with Vilsack on the "strengths and weaknesses of our food system" revealed during the pandemic.

"Together, we must prepare to tackle a new farm bill and build on efforts to create a fair marketplace for U.S. agriculture to compete globally. It is essential we ensure climate policies respect farmers and remain market-based and voluntary. And, we must end the digital divide that puts rural America at a disadvantage," Duvall said in the statement. "Tom Vilsack earned a reputation for rising above partisanship to serve farmers and ranchers and I’m confident he’ll continue to do so."