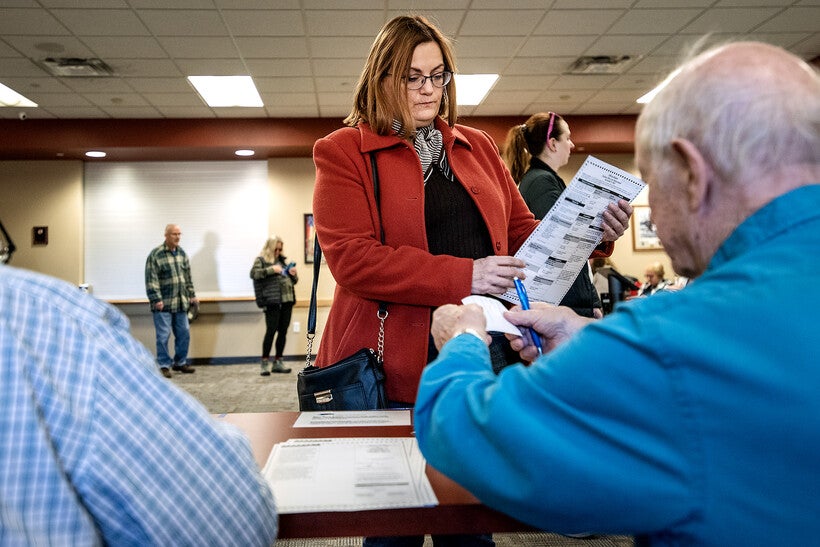 The Wisconsin Elections Commission is reporting only minor issues at polling places around the state as voters cast their ballots in tight races for Wisconsin’s governor and U.S. Senate.

"I’m really pleased to report that as of this afternoon there are no major issues that have been reported and Election Day in Wisconsin is going smoothly," said Elections Commission Administrator Meagan Wolfe Tuesday afternoon. "We had some very minor reports earlier today of lines at the polling places around the state. That’s not unusual."

Wolfe said other minor issues may include isolated incidents where the wrong ballots have been issued to voters in jurisdictions that straddle a county line or other districts and wards. The commission didn’t have any data available on voter turnout statewide, but Wolfe said they don’t expect low turnout this election.

While polling places were running smoothly across most of the state, a man armed with a knife temporarily halted voting in West Bend. The City of West Bend Police Department reported the man disrupted voting at a polling place at the West Bend Community Memorial Library. According to a statement from the police on social media, library staff called for help at about 12:35 p.m., reporting that the armed man demanded that they "stop the voting." Police said they took the 38-year-old man into custody, and said that while the incident is still under investigation, they expect charges are forthcoming. No further information was available on the man's identify or motivation.

Voting at the library was paused for about 30 minutes during the incident. No one was injured. The department's statement said they "would like to thank the library staff for taking quick action and voters who waited patiently to vote"

Election officials aren’t allowed to begin counting absentee ballots until 7 a.m. on Election Day. Officials in Milwaukee hope to wrap up counting those ballots between 11 p.m. and midnight.

"I'm told right now for today, for this election, they're processing between 80,000 and 90,000 absentee ballots," said Neil Albrecht, former executive director of the Milwaukee Election Commission.

Albrecht couldn’t give an exact figure as absentee ballots are still arriving. Even so, that’s about half the roughly 170,000 absentee ballots cast in the 2020 presidential election. Albrecht attributed the decline in absentee voting to people who are returning to polling places to cast their ballots as concerns over the COVID-19 pandemic have lessened.

He said they’re receiving reports of an "exceptional number" of election observers at polling places in Milwaukee. Some Republicans like U.S. Sen. Ron Johnson have raised concerns about election integrity.

The lawmaker’s critics and his opponent, Democratic Lt. Gov. Mandela Barnes, have attacked Johnson for text messages from his former chief of staff that indicate Johnson tried to deliver fake electoral ballots to former Vice President Mike Pence on Jan. 6.  That was just before a crowd of former President Donald Trump's supporters stormed the U.S. Capitol to stop the certification of President Joe Biden's victory in the 2020 election.

Albrecht said it’s been a "very relaxed" election so far in Milwaukee despite politically charged times.

"I don't think there is any industry with greater scrutiny or more under a microscope than elections, and I think there's a lot of rhetoric out there in terms of the integrity of elections. Yet, elections have been through recounts. Observers are present for every function of an election — not just the voting sites, but the central processing of absentee ballots," said Albrecht. "So, in terms of the integrity of elections, I would say the public should go with what is factual and not what is speculative or allegations or accusations."

Multiple court rulings, a partial recount, and a statewide canvas of election results have confirmed that Biden won in Wisconsin. A review of the 2020 election by the nonpartisan Legislative Audit Bureau found no evidence of widespread fraud.

A post on Twitter claimed one observer in Milwaukee took a picture of voters casting absentee ballots and confronted some voters. In Racine County, Republican Party Chair Ken Brown has been visiting polling places to measure the area where poll watchers are allowed, according to the Journal Times. Observers are allowed to be within 3-8 feet of where ballots are counted.

Wolfe said the commission had not received any reports of incidents related to election observers. Although, she said they’re aware of minor reports on social media of tense encounters at polling places.

"It sounds like in all those minor instances that we saw on social media, again, that weren't necessarily reported to our office, that the chief inspector was able to resolve those in an appropriate manner," said Wolfe. "We're not aware of any sort of major disturbances at any of our polling places."