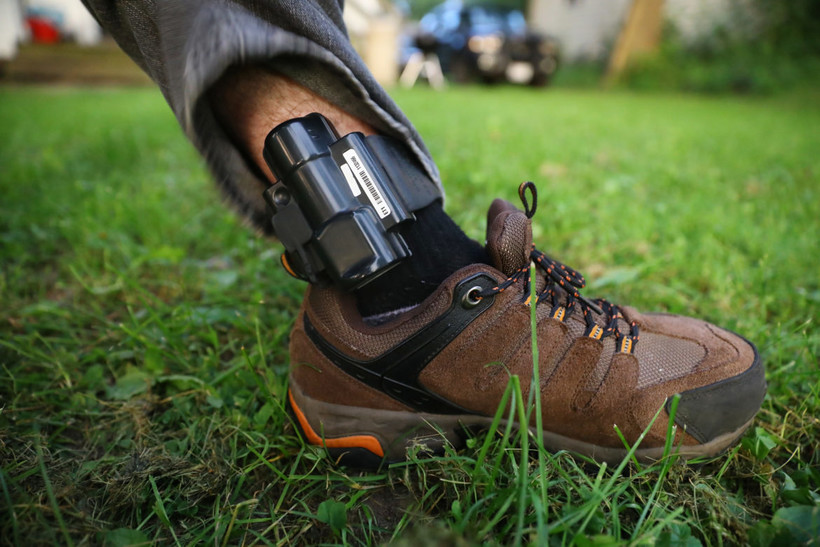 Cody McCormick, 29, shows the GPS monitoring device he is required to wear as a result of a sex-related conviction while living in Minnesota. Coburn Dukehart/Wisconsin Center for Investigative Journalism

Cody McCormick spent much of the past seven years incarcerated or on probation after being convicted of fourth-degree criminal sexual conduct in Minnesota.

Since he had his supervision transferred to his home state of Wisconsin in late 2016, McCormick has been repeatedly thrown in jail. He lost a job. And he continues to be disturbed by corrections officials calling him — sometimes in the middle of the night.

McCormick says these barriers to reintegrating into the community stem from a GPS ankle bracelet, which he was not required to wear in Minnesota but is required by Wisconsin to wear for life. As of January, Wisconsin monitored 1,258 offenders on GPS devices at an annual cost of about $9.7 million.

Five years after the Wisconsin Center for Investigative Journalism documented serious problems with the state’s GPS monitoring program for offenders — false alerts that have landed offenders in jail, disrupting family lives and causing them to lose jobs — inefficiencies and inaccuracies with the system remain, according to state and county records and 16 offenders interviewed for this story.

Such problems have led some law enforcement and other officials to doubt the program’s ability to ensure public safety and assist offenders in reintegrating into their communities.

Since the Center’s 2013 report, the cost of the program and the number of offenders under monitoring have roughly doubled. Lawmakers never followed through on calls to study the system in the wake of the Center’s report. State officials have been unable to produce records of any evaluation of the system’s reliability or effectiveness.

In this current report, the Center found numerous service requests and complaints related to bracelets failing to hold a charge. In February, a bipartisan group of lawmakers introduced a bill that would make it a felony for anyone on GPS monitoring to intentionally fail to charge his or her bracelet.

Offender: Problems From The Start

McCormick, 29, said his troubles with GPS monitoring began soon after being fitted with an ankle bracelet in February 2017. Records show the tracker made by Boulder, Colorado-based BI Inc. was not communicating with the state Department of Corrections’ Electronic Monitoring Center in Madison because of poor cellular reception at his grandmother’s house where he lived in rural Monroe County.

And even though police found him exactly where he was supposed to be, McCormick was taken to jail for about three days. As a result, he lost his job at his family’s restaurant.

Ten months later, McCormick was incarcerated again, this time for five days. Records from the Sparta Police Department show the arrest stemmed from McCormick allegedly being located next to a library — a zone off-limits for him — for an hour. McCormick said he only drove past it; his roommate, who was driving with him, affirmed this version of the incident.

McCormick’s difficulties persisted. This January, McCormick was briefly jailed on a warrant for allegedly tampering with the bracelet. A police report said McCormick showed them he had not tampered with it. He was later fitted with a new bracelet. Officials did not charge him with a crime — although tampering is a felony offense.

"It's not just the people who are on monitoring devices (who are affected)," McCormick said. "It's their family, their jobs, their social life." Cody McCormick, 29, outside his new rental apartment in Sparta, Wis., on Aug. 1, 2017. McCormick and his fiancé Breanna Kerssen had been living in the basement of his grandmother's rural home but moved into town to alleviate continuous difficulties with the GPS monitoring device. Coburn Dukehart/Wisconsin Center for Investigative Journalism

The Center reviewed data from a single month, May 2017, to more deeply explore the large volume of alerts being triggered by Wisconsin’s monitored offenders. In all, Wisconsin offenders in May generated more than 260,000 GPS alerts, 81,000 of which corrections officials sorted through manually.

Wisconsin’s problems are not unique. A 2017 examination by the University College London and Australian National University of 33 studies of electronic monitoring worldwide found widespread technological problems.

In 2012, California replaced half of the state’s ankle bracelets because of technical problems; Massachusetts replaced all 3,000 of its GPS bracelets in 2016, citing poor cell coverage.

Wisconsin DOC officials said the benefits of the program outweigh any technical drawbacks. DOC Spokesman Tristan Cook said the bracelets provide a "deterrent effect since offenders know they are being tracked."

BI Inc., which supplies the ankle bracelets and other monitoring equipment, declined to answer questions about reported problems with the technology.

Some experts say GPS monitoring can be a useful tool in providing structure, reducing recidivism, allowing offenders to work, and lowering costs compared to incarceration. But technological problems can get in the way of those benefits.

Mike Nellis, editor of the Journal of Offender Monitoring, which focuses on the use of monitoring technology to enhance public safety, said such problems can undercut the program. "To suddenly find yourself carted back to prison for something that is in no way your fault seems to me to be quite an unnecessary disruption in the life of an offender — and quite at odds with good practice in reintegrating them," Nellis said.

Cecelia Klingele, a University of Wisconsin-Madison associate law professor who specializes in correctional policy, said DOC is in a difficult position when it knows some, or even many, of the alerts it receives are caused by equipment malfunctions.

"Even short periods of jail are highly disruptive and can cause a person to lose his job, be unable to care for children, or even lose stable housing," Klingele said.

Some officials in law enforcement who deal with Wisconsin’s GPS program have seen false alerts firsthand and have reservations about the program.

Price County Sheriff Brian Schmidt recalled an incident in which he refused to detain a GPS-monitored offender with a warrant because it appeared to stem from a device malfunction.

"If … you find a gentleman in bed, and the monitor is failing, even though I have the (apprehension) request, I’m less likely to put that person in jail," Schmidt said.

DOC sees it another way. "There is no such thing as a 'false alert,'" Cook said. He said the law requires offenders to be taken into custody until such alerts can be resolved; DOC can have them jailed for up to three days to determine whether a violation occurred.

DOC records show it can take days or even weeks to locate errant offenders, especially if they are homeless or have removed their bracelets.

Recent studies show electronic monitoring combined with traditional parole methods and treatment could lower rates of arrests, convictions and returns to custody. But a University College London study speculates that any positive effects may be due to increased compliance with treatment programs, not the monitoring itself. Susan Turner, a professor of criminology, law and society at University of California-Irvine, argues such systems do not provide much benefit for the cost.

In a 2015 study on California’s GPS program that she co-authored, Turner found the system does reduce recidivism, but only for administrative violations such as failure to register as a sex offender, not for criminal sex and assault violations, where recidivism is already "very low."

"I think they (lawmakers) had the tail wagging the dog," Turner said. "They hadn't really thought through what exactly they hoped to accomplish by putting it on, other than just saying we got the GPS on the sex offender."

If found guilty of violating the terms of his monitoring, Morgan, 58, could be returned to prison for years. That prospect keeps him up at night.

"I could potentially never walk out," Morgan said as his daughter, Angela, and new wife, Rachel, listened beside him. James Morgan, center, with his wife Rachel and daughter Angela at his residence in Monona, Wis. Morgan, who spent 26 years in prison for sexual assault and other crimes, now wears a GPS ankle bracelet for life. He has been arrested several times due to GPS problems. Coburn Dukehart/Wisconsin Center for Investigative Journalism

"If I take this guy into custody, for this two-minute curfew violation, it’s going cost (the offender) his job, and he won’t be able to pay the victim his restitution, and it’s going to create an awful lot of hardships," Drake said. Steven Nichols, 48, at his apartment in Whitehall, Wis. Nichols is a registered sex offender, and on supervision and has been placed on lifetime GPS monitoring. Coburn Dukehart/Wisconsin Center for Investigative Journalism

The system’s ability to accurately locate offenders in rural areas, where cell service is poor, also can be spotty.

Several offenders told the Center they have received repeated phone calls from the monitoring center or their probation agents asking them to regain a signal or informing them they are located in places where offenders claim not to be.

David Bay, a sex offender on GPS from Ashland County, has been arrested three times on probation violations since 2013. He claimed the problem was with his monitoring bracelet. Bay, 69, of Glidden, said he faces days in jail if he strays too far from the beacon at his home.

Battery malfunctions are widely reported, according to DOC records. Of the 93 service requests submitted in May for battery problems, some were for batteries that failed to take a charge or drained within a few hours. BI Inc., the device manufacturer, advertises that its devices can hold a charge for up to 80 hours.

When GPS bracelets lose their charge prematurely, offenders who are outside of their homes must race to find a place to gain a charge, or face jail time.

"When they go dead, they go dead fast," said Steven Nichols, 48, of Whitehall. "I once charged it fully and drove to Eau Claire (a 50-minute drive), and it was beeping that the battery was dead."

Jason Wolford, a 37-year-old offender on lifetime GPS, said he has spent up to five hours sitting in one place to charge an older unit. GPS service requests show reports of charging taking up to seven hours. Offenders say new units charge in about 30 minutes.

On an early August evening with the summer sun setting behind them, McCormick, his fiancé Breanna Kerssen and a friend packed boxes of belongings into two aging Acura sedans and drove down a winding country road away from his grandmother’s house to an apartment in Sparta where McCormick hoped better cell reception would give him a life less interrupted by the corrections system.

"I was tired about getting phone calls (from the monitoring center)," McCormick said as he surveyed his new yard. "Here, I don’t have to worry about that as much."

McCormick’s optimism, it turns out, was misplaced. In addition to two more arrests since moving to Sparta, the monitoring center called McCormick in October when he came within half a block of a liquor store, which is one of his exclusion zones. Another time, he had to return home early from helping with his grandmother’s fall yard cleanup.

The monitoring center said it could not gain a signal.