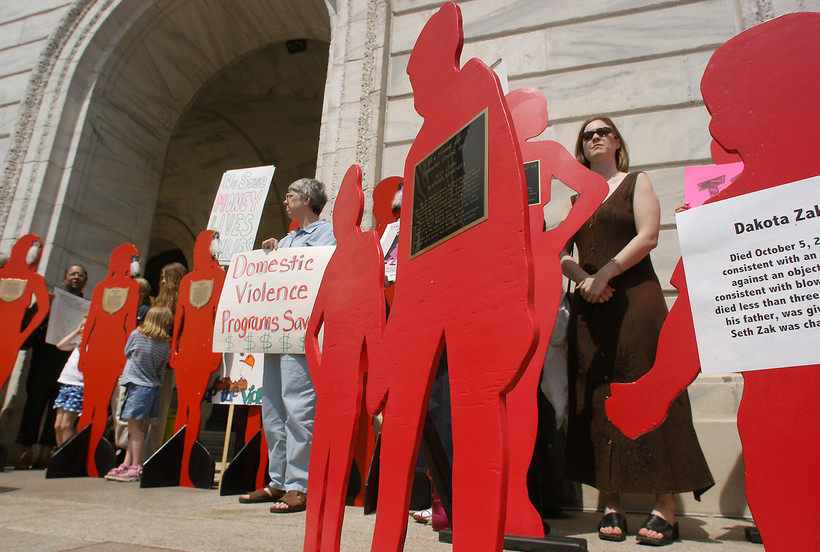 People hoping to save funding for domestic abuse programs gathered along with silhouettes representing women and children victims. The event was sponsored by the Minnesota Coalition for Battered Women and the Domestic Violence Legislative Alliance. Janet Hostetter/AP Photo

In Wisconsin, Domestic Violence Lead To 62 Deaths In 2017

Guns Used In More Domestic Violence Homicides Than All Other Means Combined Since 2005
By Shamane Mills
Share:

Domestic violence claimed 62 lives in Wisconsin last year, and guns were the most common way people killed their partners or themselves.

Since 2005, guns have been used in more domestic violence homicides than all other means combined such as stabbing, strangulation and vehicle trauma, according to a new report released by the group End Domestic Abuse. Eleven of those shootings in 2017 involved a gunman legally prohibited from owning a firearm.

"It is really hard right now to keep guns out of the hands of domestic abusers because there are so many loopholes," said End Domestic Abuse Wisconsin executive director Patti Seger.

On average, there was one death every six days from domestic violence in 2017. The victims were mostly women and ranged in age, with the oldest being 82 years old. Many occurred when the victim was planning to leave or had already left.

"Many times we often hear people say, 'Why doesn’t the victim just leave?' We recognize that leaving is often a critical trigger point that may result in homicide. We who advocate for victims of domestic violence very strongly call on communities to recognize the best decider of when its safest to leave is the victim," Seger said.

In 2016, the state had a total of 73 murders and suicides related to domestic violence, the most since End Domestic Abuse Wisconsin, a statewide coalition, started tracking domestic violence deaths in 2000.

"We must work to expand background checks," said Subeck, D-Madison, who, as a member of the council, advises the governor, state Legislature, and Department of Children and Families on issues related to domestic abuse policy and prevention funding.

"We have a loophole in our Wisconsin laws that allows individuals to purchase guns online through ads placed on websites or go to a gun show and purchase from a dealer who isn’t licensed or from an individual who isn’t licensed," said Subeck during a press conference at the state capitol Monday in which she also called for reinstating a 48-hour waiting period for gun purchases.

This past weekend Madison police say a man fatally shot a woman he was involved with before killing himself in a domestic violence murder-suicide.

Access to guns is one of 11 questions domestic violence advocates urge police to use to assess a victim’s risk of dying at the hands of their abuser.

Twenty-one of Wisconsin’s 72 counties use or are implementing the domestic violence lethality screening tool. One of them is Dunn County, where Menomonie Police Chief Eric Atkinson says it's helpful for first responders and victims.

"One of the things I like best about this is not only does it identify who is high risk but it allows us to get those persons in immediate contact with victim advocates so they can understand there is hope that there are resources in the community and there are people that care," said Atkinson.

Mining company moves ahead with plans to drill in northern Wisconsin
Federal judge dismisses Wisconsin lawsuit that sought to block Biden's student debt cancellation
Wisconsin tribe seeks to protect a historic site where company plans to mine for gold
Where does the 'Driftless Area' get its name? The history, boundaries of the southwest Wisconsin region
Wisconsin dairy leaders call on US Senate to fix labor shortages by changing immigration policy