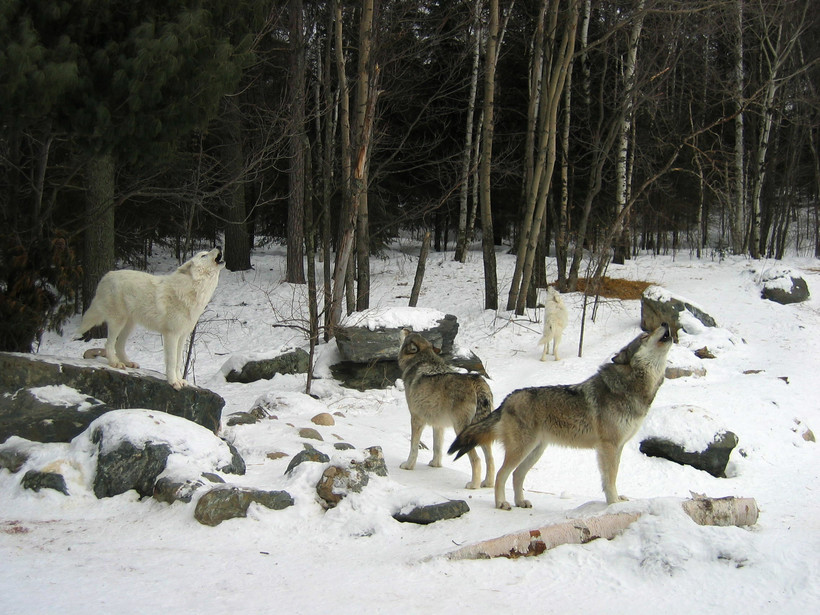 The Wisconsin Department of Natural Resources says it counted more than 1,000 wolves this winter, a 13 percent increase from the winter of 2018 to 2019.

A press release issued by the DNR on Thursday said department biologists, tribal biologists and more than 100 citizen volunteers noted an increase in the state's wolf population, which follows two years of "steady abundance" of the state's top predator.

A minimum count of between 1,034 and 1,057 wolves were recorded during last winter. Throughout the 2018-2019 winter season, a minimum of between 914 and 978 wolves were counted. The DNR also said the number of wolf packs detected by trackers and researchers grew from 243 to 256.

Adrian Wydeven is a retired DNR wolf biologist who now heads the Timberwolf Alliance advisory council. He told WPR that he still volunteers as a DNR wolf tracker and that he's not surprised that the overall population was higher this past winter compared to the two before.

"I know that the packs that I was monitoring number several that were larger than average," Wydeven said. "In fact, I was tracking one pack that had 12 or more wolves in it and (it was) the first time I've ever tracked a pack that big in my area."

The DNR said because of the increased size of the state's wolf population, it will begin using a new method to track it. Since 1979, the DNR has used what is called a "minimum count" to record wolf numbers, which is based on territory mapping, tracking, aerial observations and data recorded by radio and GPS tracking collars.

Now, the DNR is moving toward a new method for counting wolves known as "occupancy modeling," which uses average pack and pack territory sizes to estimate the state's population.

"Unlike the territory mapping method, occupancy models do not require that every pack’s territory be fully mapped or that every wolf in a pack be counted," said the release. "Similar to the population modeling tools used for other species, the wolf occupancy model uses statistical tools to estimate likely population levels in areas of the state where data may be lacking."

Wydeven said a minimum count makes sense for keeping track of smaller populations and was useful in the 1980s and 1990s when the populations were a fraction of what they are now.

"But as the populations start to get the higher, and they're spreading out across the landscape and there's more overlap between territories continue, the minimum count becomes more difficult and more challenging," he said.