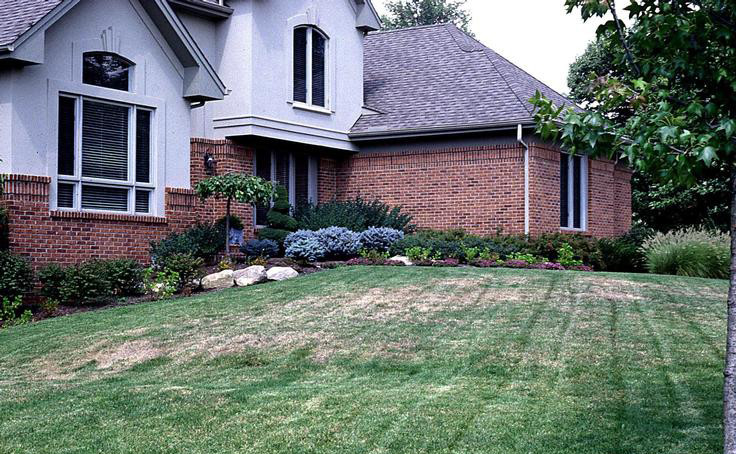 Lawn that's been damaged by chinches have brown spots where the pests have killed the grass. Photo courtesy of David Shetlar, The Ohio State University, Bugwood.org.

Wisconsin could have been the Wheat State, if not for a microscopic pest.

Black-and-white chinch bugs, which are just longer than an eighth of an inch, are known grass eaters who leave brown, crispy remnants of once-manicured lawns. The troublemakers aren't new to the state.

Chinch bugs ran rampant in the mid-to-late 1800s, compounding the frustrations of wheat farmers who eventually turned to dairy farming — an industry not nearly as hospitable to the pests.

P.J. Liesch, who manages the University of Wisconsin-Madison Insect Diagnostic Lab, said chinch bugs prefer dry conditions, and thrived in the drought periods of the 1860s, 1870s and 1880s.

While Wisconsin began as one of the top wheat producers in the country, chinch bugs took advantage of the wheat crops and decimated production year after year.

"They were ungodly abundant," Liesch said.  "They were so small, but you had millions and billions of them that they took out the wheat crop again and again."

Chinch bugs aren't all to thank or to blame. That period in Wisconsin saw falling wheat prices, market volatility and overworked soil, Liesch explained, all of which could have turned farmers off to the idea of wheat farming. Still, the bugs likely played a role in the state's agricultural redirect, Liesch said.

"Using needle-like mouthparts, these insects sucked the life out of wheat plants, leaving behind wilted, yellowed stems," Liesch wrote in a post titled, "Chinch Bug: How a tiny insect helped the rise of dairy in Wisconsin."

In addition to wheat, chinch bugs like corn, grass crops and wild grass, according to UW-Extension.

"The farmers said, 'Let's try some of these other crops,'" Liesch said about 19th-century Wisconsin farmers looking for alternatives to wheat farming. "This little tiny insect played a role in kind of shifting agriculture in the state from growing a lot of wheat to being the Dairy State."

Chinch bugs are hard to see because of their size, but adults can be identified by their reddish-colored legs and wings across their backs.

The bugs mate when it gets to about 70 degrees Fahrenheit, and females can lay up to 400 eggs within about a month, according to UW-Extension. It'll take another month or month and a half before those nymphs mature.

Natural predators of the bug include spiders and big-eyed bugs. Wet weather that fosters growth of a fungus also helps control the population.