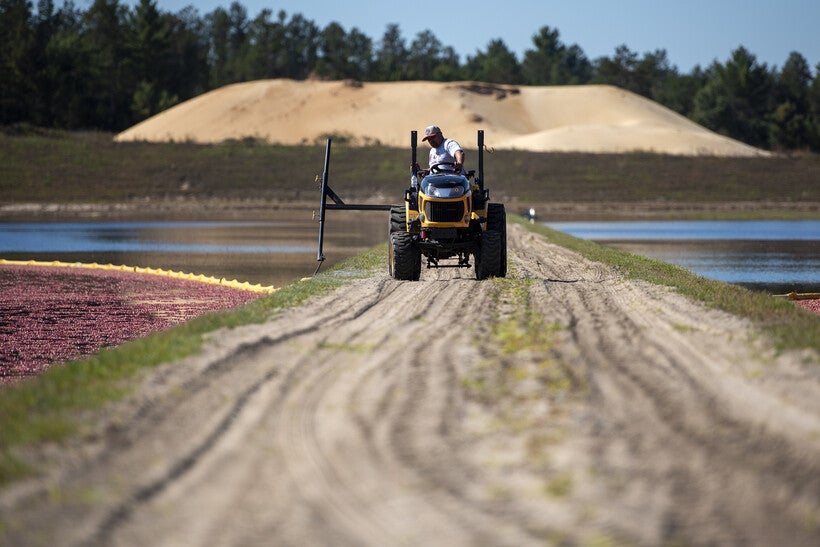 A barrier attached to a tractor is pushed forward to keep cranberries in place Monday, Sept. 27, 2021, at the Wisconsin Cranberry Research Station in Black River Falls, Wis. Angela Major/WPR

Wisconsin companies and farmer groups applaud the end of trade dispute between US, EU

Wisconsin motorcycles, cranberries have faced 25 percent tariffs from the European Union in response to Trump-era tariffs on steel and aluminum
By Hope Kirwan
Share:

Wisconsin agricultural and manufacturing companies applauded the news that the United States had reached a trade agreement with the European Union that would end retaliatory tariffs on American goods.

President Joe Biden’s administration announced Saturday it had reached a deal to reduce tariffs on European steel and aluminum that were put in place by former President Donald Trump in 2018. The deal means the EU will cancel tariffs it had placed on U.S. goods, including cranberries, motorcycles and some dairy products produced in Wisconsin.

Tom Lochner is executive director of the Wisconsin Cranberry Growers Association. He said the 25 percent tariff on American cranberry concentrate has hurt Wisconsin producers’ ability to compete with Canadians in the EU, which is the largest market for U.S. cranberries.

Lochner said the industry is also relieved the new agreement was reached before a 25 percent tariff on dried cranberries could be added in December.

"When you’re looking at a difference in price of 25 percent, it becomes a little more difficult to compete in that marketplace. Because in order to be price competitive, the 25 percent comes out of the margins that we’re selling fruit on there and it becomes less profitable to sell fruit into the EU," Lochner said.

He said cranberry growers have also felt the ripple effects of fewer imports of European aluminum into the U.S. and how it’s affected other supply chains.

"A lot of things on the marshes in terms of equipment, water control structures and other equipment are fabricated out of aluminum. So we saw increases in prices and also a challenge in availability," Lochner said.

Lochner said some processors also struggled with finding the aluminum cans they need to package cranberry products. He said one company in Wisconsin told him this summer that their American can supplier was unable to fill their orders and they were forced to switch to a supplier out of the country.

"They paid a higher price. My understanding is the cans were in a metric size rather than in a size that we use in the U.S., so that required some changes to their packing lines and things like that," Lochner said. "Those subtle costs impact our ability to get product out into the market and to do it in a profitable way without seeing price increases to the consumer."

Milwaukee-based motorcycle company Harley-Davidson Inc. put out a statement Saturday thanking the Biden administration for reaching a solution with the EU, calling it a "big win" for the company and its dealers in Europe.

"We are excited that this brings an end to a conflict that was not of our making, and in which Harley-Davidson had no place. This is an important course correction in U.S.-EU trade relations, that will allow us to further Harley-Davidson's position as the most desirable motorcycle brand in the world," said President and CEO Jochen Zeitz in the statement.

Tyler Wenzlaff, director of government relations for the Wisconsin Farm Bureau, said the end of the multi-year trade dispute will also likely have a broader positive impact on ag prices.

For example, Wenzlaff said Wisconsin farmers don’t export much of their corn, but they will still benefit from an uptick in corn sales and prices that comes from increased exports.

"Whenever you get into an economic struggle between countries, it’s really the producers that bear the brunt of it. And we’ve seen that not only with the EU, but also with China and soybean markets," Wenzlaff said.

He said the Farm Bureau is hopeful reaching a deal with the EU will give the Biden administration the momentum it needs to finally settle those other trade disputes around the globe.

"With COVID closing down schools and restaurants, the addition of tariffs have had a one-two punch to our producers in the state," Wenzlaff said. "With the slow growth back to normalcy that we’ve seen, with the opening of markets and then with this (trade deal), we’re hoping that with each new announcement that we can start to move back to the market that we saw previously."