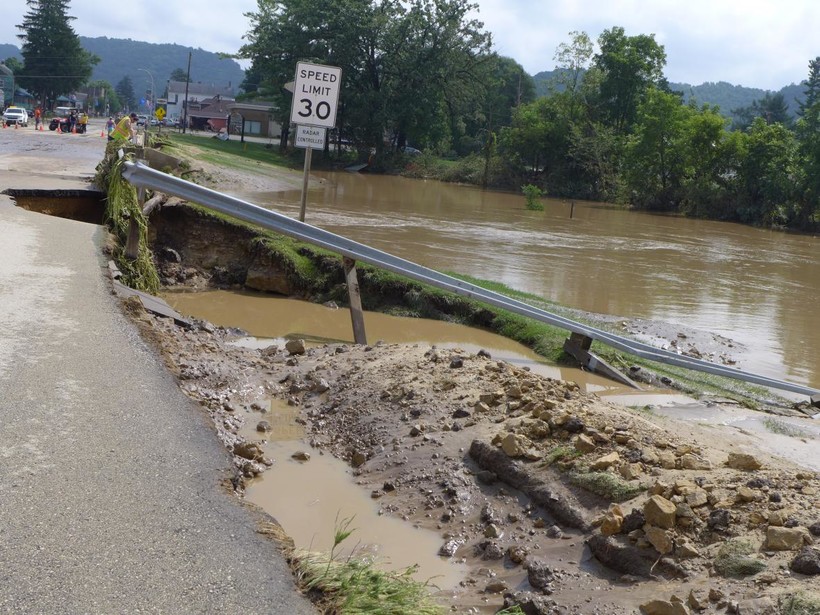 The county submitted the formal estimate Wednesday to Wisconsin Emergency Management. Officials estimate residential damage, including five destroyed homes, is more than $78 million. Public sector damage is estimated at more than $39 million, including $10 million worth of expenses to public utilities.

The county has continued to deal with high water since heavy rains first impacted the area more than two weeks ago.

Highways remained closed due to flooding in about half a dozen counties in southwest and south-central Wisconsin, forcing many school districts to cancel classes.

Westby Area Schools Superintendent Steve Michaels said the district did not feel it was safe for buses to operate given the large number of road closures in Vernon County.

"In rural areas like ours, there are more cancellations out here just because of the geographic area. You know, we have 400 miles of roads in our district," Michaels said.

Michaels said the district has already built in extra days to the school calendar so the cancellation won’t impact the rest of the year.

If roads are repaired, the district hopes to have their first day of classes Thursday. Michaels said teachers are preparing to help students deal with the trauma they’ve experienced over the last two weeks.

"All it takes is another rainfall, if they've experienced a flood, for their mind to immediately go to, 'Is my home OK? Are we going to have another flood?' I mean, they’re very typical responses that a student who has endured a flood might have, and it's something that we need to be careful to be sensitive to," Michaels said.

He said he hopes the start of classes will bring back a more normal routine for students and their families.

"They did repair roads of course last week and some of them washed out again, probably worse than ever," Nederlo said.

She said part of the Village of Viola was without power and several families are still displaced due to high water or irreparable flood damage to their homes.

Nederlo encouraged residents to continue to document and report damage to the county so officials can apply for federal disaster aid. But she warned homeowners to be on the lookout for scammers. Nederlo said one resident reported two people come to their house, claiming to be with the Federal Emergency Management Agency.

"They came to a residence and approached this person and wanted to buy the house and said they were from FEMA. Well, FEMA is not here in our county and we can’t emphasize that enough," Nederlo said

Communities along the Baraboo River in Sauk County have faced more high water this week.

"We had to pull the teams out because it was just too dangerous," Jelinek said. "The water was starting to come up and we didn't want our people getting trapped because the roads were getting closed. So, all of our resources have been put into just taking care of mitigating and trying to help out."

The river is expected to rise higher than it did last week but Jelinek said many water level gauges have been washed away. The National Weather Service issued a flood warning for residents living near the Baraboo, Rock, Fox, Crawfish, Pecatonica and Sugar rivers.

Quite a few rivers either flooding now or expected to flood the next 24 hours. You can always get the latest river observations and forecasts right here: https://t.co/ReHk1ij3qg pic.twitter.com/aopMx8MAWp

People are sandbagging areas in hopes of preventing further evacuations, Jelinek said Wednesday morning. There are no shelters open, but he said they have hotel vouchers for people who need to leave their homes.

"I just feel so sorry for our residents. I really, really do. ...I mean, they've just already gone through a traumatic experience and now they're getting hit again. It's relentless. It's just sad," Jelinek said. "We're trying to do everything we possibly can to support them, but that's just still not enough."

"We were starting to go into a recovery part, and now we're back to response," Jelinek said. "So all of our resources have been put into just taking care of mitigating and trying to help out residents as much as possible before the waters rise again. We're being told that it's supposed to go higher than last week."

The American Red Cross has opened a shelter at the Richland Center Community Building.

Gov. Scott Walker declared a statewide state of emergency last week in response to flooding in areas of southwest Wisconsin and Dane County, which is still seeing record high water levels in some of its lakes and rivers.

Wow! Past 3 wks worth of rain has been devastating for much of Wisconsin. This is about 300-500% of "normal." #wiwx pic.twitter.com/FgkhSJhvlV

The weather service is predicting a dry and cool end to the week with the same dry weather through the weekend.

Editor's note: Hannah Haynes and Hope Kirwan contributed reporting to this story. This story was last updated at 3:53 p.m. Wednesday, Sept. 5, 2018, with information on Vernon and Dane counties.