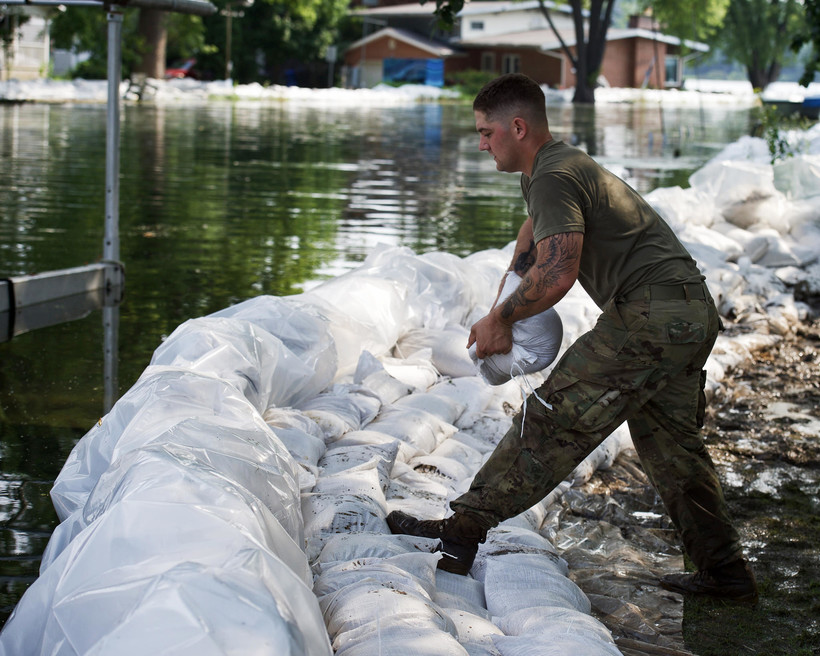 Rising water on the Baraboo River forced evacuations in Sauk County overnight and into Thursday morning as southern Wisconsin continued to feel the effects of days of heavy rains and flooding.

Sauk County Emergency Management Director Jeff Jelinek said about 12 people had to leave their homes in the village of Rock Springs.

"Right now, we've just concluded our evacuations. We brought in the Wisconsin Ducks, along with a couple mutual aid fire departments with boats to get people out that were trapped," Jelinek said Thursday morning. "The water came up very quickly overnight, much quicker than it was anticipated or had been forecast."

Jelinek said officials were going to door to door Thursday morning in North Freedom as the water continues to rise and flood homes. The county's emergency management agency anticipates seeing high water in the Baraboo area by Friday morning and was working on a plan Wednesday for potential evacuations in the area.

"So the river comes through Rock Springs, then next stop is North Freedom and then Baraboo. So we’re expecting water to crest in Rock Springs later this afternoon at 26.5 feet which is about two feet below what we had in 2008," Jelinek said.

A flood wave is moving down the Baraboo River. Residents in #RockSprings #NorthFreedom #Baraboo be prepared for rising water in areas near the river. Forecasts here: https://t.co/X114wM57i5 #swiwx pic.twitter.com/YDNrbWJSCM

Elsewhere in the state, residents are continuing to clean up damage, both from flooding and powerful storms.

Tom Spalj said he was nearly caught up in the floodwaters as he drove through Reedsburg to see if he could help with sandbagging.

"I was in Reedsburg yesterday when (the river) crested and the water came over the top of the main bridge there and then we snuck down through Rock Springs and almost got trapped there because the water was rising really quickly," Spalj, who is from Osage Beach, Missouri, said.

Spalj was in Reedsburg around 4:30 p.m. Wednesday afternoon.

Kathy Heath lives three miles outside of Baraboo, where floodwaters are expected to rise Friday. She got an early taste of what's come; water had flooded her basement.

"We've lived there six years and I've never seen a pond in our lower field and that's when I knew, wow, we got a lot of water," Heath said.

Sandbagging in the area is currently underway and a shelter is open for those needing to evacuate in Baraboo at 505 Broadway.

The National Weather Service said at least eight tornadoes touched down in Wisconsin as storms rolled through the state Tuesday into Wednesday.

Weather service meteorologist Mark Gehring said six of those tornadoes were in Fond du Lac County. Gehring said the agency is still surveying damage and the number of tornadoes confirmed will likely increase. Meteorologist Ben Miller in Sullivan said while additional tornadoes haven't been confirmed by ground crews yet, they know more touched down.

"We didn’t survey anywhere close to the entire area," Miller said Thursday. "We have two video confirmations of two more that weren’t documented yesterday and a ground crew’s report from the (Emergency Manager) in Green Lake County that we didn’t get to yesterday. So, that’s three right there but there will be more than three more."

Miller said a severe thunderstorm spawning eight or more tornadoes in one night is unusual but not unprecedented.

"It’s a certain type of storm that lends itself to being a prolific, generally weak, short-lived, tornado producer," said Miller. "They have circulations that they quickly set up and fade away. They’re on the ground for sometimes less than a mile but usually not more than five or 10 miles."

The storm also created widespread straight line wind damage with wind speeds estimated between 60 and more than 100 mph. The National Weather Service has four ground crews surveying storm damage around the region Thursday. Miller said they hope to finish their work by Friday.

Despite a day of quieter weather Wednesday, flood warnings remain in effect for the Milwaukee River in Ozaukee County, the Crawfish River at Milford, the Rock River at Waupun, the Wisconsin River at Portage, the Baraboo River in Sauk County and the La Crosse River in La Crosse County.

Gov. Scott Walker declared a statewide state of emergency Wednesday, calling for all state agencies to assist in responding to the floods and allowing elements of the Wisconsin National Guard to be placed on active duty to assist local authorities.