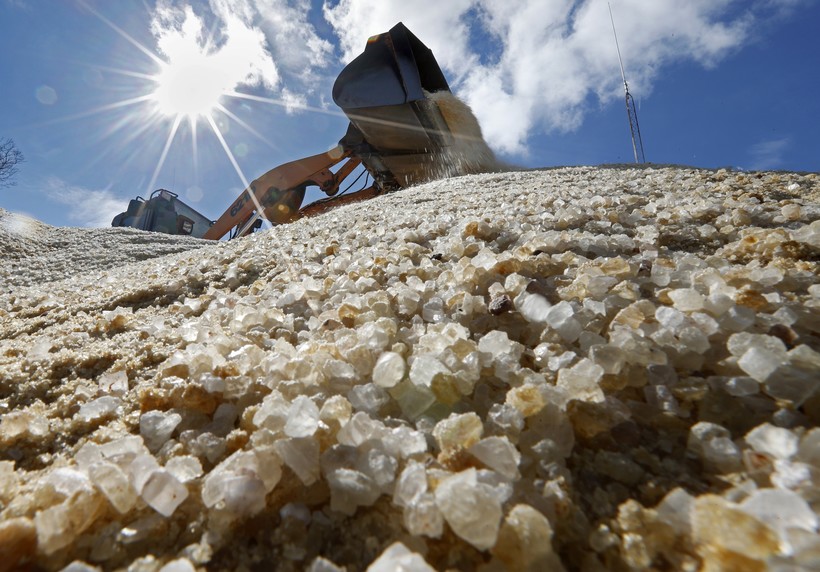 In this March 12, 2018 photo, road salt is mixed by a front-end loader prior to loading onto public works trucks in Freeport, Maine. Budget-busting road salt prices are leaving local officials hoping for a mild winter. Robert F. Bukaty/AP Photo

Southeastern Wisconsin has seen a mild winter. But it’s only January, and Wisconsin communities are preparing by looking at alternatives to road salt.

While salt has been an effective way to melt ice on roads and sidewalks, as little as one teaspoon permanently pollutes five gallons of water, according to the state Department of Natural Resources.

That salt goes into ground water, rivers and Lake Michigan, according to the DNR.

"Salt that we see on the roads in the winter, doesn’t just disappear," said Amy Barrilleaux, spokesperson for the Madison Water Utility and a member of Wisconsin Salt Wise, a Dane County-based advocacy group. "All that salt we’ve been putting down since the 1950s in Wisconsin is with us. So anything we can do to take a step toward getting control of that, is really important."

Brine keeps snow from sticking to the road, and in the end, uses much less sodium chloride. Brine also keeps snow and ice from binding to the pavement so it’s easier to plow, and it’s more targeted than dropping rock salt.

During the 2013-2014 season, the city of Cudahy used 17.8 tons of salt per snow event, according to a case study by the DNR. For the 2016-2017 season, the city applied brine to all streets, parking lots and city-maintained sidewalks.

Cudahy is about 5 square miles with a population of 18,600 people.

Oak Creek Mayor Dan Bukiewicz said he’s hoping the equipment pays for itself in two to three years, since brine reduces salt use by about 33 percent.

"This has been a proven system, not just on the south shore, but throughout Wisconsin, so it really looks like this could be the answer, at least short term to reduce the environmental impact to streams and rivers," Bukiewicz said.

The city of Milwaukee has considered an alternative to salt, but cannot agree on a solution, said Alder Robert Bauman, who chairs the public works committee.

"The big issue is cost," Bauman said. "Salt is inexpensive. I have argued we should look at the full cost of salt use — including corrosion and pollution, to no avail."

Barrilleaux said while there is a lot of talk about roads, about half of the salt used is spread on parking lots, sidewalks and driveways. Barrilleaux said sand is a much better alternative.

"We’ve been working very hard to educate both public and private winter maintenance crews about how to avoid salt overuse," Barrilleaux said. "If you walk around a parking lot in the winter and it is white with salt, that is much more than is needed for ice."