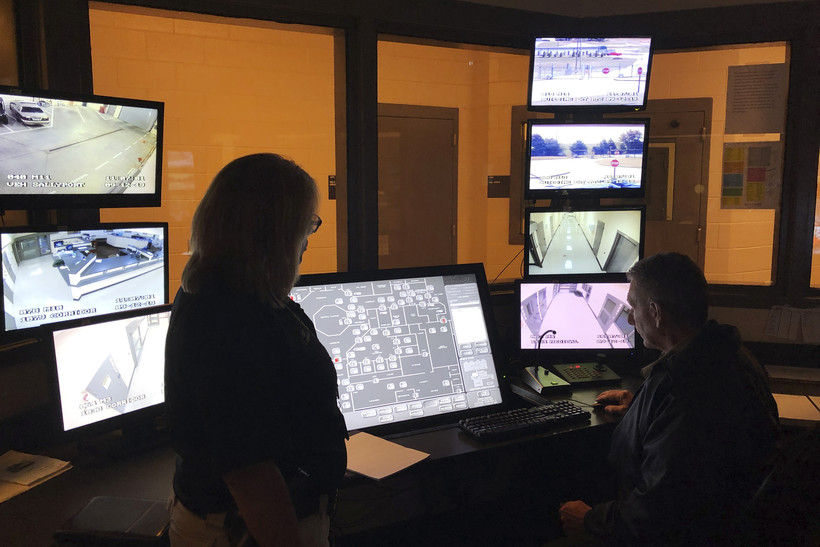 In this Sept. 12, 2019 photo, County Sheriff Janis Mangum stands in a control room at the county jail, in Jefferson, Ga. A ransomware attack in March took down the office's computer system, forcing deputies to handwrite incident reports and arrest bookings. Sudhin Thanawala/AP Photo

Two Wisconsin cities are still recovering after they were hit with ransomware in January, and one state official predicts those kinds of attacks will only get worse in the future.

Ransomware is a kind of cyberattack that locks governments or companies out of their data, usually demanding money in exchange for access. It often enters a system through phishing emails, which contain a shady link or attachment.

Ransomware shut down internal computer systems, like email, in Oshkosh and Racine on Jan. 28 and Jan. 31, respectively.

Oshkosh city spokesperson Emily Springstroh said the city is mostly back online, but they don’t know yet how the virus got in.

"You lock your house, you lock your windows, and all it takes is one cracked window," she said. "And so, it seems that that was kind of the situation here in Oshkosh."

Although it was a ransomware attack, the city didn’t receive a request for a ransom, Springstroh said. When the FBI and state officials came to investigate the attack, the city was told the hackers appeared to be members of a well-known Russian group, she said.

Both Oshkosh and Racine had recent backups of their data, meaning they’ll only lose some files, according to city spokespeople.

Wisconsin’s chief information officer, David Cagigal, said his team of about 70 volunteers has helped more than 40 local governments recover from cyberattacks. But that’s only the number of governments that go to the state asking for help.

Cyberattacks are common, and local governments are a relatively easy target, Cagigal said.

"Local government doesn't have the funding or the skill sets to be able to provide adequate protection as we do for the state," he said.

Part of the problem is the huge demand for cyber professionals and the difficulty of hiring them, especially in rural areas, Cagigal said.

Cagigal predicted a future where hackers are smarter and make more successful attacks.

Recovery from cyberattacks can be expensive. The estimated cost of a ransomware attack in Atlanta went up to $17 million, according to the Atlanta Journal-Constitution.

It’s important — and cheaper — for local governments to take precautions, Cagigal said. Counties and municipalities can make backups like Racine and Oshkosh did, so they don’t have to pay a ransom to get their data back. They can make stronger passwords and update their software.

Cybersecurity is also an issue for Wisconsin’s upcoming primaries, since the state was targeted by Russian hackers before the 2016 election.

Election officials and security experts formed a council that is working to beef up Wisconsin’s election security.

The Wisconsin Elections Commission also offered funding to local governments to update their computers’ operating systems or buy new ones in anticipation of upcoming state primaries.