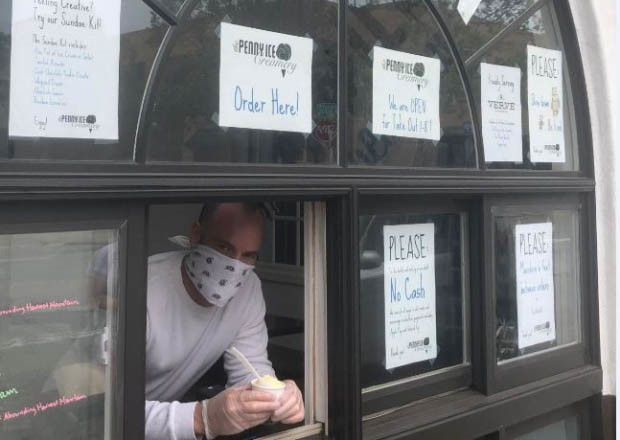 In this April 17, 2020, photo, Zachary Davis poses for a photo at The Penny Ice Creamery in Santa Cruz, Calif. Davis, who had to lay off 70 workers, is frustrated that big companies and ones with questionable records received precious financial aid through the federal Paycheck Protection Program. Martha Mendoza/AP Photo

In early April, Clark Kaufmann contacted U.S. Bank to let them know he wanted to apply for a loan through the federal Paycheck Protection Program.

Kaufmann has owned Clark Graphics, on Milwaukee’s east side, since 1982. He has been a long-time customer of the bank and didn’t think getting a loan would be an issue.

But it was. And Kaufmann watched as large companies, including Shake Shack and Potbelly, received loans.

"I didn't get to apply until April 13, and that was the day the program shut down, the money was all gone," Kaufmann said.  "I have two shareholders and seven employees. I guess I was pushed to the bottom."

The $349 billion Paycheck Protection Program, which began to boost small businesses during the coronavirus economic crisis, ran out of money in 10 days. Last week, Congress approved and President Donald Trump signed off on an additional $484 billion in coronavirus relief efforts, which included $321 billion more for the Paycheck Protection Program.

During the first round of the program, about 40,000 small businesses (with fewer than 500 employees) in Wisconsin received a total of $8 billion, said Rob Scott, the regional administrator of the Small Business Administration in the state.

Scott said he doesn’t know how much money will come into Wisconsin during the second round of the program but anticipates it will be similar to the first round.

Because the program is first come, first serve, Scott said it's important for business owners to submit their application as soon as possible.

"If a small business owner or nonprofit wants to apply, they need to go to their local lender and they need to do it now," Scott said. "We’re looking at the funds being extinguished by possibly this week."

Scott said while large franchises received funds during the first round of the program, guidance was released within the last 48 hours specifying if a business has access to capital elsewhere, they shouldn't apply to the program.

"And also there was guidance issued for those that did get the (money) and they were publicly-traded companies, then the spirit of the law wasn’t for them and they need to return the funds by next week," Scott said.

That money could be reallocated to the second round of funding, Scott said.

Kaufmann, the Milwaukee graphics company owner, had his loan application ready to be submitted Monday morning, the first day small business owners could apply. He said he's optimistic he'll get a loan this time, but he said the government should be doing more for business owners during the pandemic.

"I think they are missing the boat on this," he said. "It should be more than a two-month program. I don’t think my business is going to get anywhere back to where it was before in the next two months."

Clark Graphics is a copy shop that specializes in producing promotional materials for nonprofits, schools and events. It's considered an essential business, but the store is closed. Customers can call in orders and pick them up curbside.

Kaufmann said business has declined at least 50 percent since the end of February. Kaufmann is eligible for a $79,000 PPP loan — the national average is $206,000.

Businesses can get up to 2.5 times their total monthly payroll (with a maximum of $10 million). The Small Business Administration has set an interest rate of 1 percent on the loans, and repayment will be deferred for six months.

"I'll be 68 this year and I'm thinking about my employees more than anything," Kaufman said. "That’s my focus. Not that I don’t benefit as well, but how can I keep it going for them."

Kira Wendel opened Swoon, a gift shop in Milwaukee's Washington Heights neighborhood in October 2016. Since the pandemic, she has closed her store, but has it open for online sales and curbside pickup four days a week.

Wendel applied for an economic injury disaster loan (EIDL) in late March and while she was waiting to hear if she received it, the PPP loans were announced. She has received both, totaling just over $10,000. She said online sales have helped, but right now, her weekly sales total what she used to make in a day. The loans will help her keep her employees from having to file for unemployment.

"As much as it’s scary to take out a loan during this time of uncertainty, my main focus is to continue to pay employees so they don’t have to continue to navigate unemployment because its’ a whole other overwhelmed system right now," she said.

Editor's note: This story has been updated to correct a quote from Kira Wendel.