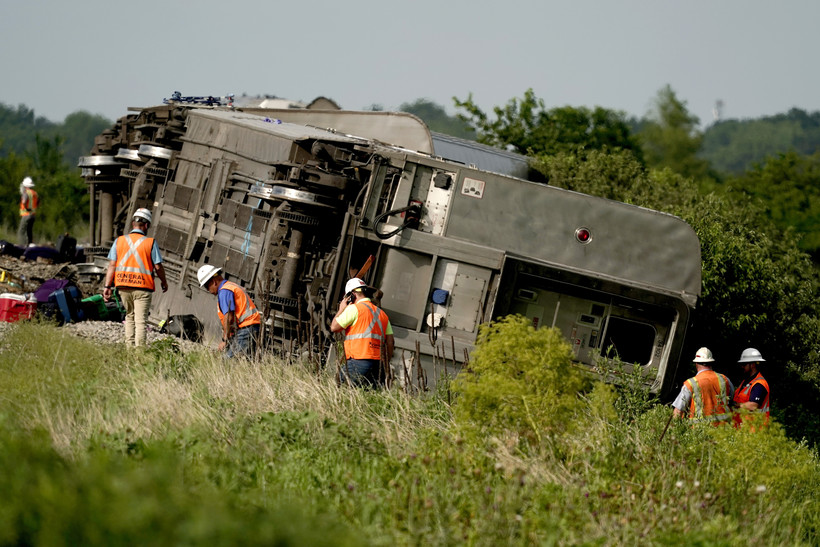 Workers inspect the scene of an Amtrak train which derailed after striking a dump truck Monday, June 27, 2022, near Mendon, Mo. AP Photo/Charlie Riedel

Scouts were returning home from a trek in New Mexico
By Bridgit Bowden
Share:

A group of Boy Scouts from Appleton was on board when a passenger train derailed in Missouri Monday.

Sixteen scouts and eight adult leaders were headed home from a trek in New Mexico when their Amtrak train hit a dump truck and derailed in the rural city of Mendon, Missouri. According to Amtrak, roughly 275 passengers and 12 crew members were on board at the time.

The train not only went off the tracks but also flipped on its side. Some scouts helped get passengers to safety, said Boy Scouts of America media relations director Scott Armstrong.

"They rendered first aid, they helped a lot of people climb out of the train car that was on its side and made sure they got to proper medical personnel and ambulances," he said.

Four people died in the crash, and at least 150 others were injured. One of the fatalities was the driver of the dump truck.

The scout's 15-year-old "patrol leader," or top scout, found the driver at the point of impact. He attempted first aid and comforted the driver, Armstrong said.

Three of the adult scout leaders remain hospitalized in Missouri, Armstrong said, although their injuries are not life-threatening. One scout required medical attention, Armstrong said, and nearly all the passengers had "bumps and bruises."

The scouts were returning from a trip to Philmont Scout Ranch, a 10-day, 100-mile trek through the high desert New Mexico Mountains.

"They were well-prepared for the adventure of a lifetime, they just got a little more than they bargained for this time around," Armstrong said.

Being older scouts and having prepared for the trip to Philmont, Armstrong said the scouts "almost assuredly" had earned merit badges in first aid, and likely in emergency preparedness. At least half of the adult leaders would have received extensive training in wilderness first aid and survival in preparation for the trip, he said.

The train was traveling from Los Angeles to Chicago.