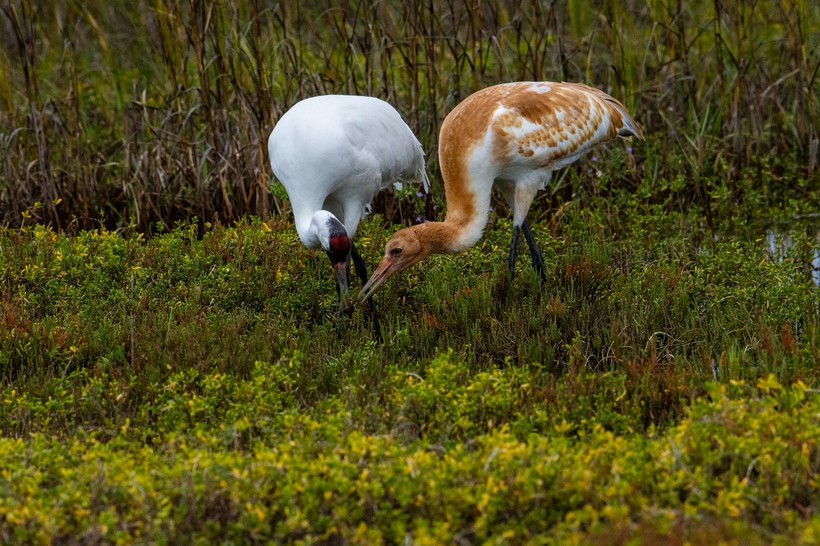 The birds cause trouble for Wisconsin farmers, but recent crane shootings in Oklahoma have raised concern among advocates
By Diane Bezucha
Share:

Less than a century ago, it was rare to see a sandhill crane in Wisconsin. Having dwindled to about 15 breeding pairs in the 1930s, the eastern population was nearly extinct.

But 70 years of conservation efforts and curtailed hunting helped the population rebound to nearly 95,000. Now, they are the most abundant crane species — a common backyard bird whose appearances and bugling calls herald the changing of the seasons.

But the sandhill’s close relative, the whooping crane, faces a similar challenge, with only about 500 remaining in the wild. Each year, they migrate through the central flyway from their Canadian breeding grounds to spend the winter in Texas.

Since 2001, conservationists have worked to reintroduce experimental whooping crane populations in Wisconsin and Louisiana through captive breeding programs.

"We want them to be the other conservation success story here in Wisconsin," said Anne Lacy, senior manager of North America programs at the International Crane Foundation in Baraboo.

But a Republican-backed bill could put their recovery at risk by opening a sandhill crane hunting season in Wisconsin.

While hunting sandhill cranes is common in several states, whooping cranes are federally protected by the Endangered Species Act. Killing one can mean a year in prison and a $100,000 fine. But the two species look similar and follow similar migration routes, so advocates are concerned whooping cranes could be inadvertent casualties of a sandhill crane hunting season.

"Even one adult (whooping crane) that is taken out of this population has pretty grave consequences for the success of this reintroduction," said Lacy.

In December, four whooping cranes were shot and killed in Oklahoma during the state’s sandhill crane hunting season. Wade Farrar, assistant chief of law enforcement with the Oklahoma Wildlife Department, called the killings "sickening." Authorities are still searching for those responsible.

The proposed Wisconsin law, sponsored by Sen. Mary Felzkowski, R-Irma, and Rep. Paul Tittl, R-Manitowoc, was introduced last October. Since then, the bill has been discussed at a public hearing, passed through committee and is awaiting a floor vote in the Senate.

While the bill has approval from several pro-hunting groups, much of the support comes from farmers who say an overpopulation of sandhill cranes causes significant crop damage.

Dave Wilfert’s family has been farming in Wisconsin since the late 1800s. His 700-acre farm in Two Rivers grows a variety of grains and produce for manufacturers, canners and a farm market.

While Wilfert is used to dealing with a degree of seasonal crop damage from deer and geese, he said sandhill cranes have become a growing problem over the last two years. Where he used to see a few pairs of cranes, now he sees flocks of 50 to 60. 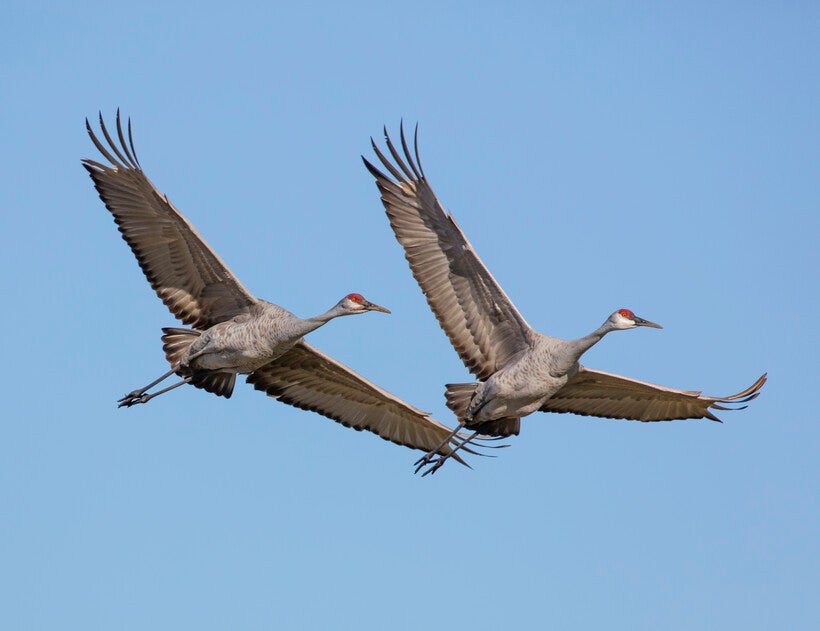 "Well over 60 percent of the bean seed was eaten by the birds, and therefore it made for half a crop for us," said Wilfert.

This is bad enough in his canning fields where his green beans sell for 10 cents a pound, he said. But if the cranes go after his farmers market beans, he’s losing $2 per pound.

Advocates say there are alternatives to hunting, but farmers say they have limited options left

But Lacy, with the International Crane Foundation, and other opponents of the bill say hunting sandhill cranes is not the answer.

"A fall hunting season will not do anything to curb a crop damage problem that cranes do in the spring," Lacy said.

Wilfert said the sandhill cranes he sees have become more of a year-round fixture, which is a challenge when he does 12 to 14 green bean plantings over the spring, summer and fall.

"We open ourselves up every time we plant to having a fresh dinner table prepared for those guys to come in and clean out on us," said Wilfert.

"We have done the field testing for decades on this material on cranes in cornfields and I can tell you 100 percent that this is effective at keeping cranes from damaging corn," Lacy said.

But these chemical repellents are expensive. And Wilfert said many of them are only approved for corn. Wilfert’s cranes prefer his green beans.

He said he has tried bird scare guns, balloons and other noisemakers.

"It can end up taking a lot of time to do all of this," said Wilfert. "And the deterrents that I've seen don't ever last very long because the birds soon get used to whatever you're doing for (them) and they walk right past it."

State and federal programs already allow farmers to shoot sandhill cranes (and other animals) on their property if they can show proof of crop damage, have exhausted alternatives and obtain proper state and federal permits.

Wilfert said he’s worked with hunters to go after deer and Canadian geese, though never sandhill cranes, and ultimately it is too time-consuming to manage round-the-clock.

"With the tightness of labor that's happening in the country, and especially in agriculture, we don't have the manpower to hire a bunch of people to try to curb this with some type of man-made chase," said Wilfert. "My preference is to have the government do a better job of regulating a hunt so that these populations are held in check."

The bill would require hunters to get permits and participate in an education program, which would teach hunters key differences between the cranes. 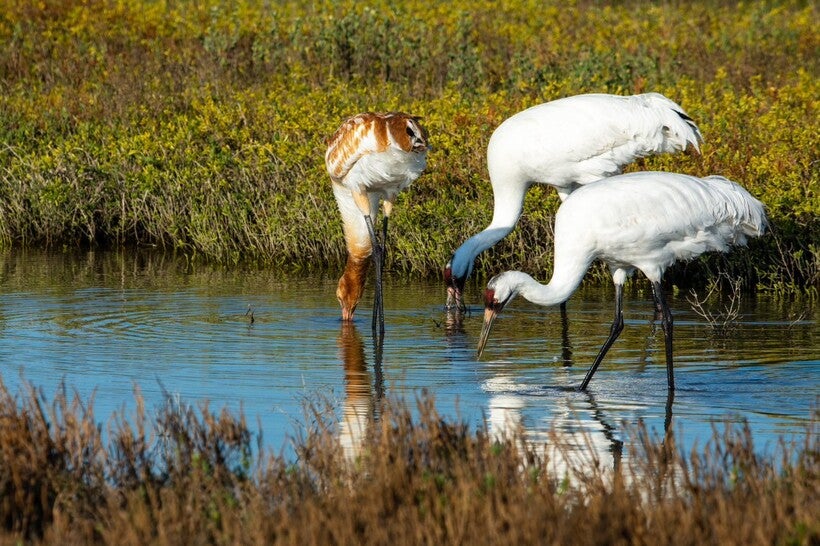 Whooping cranes are taller than sandhill cranes, with bright white feathers and black wingtips. But Lacy said juvenile whooping cranes have light brown feathers that make them harder to discern from sandhills.

And population recovery is more than just a numbers game. It’s a waiting game.

Liz Smith, director of North America programs at the International Crane Foundation said cranes mate for life, but they reproduce slowly. A bonded pair of cranes typically won’t start producing offspring until about seven years into their relationship. And even then, they may only see a fledgling survive once every three years.

"The fact that these birds (in Oklahoma) were adults and potentially reproductively active — we've lost that recovery potential in those four birds," said Smith. "It really is quite a blow."

According to data from the International Crane Foundation, 47 whooping cranes have been illegally shot and killed in North America since 1967 when they were first listed as an endangered species.

And Smith said the shootings could be more prevalent than the data shows. Whooping cranes in Wisconsin's reintroduced populations are tagged and closely monitored, so it’s easy to tell when something is wrong. But Smith said only about 15 percent of the remaining wild population are tagged.

Despite their abundance, sandhill cranes themselves are fairly recently recovered across the Midwest. Advocates say more research is needed on how a managed hunting program would impact sandhill crane populations in Wisconsin. (When Wisconsin’s wolf hunt was first introduced, hunters blew past the quota in just three days). Most of the existing sandhill seasons are in states that are wintering grounds for the cranes, but Wisconsin is a sensitive breeding ground.

Lacy said the idea of a sandhill crane hunting season has come up periodically for decades, but the motivation is often driven more by pest control than sport. Lacy is a hunter herself and she said most of the hunters she speaks to are not that interested in hunting cranes.

"Overpopulation is subjective," said Lacy. "It really isn't as black and white as, ’They’re abundant, so we should hunt them.’ I really think it's time to start having conversations about, 'Is that how we want to treat our natural resources?’"

And advocates say there is a lot to lose.

"There is just something about cranes that people can identify with," said Lacy. "They stand on two legs and can look you in the eye."

At five feet tall, the whooping crane is North America’s tallest bird. And sandhill cranes may be the oldest bird species still in existence, with fossil records dating anywhere from 2.5 million to 10 million years ago.

Their graceful courtship dances and distinctive calls offer a glimpse of the prehistoric.

"They're unusual. They're rare in terms of diversity," Smith said. "They're just magical."