A screenshot from a video released by the Green Bay Packers on Friday, June 5, 2020, speaking out against racism after the death of 46-year-old Minneapolis man, George Floyd, at the hands of police in May.

Wisconsin Athletes, Teams Speak Out In Support Of Protesters

On March 12, the NBA announced it would suspend its season due to the coronavirus pandemic. Aside from donating $100,000 to support arena workers, Milwaukee Bucks superstar Giannis Antetokounmpo laid pretty low, posting pictures on social media of family trips to the beach.

That was until about a week ago. Now Antetokounmpo is among the many Wisconsin professional athletes who have spoken out in support of protesters across the state, who first took to the streets 11 days ago to demonstrate against the killing of George Floyd. Floyd, a 46-year-old black man, died at the hands of police in Minneapolis late last month.

Antetokounmpo, along with teammates Sterling Brown, Brook Lopez, Donte Divincenzo and Frank Mason, surprised protesters Saturday by joining them as they marched down 27th Street in Milwaukee. The players wore masks and matching T-shirts reading "I can’t breathe." Those were the last words Floyd spoke.

I really don’t know how to put into words exactly how I feel, but one thing I know for sure is that enough is enough! It’s time for change! #GeorgeFloyd #AhmaudArbery

"I want my kid to grow up here in Milwaukee, and not to be scared to walk in the streets," Antetokounmpo told demonstrators over the megaphone.

On Sunday, the Bucks hosted a protest in support of social justice beginning at the plaza outside Fiserv Forum. It was led by Brown, who sued the Milwaukee Police Department for using excessive force during an incident in 2018. Police officers Tasered and arrested Brown over a parking violation. 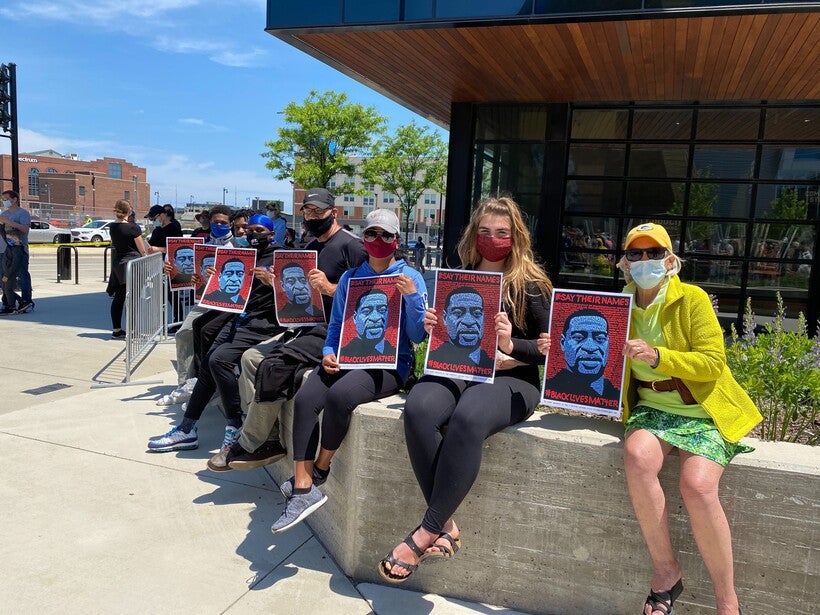 Basketball’s elder statesman, Kareem Abdul-Jabbar, helped lead the Bucks to their first and only NBA title nearly 50 years ago. He recently penned a column for The Los Angeles Times that has been widely shared.

"Racism in America is like dust in the air. It seems invisible — even if you’re choking on it — until you let the sun in. Then you see it’s everywhere," he wrote.

Earlier this year, Abdul-Jabbar told Wisconsin Public Radio that he believes activism is becoming more acceptable in the NBA. But recent events have inspired athletes from other leagues to get involved too.

Lorenzo Cain, an outfielder for the Milwaukee Brewers, participated in a discussion Friday hosted by Bob Kendrick, president of the Negro Leagues Baseball Museum, broadcast on MLB Radio Network.

Cain said he felt torn back in 2016 when NFL quarterback Colin Kaepernick began kneeling during the national anthem to protest police brutality. Cain wanted to support the cause but didn’t want it to end his career. Now, there can be no questions about why Kaepernick knelt, he said. 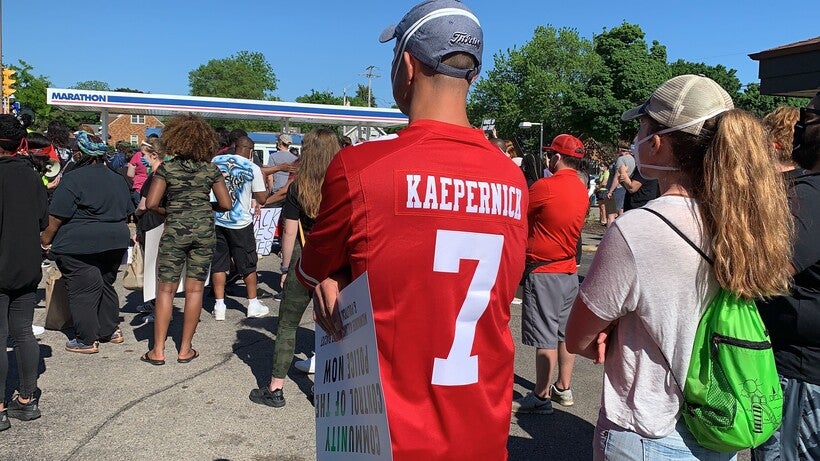 On Saturday, June 6, 2020, a large group of protesters gathered in Wauwatosa to seek justice for three men of color who were killed in separate incidents by the same police officer. Several protesters wore Colin Kaepernick jerseys. The former NFL quarterback protested police brutality by kneeling during the national anthem. Megan Hart/WPR

The video of Floyd’s death was hard to watch and to explain to his own children, Cain said.

"George Floyd was somebody’s son. I couldn’t even imagine if I saw my son with a cop with his knee on his neck, what I would do in that situation," he said.

The conversation is ongoing, he said. One of the first things to come out of it was a video released Friday featuring players like Davante Adams, Aaron Rodgers and Billy Turner calling for change.

"People who look like me should not be afraid around law enforcement," safety Adrian Amos said in the video, which has been liked more than 17,000 on the Packers’ Facebook page.

It's time for change. pic.twitter.com/AS7wP9qz2x

Discussions among the team have been very open, Turner told PackersNews.com.

"Just getting to know those guys over the past year, it’s very evident to me that they care about other people. It doesn’t matter the color of your skin," he said.

The NFL has faced criticism in the past when it’s come to racial issues. In a video released last week, commissioner Roger Goodell said the league mishandled its response to player protests in the past.

Before protests began, the NFL took steps to address its historic lack of people of color in management positions.