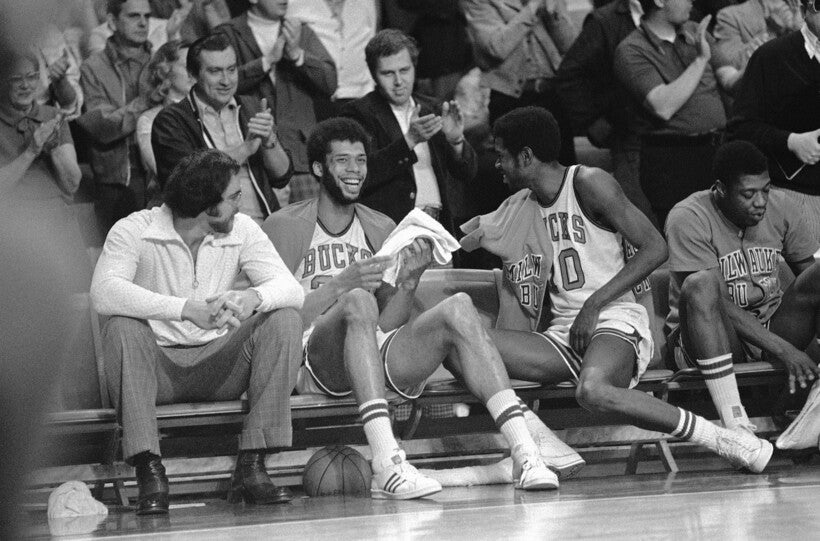 Bucks center Kareem Abdul-Jabbar laughs as he sits on bench and watches the last few seconds of Bucks-Chicago Bulls NBA playoff game on Saturday, April 22, 1974 in Milwaukee. Abdul-Jabbar was the game's leading scorer with 32 points to help the Bucks win, 113-90. Milwaukee now leads 3-0 in the best of seven playoff series. AP Photo

The Milwaukee Bucks will take on the Los Angeles Lakers on Friday night at the Staples Center. With the top two records in the NBA, both teams are leading their respective conferences.

Kareem Abdul-Jabbar, the league’s all-time leading scorer, started his NBA career in Milwaukee and ended it in L.A., winning six world championships along the way. When speaking to Wisconsin Public Radio last week, he declined to make a prediction on who will hoist the Larry O'Brien Trophy as NBA champions at the end of the season.

"I've been getting a lot of questions about who's going to be in the finals, so I can't answer them," he said. "All I can say is it will probably be a team I used to play for. That's it."

While in Milwaukee, Abdul-Jabbar, who retired from the NBA in 1989, attended a Bucks game and participated in a discussion on diversity and inclusion hosted by the team. He’s been back in the Cream City a couple times in recent years, he said.

"It's nice to be back and see the team doing well, and the arena's really state of the art," he said. "It's beautiful."

With the first pick in the 1969 NBA Draft, the Bucks chose Lew Alcindor. (That was Abdul-Jabbar’s name before he changed it in 1971). He quickly helped the fledgling franchise achieve success. In his first year with the team, he led the Bucks to 56 wins — 29 more than they tallied the previous year.

Led by Abdul-Jabbar, the Bucks won their first and only world championship in 1971. They recorded a franchise record 66 victories that year, a number they’re on pace to top this season.

In 1975, Abdul-Jabbar, who grew up in New York City, requested a trade to a larger market that felt more like home. He was sent to L.A., where he cemented his legacy as one of the greatest NBA players in history.

Some fans in Milwaukee were upset. But Abdul-Jabbar kept his connections with the Bucks, he said.

"I still had friends here," Abdul-Jabbar said. "The former owner of the team and I were friends, so it was easy for me to come back and re-establish contact." 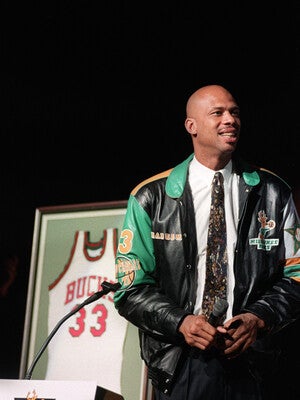 Former Milwaukee Bucks center Kareem Abdul-Jabbar pauses while fans cheer as the Bucks retire his jersey (33) during a pre-game ceremony in Milwaukee on Saturday, April 24, 1993. Abdul-Jabbar led the Bucks to the championship in the 1970-71 season. Joe Picciolo/AP Photo

NBA Players Are Making A Difference

Abdul-Jabbar has often used his platform to draw attention to issues outside of basketball. It began early in his career.

As an amateur at the University of California, Los Angeles, where he won three consecutive national championships, he was invited to try out for the 1968 Olympic team. He declined, deciding to boycott the Olympics rather than represent a country that was so cruel to people of color. Abdul-Jabbar retired before NBA players were allowed on Olympic rosters in 1992.

His activism continued beyond his basketball career. In 2016, former President Barack Obama awarded Abdul-Jabbar the Presidential Medal of Freedom.

"He stood up for his Muslim faith when it wasn’t easy and wasn’t popular," Obama said at the ceremony. "He’s as comfortable sparring with Bruce Lee as he is advocating on Capitol Hill or writing with extraordinary eloquence on patriotism."

Abdul-Jabbar said activism has become more acceptable in the NBA, especially among players.

"Each of them has their own take on what is a crucial need, but the ones who see a need are doing something, and they're using the incredible wealth that they are getting in very positive ways," he said.

He specifically cited the work Lakers’ LeBron James has done for students in his hometown of Akron, Ohio, where he opened a public school. It was announced last month that 193 students in the school’s junior class would receive free tuition to Kent State University.

Abdul-Jabbar was named MVP of the NBA a record six times during his career. He won three of those awards with the Bucks. No other player has ever won multiple MVPs in Milwaukee, but that could soon change.

The Bucks' Giannis Antetokounmpo currently holds the title and is considered the favorite to win it again this season. He’s a strong defender — the Bucks have the top-rated team defense in the NBA — and is averaging 30 points, 14 rebounds and six assists per game.

In February, Antetokounmpo averaged 25 points and 15 rebounds a night without dropping a game. According to ESPN, he’s just the second player in NBA history to play at that level over the course of a month. The first was Abdul-Jabbar in March 1973.

Antetokounmpo is from Athens, Greece. Growing up in a country not known for producing basketball players makes Antetokounmpo’s ascendancy even more impressive, Abdul-Jabbar said.

"I think Giannis is pretty amazing in that he learned how to play the game in a place that you wouldn't expect," he said. 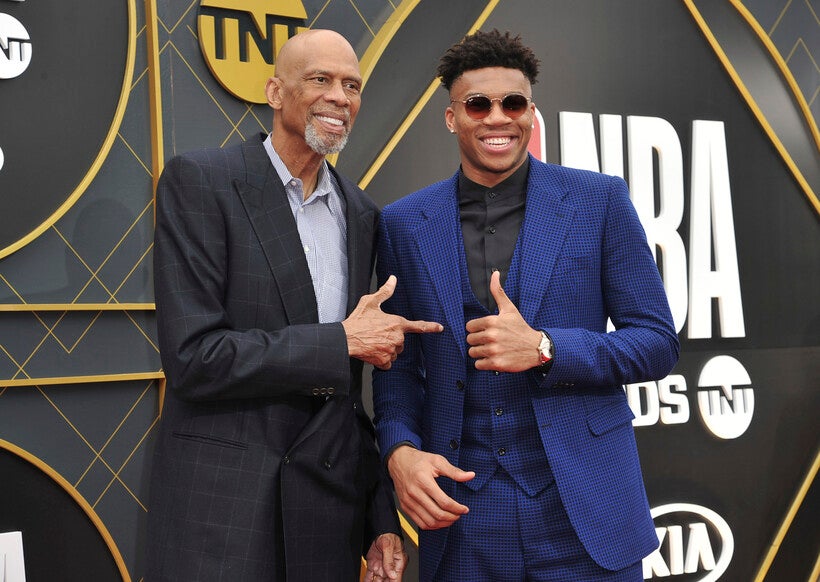