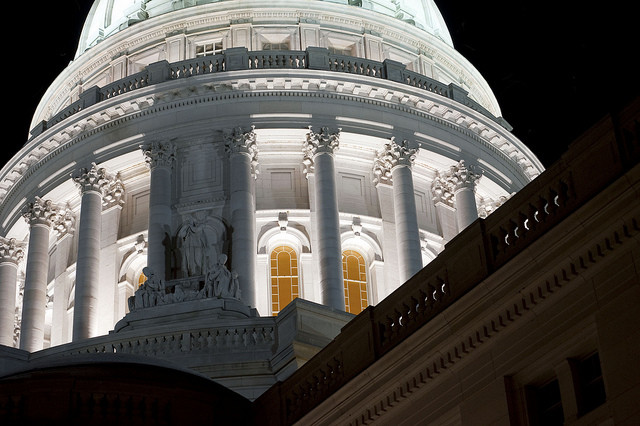 Students who disrupt campus events at University of Wisconsin System schools could be expelled under a bill approved Wednesday by the state Assembly.

Under the proposal, students who are found guilty of engaging in "violent or other disorderly conduct that materially and substantially disrupts" others’ free expression would be suspended after two offenses and expelled after three.

The measure is sponsored by Assembly Speaker Robin Vos, R-Rochester, who has said he believes it to be "one of the most important" bills to be taken up by lawmakers this session.

"One of our fundamental rights, one of the most important parts of being an American, the right to free speech, is under attack," Vos said during debate. "On far too many college campuses, different points of view are not even allowed."

The bill would allow any person to report another person for disrupting free expression. A formal investigation and disciplinary hearing overseen by the UW System’s Board of Regents would be required for anyone who has been reported twice for such disruptions.

The proposal also requires UW System institutions to provide training and orientation on the new speech policies to students and employees.

Opponents to the measure argue it would infringe upon the free speech of rights of students who want to protest campus speakers.

"The problems with this bill: it is an unconstitutional bill, it is a gag order," said Rep. Chris Taylor, D-Madison. "It basically gags and bags the First Amendment."

The bill, which passed 61-36, now moves to the state Senate. One Republican, Rep. Bob Gannon, of West Bend, joined Democrats in opposing the bill.

Another measure passed by the Assembly on Wednesday would limit who can request a presidential recount in Wisconsin.

Under the proposal, only candidates who finish within 1 percent or less of an election winner can request a recount.

The rules would have prevented the presidential recount requested and paid for by Green Party candidate Jill Stein last year. Stein finished fourth in Wisconsin’s presidential election, with about 1 percent of the vote.

"She demanded a recount that was frivolous, that was emotionally charged and politically charged, she wasted the time and effort of our county clerks, our Republican and our Democratic volunteers, and others," said Rep. Ron Tusler, R-Harrison, one of the bill’s sponsors, of Stein’s request.

Supporters of the measure have also argued some recounts place an unnecessary burden on local elections officials.

Meanwhile, opponents say any candidate should be able to request a recount.

"Recounts are absolutely important in democracy, and to take away recounts is a step corrupting the system," said Rep. Fred Kessler, D-Milwaukee.

The bill passed on a voice vote and heads to the state Senate.

The Assembly passed a plan on a voice vote that would help people replace contaminated wells in places like Kewaunee County, where up to 60 percent of wells contain fecal microbes.

The proposal by Rep. Joel Kitchens, R-Sturgeon Bay, would let cities, villages, towns or counties offer low-interest or interest-free loans to fix or replace wells or septic systems. It would also increase funding for a state grant program to replace wells.

"We’re getting clean water right now to people who need it," Kitchens said.

The plan would let local governments recoup their costs through a well owner's property tax bill.

Some Democrats argued the plan did too little to address the cause of the contaminated water, namely the high concentration of manure spreading in areas of the state with shallow soil.

"We’re in a real crisis," said Rep. Cory Mason, D-Racine. "We have a responsibility before us to do something real and substantial to address the problem."

A coalition of environmental, agricultural and local government groups support the plan.

People who manufacture or sell drugs derived from fentanyl could face up to 15 years in prison under another measure that passed on a voice vote Wednesday in the Wisconsin Assembly.

Rep. Joel Kleefisch, R-Oconomowoc, said it would close a loophole that lets people who deal so-called fentanyl "analogs" escape harsher penalties, even though those drugs can be even more dangerous than heroin.

"Chemists out there and dealers out there who are changing the molecular structure slightly to subvert the law will now be able to be held and prosecuted to the fullest extent of the law," Kleefisch said.

Using a credit card "skimmer" to steal someone's personal information would become a felony in Wisconsin under a measure the Assembly sent to Gov. Scott Walker's desk.

"This is one of those that will help law enforcement, prosecutors, put more teeth into this issue we're having throughout the state of identity theft," said Rep. Rob Summerfield, R-Bloomer.

The plan would shield gas station and ATM owners from lawsuits if skimmers are installed on their machines without their knowledge. Democrats argued against that provision, saying technology exists now to make card readers more secure, and gas station owners should be expected to use it.

"We are actually giving immunity to gas stations whose pumps may not be secure," said Rep. Lisa Subeck, D-Madison. "The people who would suffer are the people whose credit cards are skimmed, and they don't have a course of action if that happened due to a negligent business owner."

There would be an open hunting season for woodchucks in Wisconsin under another proposal that passed the state Assembly.

Rep. Andre Jacque, R-De Pere, said there was no justification for keeping woodchucks, also known as groundhogs, on a list of protected species.

"Farmers and gardeners fear groundhogs because the animals eat up their crops and dig holes in fields that may damage plows or trip up livestock," Jacque said, noting the animals were considered pests in other states.

Rep. Gary Hebl, D-Sun Prairie, said groundhogs were beloved in his city, which celebrates "Jimmy the Groundhog" every February.

"I have a great love for groundhogs, there's no doubt about it," Hebl said. "I have not heard any good reason why we want to kill the groundhogs."

The proposal passed on a voice vote.