The Wisconsin Assembly voted again Tuesday on a bill that would eliminate extra federal money for unemployment benefit recipients in Wisconsin, but Republican support for the measure wasn't enough to override a veto from Democratic Gov. Tony Evers.

The GOP attempt to override Evers' veto fell short of the two-thirds vote threshold necessary to do so. It passed on a vote of 59-37, with Republicans voting in favor and Democrats against.

The bill, which was first approved by the GOP-controlled Legislature last month, would have barred Wisconsin from participating in the federal program that provides $300 a week in additional unemployment aid to benefit recipients. More than two dozen states have passed similar measures already this year. The bill would have also blocked the state Department of Workforce Development from waiving work search requirements for unemployment benefits because of the COVID-19 pandemic.

In his veto message, Evers said people who lost jobs during the pandemic need the additional support. He said eliminating what he called a "lifeline" would prevent people from taking steps to reenter the workforce.

During debate, Republicans argued the extra money makes it too easy to stay unemployed, and pointed to businesses across the state that are struggling to hire workers.

"Government is doing something right now that works against these businesses, works against our economy," said Rep. Mark Born, R-Beaver Dam.

Rep. Shae Sortwell, R-Two Rivers, argued the state is "paying people money not to work." He said employers in his district that are offering $18-$20 dollar-an-hour jobs are still struggling to find workers.

"If employers are offering $20 an hour, and you're currently getting unemployment at $18 (an hour) ... we are then going to say that you should go to work for $2 an hour," Sortwell said.

According to the state Department of Workforce Development, the maximum state weekly unemployment payment is $370 a week, depending on the worker's prior income. Combined with the $300 in additional federal benefits, that would amount to $16.75 an hour for a 40-hour work week.

Democrats pushed back on Republicans' arguments, arguing that eliminating the extra federal money wouldn't be enough to solve Wisconsin's worker shortage. They said there are other barriers to going back to work, such as child care shortages that have been exacerbated by the pandemic, continued concerns about contracting COVID-19 and inadequate public transportation. Some workers have also struggled to find jobs that align with their skills and abilities.

Rep. Francesca Hong, D-Madison, argued the state has "had a low-wage crisis for decades."

"If people are making more on unemployment, that's on us, that's not on them," she said.

There have been conflicting studies and analyses about whether the additional federal aid has affected the workforce. One analysis by Morgan Stanley economists found little change after some states ended the additional support, while a May paper from the Federal Reserve Bank of San Francisco found small job search disincentive effects of the $300 weekly supplement.

The federal benefits are scheduled to end in September, regardless of individual states' actions. 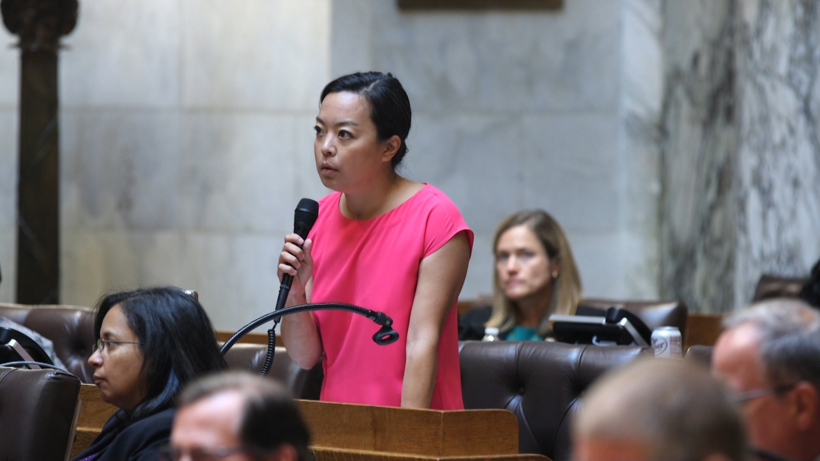 State Rep. Francesca Hong, D-Madison, speaks during an Assembly session on a bill that would eliminate extra federal money for unemployment benefit recipients in Wisconsin. Will Kenneally/PBS Wisconsin

Evers also called lawmakers into a special session Tuesday to consider his proposal to increase state education spending by $550 million, but Republicans didn't hold any debate or take any votes on his plan.

Both the Assembly and Senate convened and immediately adjourned the special session around 2 p.m. on Tuesday afternoon.

"We do not have a crisis level for funding our schools," Vos said.

When Evers called the special session, the GOP co-chairs of the Legislature's state budget committee called the move "political posturing" and argued the existing state spending plan for schools accounted for "massive" federal funding, "made significant investments" and is respectful of taxpayers.

GOP lawmakers approved an education budget that was roughly $750 million less than the governor originally requested for K-12 schools. For the University of Wisconsin System, the GOP-backed budget included an increase of just $8 million over two years, a fraction of the $191 million proposed by the governor.

The GOP-controlled Legislature has bypassed other special session calls from the governor previously. Those special sessions, which the governor has used to highlight his priorities, were intended to focus on issues including Wisconsin accepting the federal Medicaid expansion, changing policing laws in the state and updating the state unemployment system.