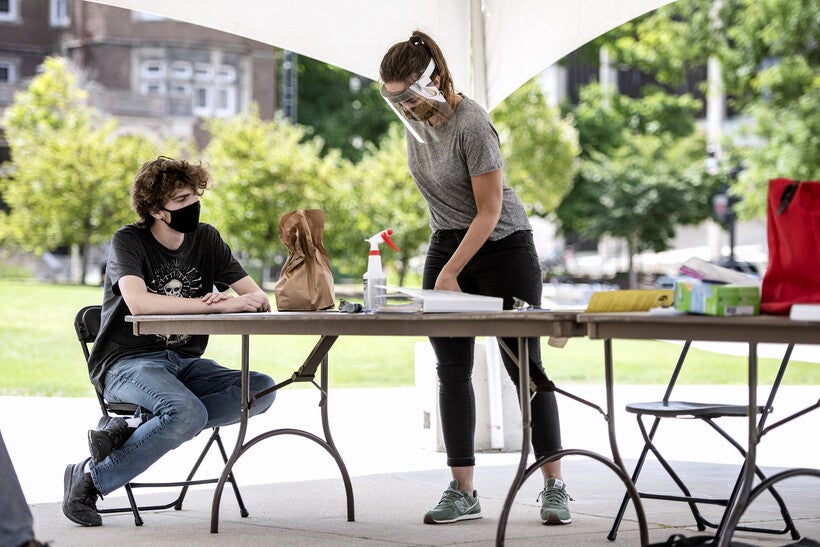 In Wisconsin, 2020 May Hinge On The Youth Vote — And Some Are Optimistic That Young Adults Will Turn Out

A recent study out of Tufts University says Wisconsin is the state where voters ages 18-29 will have the most effect on the presidential election. Those voters, though, have historically lagged far behind older age groups in actually casting a ballot, despite the fact that many report wanting to vote.

But people who work with young voters, teaching them about the electoral system and helping them register and make a voting plan, are optimistic — and say young voters often get a bad rap.

David Olson, a civics and government teacher at James Madison Memorial High School in Madison, orients his AP U.S. government class lesson plans around the election schedule, so he makes sure students are educated about the mechanics of voting, even if they're not yet eligible to cast a ballot themselves. He said the notion that students aren't engaged isn't borne out in his classroom. In fact, he said he hears more from students who are disappointed they can't vote yet.

"I've heard from many students who have decided to tell me, like, how many days short their birthday is — like, 'My birthday is in mid-November, I'm 14 days short,'" he said.

Rather than not caring about elections, he said, their obstacles to voting are more logistical. He said he's been surprised by how many of his students don't drive — and without that motivation to visit the state Department of Motor Vehicles, they're not as likely to have a state-issued ID that makes it easier to register. They're also more likely to move, especially when they get to college, and may not remember to update their voter registration each time. That's likely to be even more common this year, as many young adults are moving back in with their families due to COVID-19.

Kade Walker is an organizer in Wisconsin with NextGen America, an organization that's working to mobilize the youth vote for pro-climate Democratic candidates. He said he's personally moved about "10 times in the past four years," in part because of changing residences while in college. Working on keeping transient voters up to date is one major focus of NextGen's push, he said, while another is learning about the issues and providing resources that help prepare students.

Lately, it's also included a lot of outreach around absentee voting.

Since many of Olson's students aren't yet 18, he said he encourages them to go with someone who is eligible and see what the process looks like.

"To me, that exposure is really key to understanding what this process looks like," he said. "Being civically engaged is a muscle, and you gotta exercise it. Until students get the introduction and participate, there's a barrier to entry."

In a recent episode of the "Ways and Means" podcast from Duke University, professor Sunshine Hillygus noted young would-be voters may also have less predictable schedules than adults who work a 9 a.m. to 5 p.m. job, which can make it hard to make a voting plan or to keep track of registration deadlines.

Walker said he's optimistic this will be a good year for young voters.

"Young voters now, more than ever, believe that their voice has power to change their government and the systems around them," he said. "If you just look out at the last four years in Wisconsin, you see tons of huge protests and social movements that have been largely led by young people."

Young people have driven marches around gun laws and walk-outs over climate action. They showed up in droves to marches for Black lives around the state. The Madison and Milwaukee's school districts' decision to terminate their contracts with their local police departments followed years of advocacy by the youth-led groups Freedom Inc. and Leaders Igniting Transformation.

Though voter turnout wasn't as high for young voters in 2018 as for the older blocs, Gov. Tony Evers' substantial lead among young voters likely propelled him to a narrow victory over former Gov. Scott Walker.

Olson said his students are engaged around a wide range of issues that have come to the fore over the last several years, and even in the last six months. He had them submit to a project by KQED, a San Francisco radio station, about what young people are thinking about in the run-up to the election. Their responses ranged from climate change and gun laws to ranked-choice voting and U.S.-China policy.

"There are not many students — when we talk about problems facing this country, or challenges, or debates — there are not too many students who throw up their hands and say the system's rigged, or things are corrupt, or it will never change," he said. "I generally see students who approach those problems and say, well, why does it have to be this way, or does it have to be this way, and what are ways that people actually make change?"